He was posted to the fighter Grupo 12 in Granada, where it also caught the beginning of the francoist rebellion. From Madrid it came to government regulation, to ensure control of the airport of Granada - Armilla, but Guerrero instead immediately joined pučistům. Even secured the rebels a considerable fighting force – 21. 7. 1936 at the airport Armillo landed three of the republican Nieuport-Delage NiD. 52, which from here should operate against the rebels. The airport, however, only a few hours ago took over pučisté and republican pilots immediately after landing they wandered into captivity (later, all three went to the side of the pučistů).

Three airworthy fighter machines accounted for the rebels in this area of considerable combat power. Pučisté because initially captured 73 aircraft, but it was only 8 fighters, Nieuport-Delage NiD. 52. Of this, however the time was neither airworthy; all were undergoing repairs.

The aircraft were urgently přelétnuty to Seville and to fix neletuschopných aircraft feverishly worked. In jihošpanělském space (base Granada and Sevilla) there were a total of 17 fighter pilots who, with these machines should fly; Teniente (commander) Guerrero García was among them and quickly became famous as one of the most successful fighters of the initial period of the war, when for 8 days, shot down over Andalusia four republican aircraft.

Combat actions were launched immediately 21. 7. and three later, one of the Guerrero's colleagues had reached the cabin of one of the three above-mentioned Nieuportů victory of the republican machines of the same type.

Two days later, i.e. 25. 7., his success he repeated himself a Guerrero if when you return from a courier flight to Morocco on the Nieuport NiD. 52 shot down over the sea of republican seaplane Dornier Wal. 29. 7. then Guerrero added another success to shoot down Vickers Vildebeest in Iznajar, two days later destroyed the machine of the same type in Iznallos and 1. 8. in the end, one CASA – Breguet 19.

Guerrero on Nieuportech flew 67 sorties and with his 4 kills was among the most successful fighters on this type.

As such, it was in march, 1937, relegated to the newly emerging Escuadrille 3-E-2, which from the Germans (who at that time began to rearm Bf 109) took their He 51. In April, however, was transferred to the newly emerging first Spanish Grupo flying to Fiatech CR.32. The unit originally consisted of only 6 Fiats CR.32 Escuadrilly 1-E-3 and six pilots, who formed the flower of the rebel air force. Guerrero was among them. During April the unit has taken over other fiat cars and her condition is now accounted for 13 aircraft and 15 pilots. 4. may in Cordóbě officially formed the Grupo 2-G-3, whose commander was García Morato. Teniente Guerrero García was assigned to the Escuadrilla 1-E-3. Unit in June moved to the airport in Zaragoza, to support the offensive on the northern front. The task of the Spanish Fiats were especially escorts bombers and attacks on on-board weapons on the ground targets.

To confrontations with the republican air force occurred only sporadically, because of their fighter forces on this front were very weak. Similarly, the ongoing fighting in the autumn of 1937 about Asturias. In the spring of 1938 was Guerrero promoted to the rank of Capitána and took over command of the newly formed Escuadrillo 5-E-3. In this position, then stayed until the end of the war.

Guerrero during the fighting showed a significant pilot quality, though his sturdy figure of him as a fighter disadvantage - he had znčné problems to get into the cockpit of the CR.32, but luckily for him he's never had to jump a parachute. Alone, on the contrary reached a total of 13 kills.

Miguel Guerrero García flew during the war 1050 operating hours during the 575 sorties, with 794 hours and 438 flights at the Fiat CR.32. In the table nationalist ec finished in eighth place.

He was awarded the Individual Military Medal, after the war, he commanded the fighter unit in Morocco. During his career, reached general's rank, he passed a variety of command functions, he was later a member of the general staff and performs also diplomatic assignments in the united states. In 1970, he was appointed commander of the 1. circle of air Spain. In 1979 he retired. He died in Madrid in 1992. 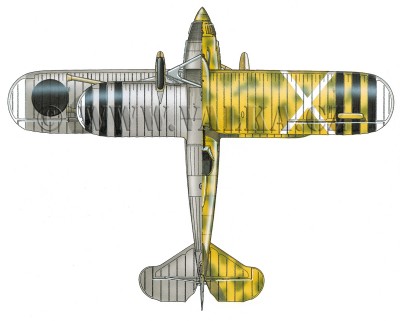