He was born 2. 4. 1875 as the only son of his parents, who owned the mill close to the village watering hole. In June 1876, however, the mother died, which snapped completely of his father. He then sold the mill and all the property and went into the world to forget about (he's stayed mainly in the Balkans). Little Josef was entrusted with the education of the financially secured by the grandparents and father used to see only occasionally a few times, until it remained only in written contact.

After graduating four classes of elementary school in Jičín and in the Railroad started to study on the German real-school in Trutnov. This allowed him to at the same time, outside of the English to dominate the language to German. She started in it but the echo of his restless blood. In 1889 while still a student, he escaped into the world and went to Constantinople. After the exhaustion of the funds has been caught at Trieste and handed over to the relatives. He was expelled from high school. Transferred then to a primary school in Lomnice nad Popelkou, which successfully completed. Thereafter, to the satisfaction of the grandparents joined in June 1891 the Cadet school of infantry in Prague. Here soon got so accustomed to them a hard drill and discipline of the military regime, which impressing. He liked especially the swordplay, history, and social sciences. He was rated as the best of the entire year. As such, he also had the honor to report the onset of cadets to the austrian emperor Francis Joseph I. during his visit to the school. Then, with him also spoke. Ended the cadet 18.7.1895 as the valedictorian, and he joined as a cadet at the Trainregiment Nr. 2 in Budapest.

For their excellent results of the school was exceptionally promoted to lieutenant 1. 11. 1895 and transferred to the Trainbatalion Nr. 14 in Innsbruck. At that time a hot-blooded Šnejdárek during their vacation in the summer of 1896 secretly across to the Balkans, where then in the ranks of the Turkish army participated in defensive battles Prevezzy against the Greeks. For this service in a foreign army was in October 1896 by the ministry of war prematurely retired, "at his own request".

Thanks to finances after her mother was secure and decided to venture into the world in search of adventure. Throughout north Africa, ports in the Red sea and the coast of Guinea. Here subsequently decided to volunteer to join the French Foreign legion. Had no desire to ask the austrian embassy for confirmation of his officer's patent, which could be the French foreign legion maybe accepted as an officer. Entered instead of immediately 24. 1. 1899 the belgian border in Longueville as a private. Entered service in the fort Saint-Jean, then to the service in Oran, in the fortress of Sainte-Therése. For your excellent prerequisites was intended to an elite unit of riflemen. In may 1900 for the first time participated in the ranks of the Foreign legion fighting in the Sahara, where he was wounded. It was one of his total of thirty injuries suffered in the ranks of the Foreign legion in the subsequent 17 campaigns. In 1902 he was promoted to lance corporal and awarded, then promoted soon to corporal and sergeant. In 1904 he finished his five-year commitment, however, he chose to stay in the legion, now at 4. company 2e Régiment Légion étrangére. Now has already earned for his service in the legion of French citizenship. Further, he was promoting and after graduating from officers ' short course in Saint-Maixent in the year 1906 promoted to lieutenant of the French army, as one of the best graduates of the course. He left to serve in Algiers to fight against the renegade indian tribes. In 1909 he was promoted for merit to second lieutenant. After serving in Tunis in 4e R. d. T. alg. Day 4. 6. 1912 here he married Cathérine Constantien. Soon after the marriage, however, had to participate in a military expedition to the west of Morocco, where he served in command positions. After fulfilling the mission he served in Morocco again, and then in Tunis (Kairuan), where he was from November 1913 as the mobilization officer of the regiment. For the fight in Morocco, he was awarded the Commemorative moroccan medals and the tunisian Nišan el Iftikchar 4. instance.

In the summer of 1914 broke out. world war. Lieutenant Šnejdárek for the replacement of the battalion was devoted to leadership training of recruits. Soon, however, volunteered for the front. As deputy commander of one of the rot 1. the moroccan division (in the framework of which fought and Czech Rota Hi) participated in the battles of the Marne and Aisně. After the death of the company commander took command of the 20. 9. 1914. The subsequent day he was wounded, but remained at the head of his troops, and repelled the enemy. He was awarded the French La Croix de la Guerre and the knight's cross LOrdre de la Légion dhonneur. After the cure in February 1915 he returned to his regiment as commander of the 4. the company, headed by participated in the fighting at Arras. Here before the battle is 8.5.1915 evening met with Czech volunteers Company Hello, to which his unit adjoined...

Many times Šnějdárek, now already promoted to the rank of captain (from 5. 5. 1915) stood in the face of death... Always, however, eventually escaped, whether in the fighting in the desert against indigenous tribes, where he fought for the glory of France or on a european battlefield as well. world war. To his meeting with Czech volunteers Company Hello in the eve of the bloody battle of Arras (there was a 9.5.1915) later said:

"... I was feeling weird around the heart, to meet with compatriots, on the eve of death for many of them, far from their homeland. Only later I realized how the trench had trench Czech. The face and expression of the eyes seemed to me so familiar... the Next day in the same hour, half of them lay dead there first. Fell in the attack on the terrible Ouvrages blanches.“

During the subsequent fighting at Arras, he was wounded and Šnejdárek. It was 16. 6. 1915. For several months he was treated and then was sent back to north Africa. Here he attended a gas course at Constantine in Algeria, where he went to a replacement battalion in Tunisia, where it is once again devoted to the training of recruits. During the fighting at Arras was decorated for bravery repeatedly to the French La Croix de la Guerre. Again asked for the opportunity to go to the front. With one marching platoon saharan natives – volunteers returned in August, 1917 back to the front. 31. 10. 1917 was on the Chemin-des-Dames once again got hurt in the fight at the head of his unit. By the end of November, however, was once again cured.

After the end of the Even. world war participated in the organisation of the departure of the czechoslovak.troops from France to already of free Czechoslovakia, his old homeland. He was appointed temporary commander of the 22. čs. rifle regiment, while he managed to many delays speed up thanks to its vigor and self-confidence. After returning to his homeland he was as a French citizen submitted to the czechoslovak rank of colonel and was appointed military inspector in Moravská Ostrava. At the time of the short-czechoslovak-Polish war in early 1919 on the tešín region of his inspectorate turned into the Headquarters of the operating troops in the Těšín region. Although it was against the wishes of France certainly lieutenant colonel Šnejdárek led operations against the Polish army in the interest of the Republic of Czechoslovakia - always remained British. From France he could face a court-martial (Poland was also an ally of France as Czechoslovakia). He was the only French officer willing to risk his entire career in the French army for the interests of Czechoslovakia. It is only through his decisive action and command managed to get for čs. side then victory. Is then 23. 2. 1919 promoted to the czechoslovak rank of colonel and appointed čs. delegate at the inter-allied commission for the tešín region in Warsaw. He was then appointed commander of the II. infantry division (4. 6. 1919) and awarded again the French La Croix de la Guerre au Théatre dˇoperations extérieure (7.6.1919), then for his merits for the Czechoslovakia again and the Czechoslovak war cross (7. 7. 1919). 13. 7. 1919 again awarded the French La Croix de la Guerre au Théatre dˇoperations extérieure.

It has already lost the fight in southern Slovakia against the aggression of Hungary, where in the fight with overwhelming force čs. the units in section II. division hard to resist in hard fighting. Šnejdárek took command of operations in part II. infantry division and according to old-timers with its onset like a hurricane. He himself later recalled:

"... I took the quick fix all the military, what could be and turned out in fields and forests, valleys and mountains, and I gave immediately the order to attack. Demoralized batch I got demoted. Says I to the cowards shot!...“

He lifted the spirit in the whole division, and from the defense created offensive division, which swept through the Hungarian sections of the surprising strong and decisive attacks. 13. 6. 1919 freed Bánskou Štiavnica and chased the Hungarians up to the Levic. Very decisively participated in the final czechoslovak victory in the war against Hungary by ensuring čs. territory. He was appointed subsequently, the military commander of Prague as the "savior of Slovakia".

Passed important functions in the ms. the army, meanwhile, awarded the other high orders our and allies. In čs. army soldiers loved, superiors or some policy is often criticized. 19. 11. 1920 general In. rank class. The commander of the Infantry divisions 9, 7 and then 11. On 10. 2. 1925 promoted,15. 9. 1925 the Provincial military commander of Kosice. Subsequently 23. 6. 1926 acquired czechoslovak citizenship, to which he gave the preference to the French. For your self-confidence and vigor he had frequent disagreements with the command of the czechoslovak.army. 16. 12. 1927 divisional general. 31. 12. 1932 to provincial commander of Bratislava. Finally - 13. 11. 1930 promoted to the highest military rank of čs. army - general of the army. 1. 7. 1935 pensionován. 1. 6. 1939 leaves crushed Munich back to France. In march 1940 included temporarily in Ms.the army in France for their connections and experience. 5.11.1940 goes back to rest to north Africa. 13. 5. 1945 died army general Josef Šnejdárek after the operation in the Casablanca... 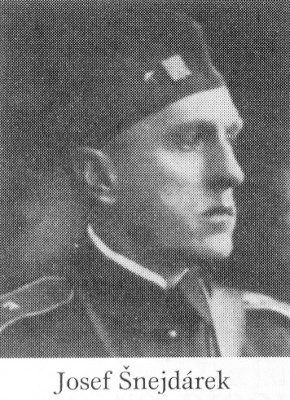 URL : https://www.valka.cz/Snejdarek-Josef-t14674#253531Version : 0
stary MOD 13 years ago
Buried he was in Casablanca, but in the 90's. years later, his remains were exhumed and transported to his native Napajedla, where they were at the local cemetery buried again with all the vojenskýmy honors.. 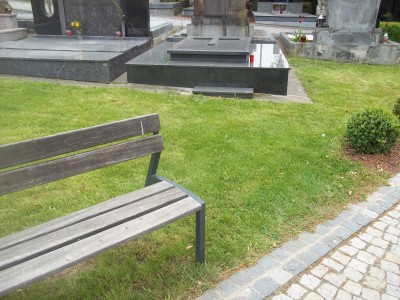 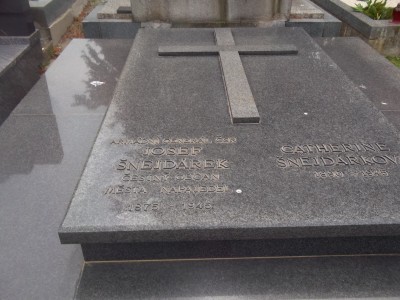