The vehicle was developed in the early nineties by the efforts of VTÚ 70 Brno and VOP 025 Nový Jičín in response to the experience with the deployment of vehicles ARS-12M in Operation Desert Shield/Desert Storm in the Gulf of Peska in 1990 and 1991. The project was presented to the army at early 1992. The prototype vehicle was involved in company and inspection tests in April 1993.

The decontamination car APZ-94 intended for use in the civil sector in the liquidation of ecological accidents was derived from the ACHR-90 vehicle. One APZ-94P was made for the Fire and Rescue Service of the Capital City of Prague.

ACHR-90M
A modernized vehicle, the main distinguishing feature of which is the use of the chassis from the T815-2 ARMAX series. In the armament of the ACR since the end of the nineties replaces prehistoric vehicles ARS-12M. The first ACHR-90M was delivered to the Czech Army in 1997, by the end of 2008 a total of 33 of these vehicles had been introduced.

The vehicles were deployed to Operation Enduring Freedom, in Kuwait and Iraq, 2002-2003), where she had to perform decontamination tasks in case the Iraqi army used weapons of mass destruction. After the occupation of Iraq by coalition troops, it finally supplied drinking water to the population of the Iraqi city of Basra.

In the NATO Rapid Reaction Force, members of the 31. Brigade of Radiation, Chemical and Biological Protection in 2004 participated for two months in securing XXXVIII. Summer Olympics and XII. Paralympic Games in Greek Athens. Six ACHR-90M decontamination vehicles were used in the event. In case of danger, Czech specialists had to work on sports grounds, resp. anywhere in space Athens and help the Greek rescue services.

ACHR-90M also operated in 2007-2009 as part of the ISAF mission at Kabul International Airport in Afghanistan (ACR contingents of field hospitals and chemical units/ACR contingents of ISAF KAIA and chemical units), where the chemical units of individual contingents performed tasks related to chemical security in for the benefit of ISAF Headquarters in Kabul (assessment of the radiation, chemical and biological situation in the area of responsibility, identification of toxic and radioactive substances, sampling and analysis). ACHR-90M were also used in Afghanistan to supply the ACR workplaces and accommodation at Kabul Airport with utility water. The vehicles were also used to wash the military equipment of Czech contingents and airport roads.

Decontamination vehicle ACHR-90M on chassis Tatra 815 VP33 6x6 is designed for:
- decontamination of combat, transport and special equipment, buildings, roads, terrain and people
- preparation, transport and temporary storage of decontamination mixtures and solutions and their application by hand jets with spray, high-pressure and foaming nozzles and jets with flow brushes
- water heating and steam generation, which is used mainly for decontamination of heavily greasy engine compartments
- decontamination of persons in protective clothing or their hygienic cleaning by showering with warm water or a washing mixture
- washing and decontamination of roads, airfields and terrain with paved surfaces by jets of water or washing mixture while driving in front of the car
- pumping and transport of aggressive liquids
- extinguishing fires by conventional extinguishing techniques or high-pressure jets with a pressure of up to 9 MPa
- supply of troops or emergency response units with water, mixtures, steam and electricity
- rescue and towing of damaged equipment

Decontamination of buildings, structures and large-scale technology is ensured by means of a handling platform with a reach of up to 15 m, which can be connected behind the car.

From the military chemical car ACHR-90M was derived civilian decontamination car APZ-94A, which differs from the military version by extended fire and rescue equipment. Two APZ-94A with right-hand drive were delivered to South Africa.
URL CZ: https://www.valka.cz/CZE-ACHR-90M-dekontaminacni-vozidlo-t15787#58664Verze : 9
URL EN: https://www.armedconflicts.com/CZE-ACHR-90M-dekontaminacni-vozidlo-t15787#58664Version : 0
Martin Smíšek MOD 16 years ago
A convoy of ACHR-90 and ACHR-90M vehicles from the 1st Czech-Slovak Battalion of Radiation, Chemical and Biological Protection deployed in 2003 to Operation Enduring Freedom, during which he operated from Camp Doha in Kuwait. 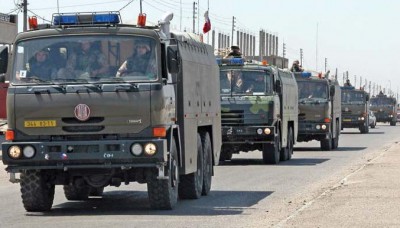 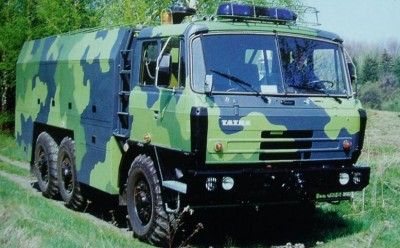 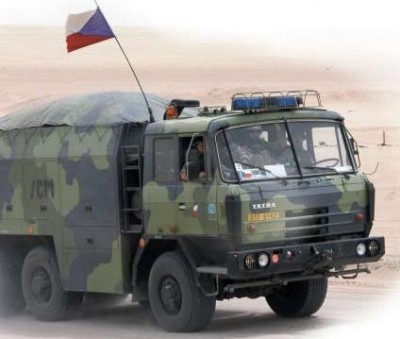 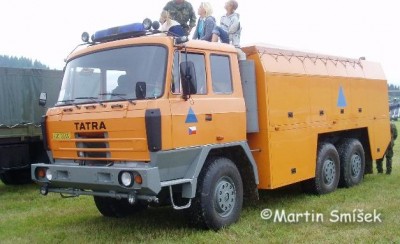 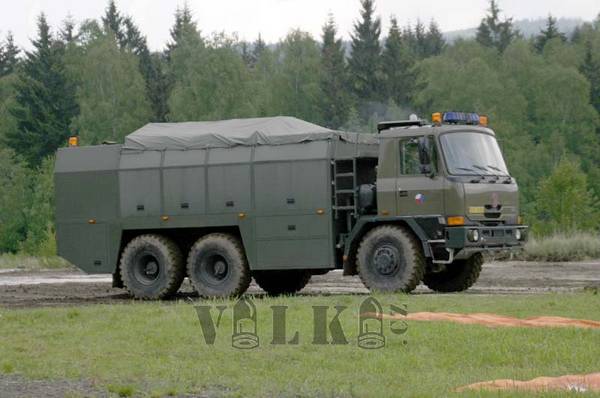 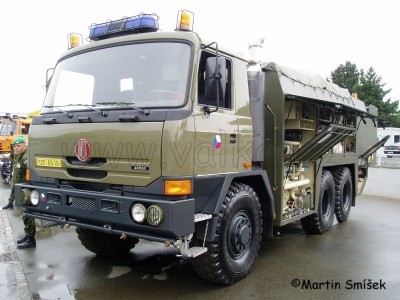 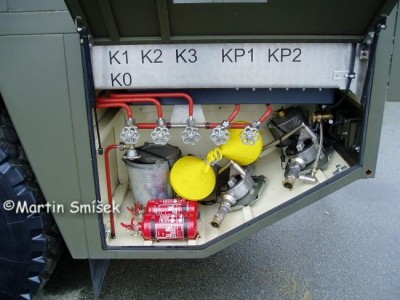 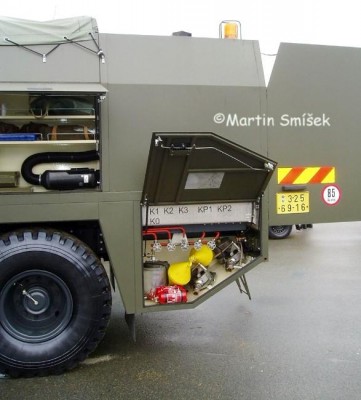 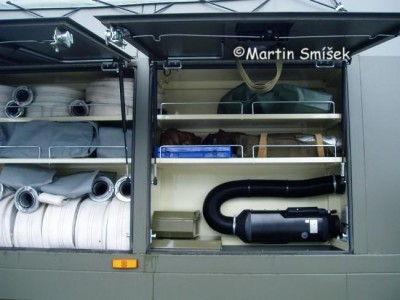 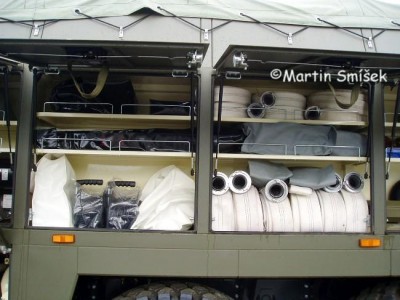 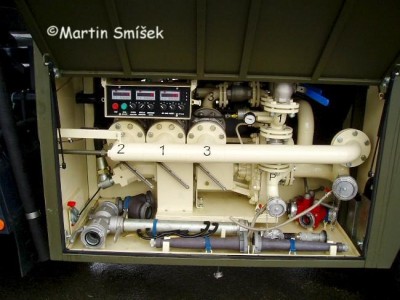 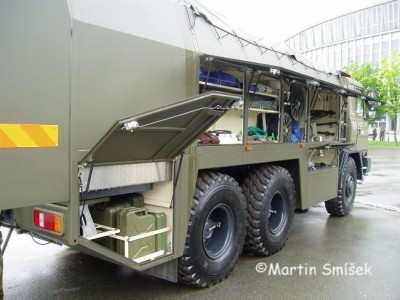 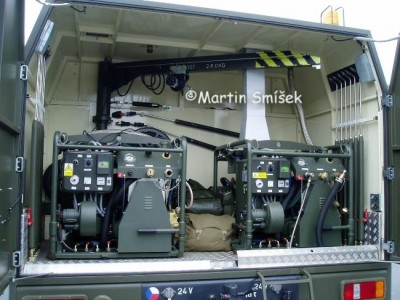 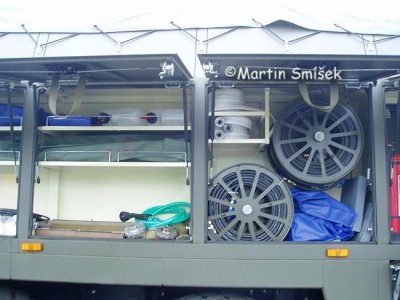 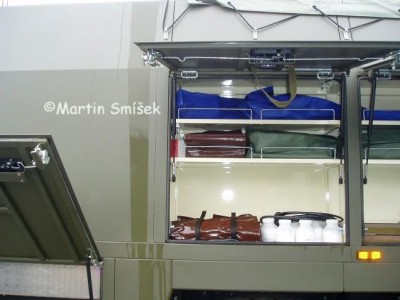 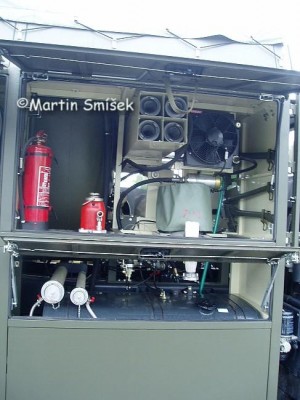 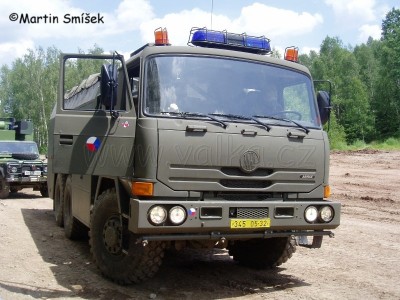 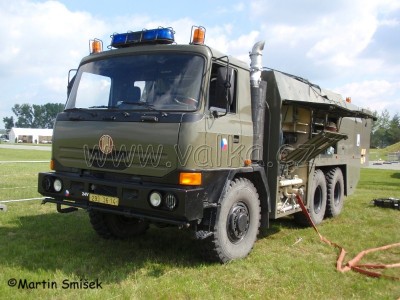 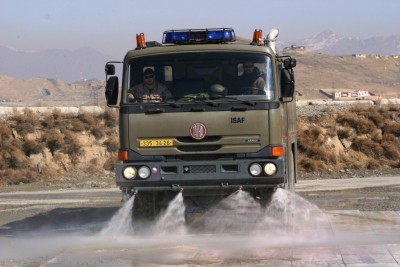 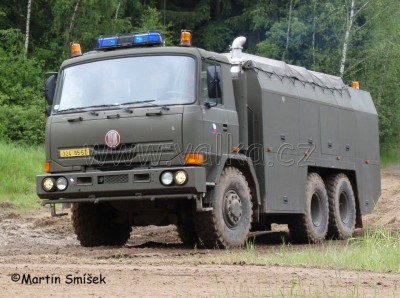 URL CZ: https://www.valka.cz/CZE-ACHR-90M-dekontaminacni-vozidlo-t15787#363963Verze : 0
URL EN: https://www.armedconflicts.com/CZE-ACHR-90M-dekontaminacni-vozidlo-t15787#363963Version : 0
Martin Smíšek MOD 10 years ago
ACHR-90M CO (VPZ 023 50-13, year of production 2009), 3rd Company of Chemical Protection, 312. battalion of radiation, chemical and biological protection, IDET 2011, May 2011. The specimen shown belongs to the last manufactured vehicles of the ACHR-90M series. Type ACHR-90M CO was destined to perform civil protection tasks in the set of rescue battalions. At the time when 023 50-13 was being produced, however, all these units had been abolished and separate rescue companies already had the appropriate equipment. The vehicle finally traveled to the ranks of 31. radiation, chemical and biological protection brigade in Liberec. The fact that this is a version of the ACHR-90M CO is evident, among other things, from the fact that in the rear of the vehicle is transported only one unit C 921 SANIJET. 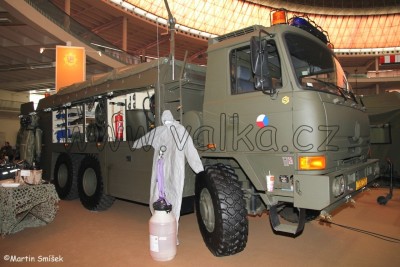 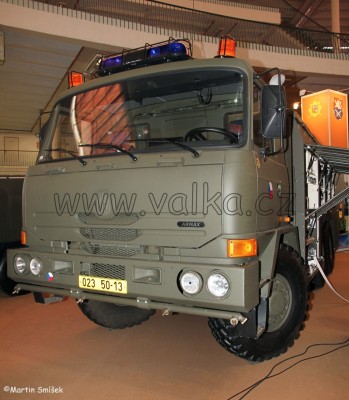 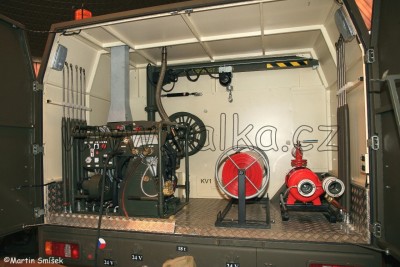 URL CZ: https://www.valka.cz/CZE-ACHR-90M-dekontaminacni-vozidlo-t15787#420917Verze : 1
URL EN: https://www.armedconflicts.com/CZE-ACHR-90M-dekontaminacni-vozidlo-t15787#420917Version : 0
Martin Smíšek MOD 9 years ago
ACHR-90M at the airport in Kabul on the way to the prepared transport aircraft An-124 Ruslan, which will transport him back to the Czech Republic, December 2013. The decontamination vehicle ACHR-90M was deployed in Afghanistan from April 2007 to December 2008 in the composition of the 1st, 2nd, 3rd, 4th and 5th units of the field hospital and chemical unit. From December 2008 to June 2010, within the 1st, 2nd and 3rd contingent of the ACR Kabul International Airport and chemical units at the airport in Kabul. It then operated in the 9th, 10th, 11th, 12th, 13th, 14th and 15th Chemical and Biological Protection Units in the ISAF force, also deployed at Kabul Airport. 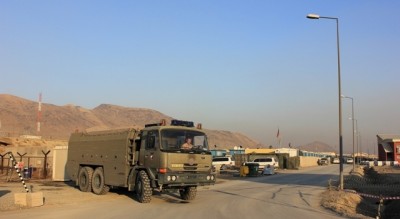 URL CZ: https://www.valka.cz/CZE-ACHR-90M-dekontaminacni-vozidlo-t15787#502588Verze : 1
URL EN: https://www.armedconflicts.com/CZE-ACHR-90M-dekontaminacni-vozidlo-t15787#502588Version : 0
Martin Smíšek MOD 7 years ago
Cars ACHR-90M together with cars T810-V, T-815-2 Multilift MK.IV, water ÚV-2000, system Line-82 and a developed kit for decontamination of weapons 31. Regiment of Radiation, Chemical and Biological Protection at the Spanish polygon San Gregorio, exercise Trident Juncture 2015, October 24, 2015. The main part of the alliance exercise Trident Juncture 2015 was attended by forty members 31. Regiment of Radiation, Chemical and Biological Protection. They were in charge of decontamination of equipment and people of training partners. The Liberec decontamination platoon was assigned to an international anti-chemical company along with a Bulgarian and British chemical reconnaissance platoon and a sampling team. The company was commanded by Polish soldiers. The Trident Juncture 2015 exercise took place in 16 locations in Spain, Portugal and Italy and was one of the largest Alliance exercises. Air, ground, naval and special forces were involved in it. It was attended by a total of 36,000 troops from more than 30 NATO and Partner countries. The exercise took place in several phases from 3 October to 16 November 2015 and was part of the preparation of the Alliance's Rapid Reaction Force (NRF) and the Very Rapid Reaction Force (VJTF). For the ACR, this exercise was attended by designated members of the air ( 212th Tactical Squadron, 222nd Helicopter Squadron/LOSO) , ground ( 31st Regiment of Radiation, Chemical and Biological Protection) and special forces ( 601st Special Forces Group ). In total, there were more than 250 soldiers. 4 helicopters were deployed from aircraft Mi-171Š SOF II ( 9774, 9799, 9806, 9813) a 6 letounů L-159A ALCA ( 6052, 6057 , 6058, 6062, 6064, 6066), which operated from a base in Spanish Zaragoza. 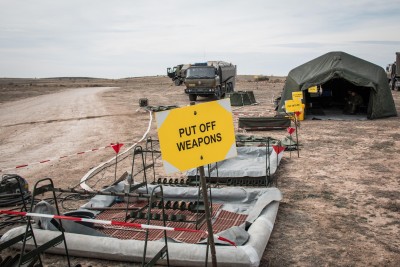 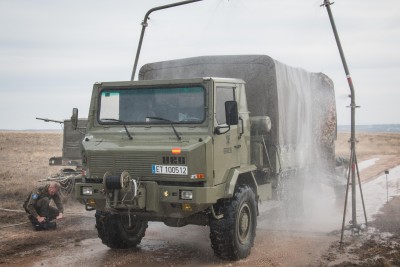 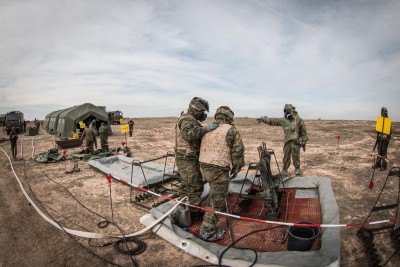 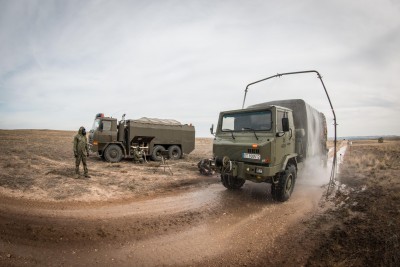 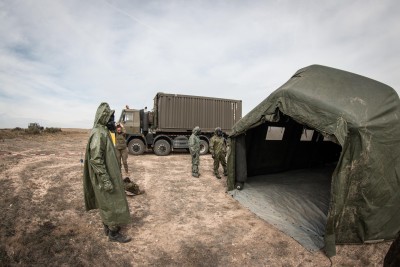