The history of the 2nd Fighter Air Regiment ( 2nd IAP) officially begins to be written on December 21, 1937, when the directive of the People's Defense Commissioner of the USSR No. 4/1/49862ss ( № 4/1/49862сс) in conjunction with the Military Council Directive of the Kiev Military District of 14.04.1938 No. ŠM/3/0031ss ( № ШМ/3/0031сс) was in the city of Vasilkov ( Kiev Military District) from 13.05.1938 created the 2nd IAP. The regiment was formed from the original 1st and 2nd Section of the 109th Fighter Squadron ( 109 истребительная авиаэскадрилья) belonging to the 51st Fighter Air Brigade ([iaааааааьья aaaaaa]). At the same time, the newly formed regiment was supplemented by personnel from the 5th Fighter Squadron ( 5 истребительная авиаэскадрилья).

Already a year and a half since its inception, the regiment is involved in a faithful invasion of Poland, or as euphemistically states the source below "until the liberation of Western Ukraine". While Wehrmacht troops are attacking Poland from the west, the troops of the Workers 'and Peasants' Red Army are marching from the east. As part of it, the 2nd IAP, whose pilots are fighting on machines, is involved in the fighting in the ranks of the 22nd Fighter Air Brigade of the Ukrainian Front.=/topic/view/15692] I-16[/url] a I-15bis.

After a short break, the 4th Squadron under the command of Captain Sobolev was assigned in January 1940 to Northwest Front to fight against Finland.

The pilots of the 2nd IAP on the machines I-16 and I-153 in the composition of the 22nd Fighter Air Brigade Southern Front. Two months later, in September 1940, the regiment was included in the lineup 36. IAD, Kiev Air Force Special Military District. In this lineup, the regiment also catches the attack on the Soviet Union June 22, 1941. At the time of entering the fighting, the regiment had 57 aircraft of the type I-16 and I-153, of which 11 irreparable. The regiment recorded its first air victory in the battle chronicle on the first day of the war - a group of fighters were in air combat around the city Kiev shot down two German bombers identified as Ju-88. After three months of fierce fighting, the regiment was 20.09.1941 taken to the reserve of the Air Force Southwest Front.

From 23.11.1941 to 10.05.1942 the regiment was included under 2. Reserve Fighter Air Regiment Moscow Military District with deployment to the station Sejma, Gorky region. In this reserve regiment, the regiment was rearmed and pilots retrained for LaGG-3 aircraft. On aircraft of this type from 10.05.1942 participated in the fighting in the Air Force Southwest Front, while from 29.05.1942 is included in the group 220. IAD 8. Air Force Southwest Front.

On October 7, 1942, the regiment passes to 8.Reserve Fighter Air Regiment Volga Military District, while it is located at the airport near the village of Bagaj-Baranovka Saratov region. There, the regiment receives new aircraft type Jak-1. After a short break, the regiment is 22.10.1942 thrown into battle Stalingrad Front in the ranks of 226. mixed aviation division. During the ongoing heavy fighting of the Battle of Stalingrad, the regiment is first transferred to the group on 11.12.1942 287. IAD and then on 01.01.1943 268. IAD.

For exemplary fulfillment of combat tasks and at the same time manifested heroism was 2. IAP By Decree of the People's Commissariat of Defense of the USSR № 128 of 18.03.1943 transformed into 85. Guards Fighter Air Regiment. 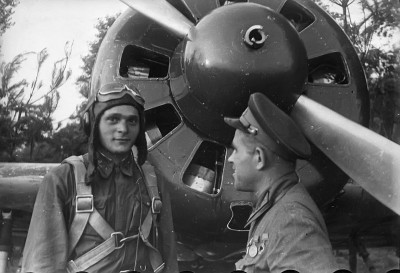