URL : https://www.valka.cz/Shrapnel-Henry-t176130#519659Version : 0
RoBoT MOD 7 years ago
Henry Shrapnel was born at the manor Midway in wiltshirském town of Bradford on Avon as the ninth child in a family of Zachariah Shrapnela and his wife Lydia. Lieutenant Shrapnel served in the british army and in the artillery. At their own expense dealt with the development of new ammunition and in 1784 came up with an invention, which he called as the ammunition is spherical case. It was a hollow cannonball that was filled with lead shot and in the air above the ground exploded. An explosive mixture of scattered lead pellets should act against live enemy force and do it more efficiently than the cannon balls. The cloak missiles served only as a wrapper, with its fragmentation and the combat effect does not count. Similar ammunition was used previously. Already in 1453 appeared ammunition consisting of a metal container, which was filled with a mixture of metal fragments. During the 18. century is also widely used the brush ammunition, which was the volume of the metal pellets stored in a canvas container. Shrapnel then connected the metal packaging and metal components and added the explosive, which exploded from the impact.

In 1787 occurred in Gibraltar to a successful demonstration and began the process leading to the introduction into the armament. Shrapnel, meanwhile, served in Flanders during the revolutionary wars in 1793 he was wounded. In 1795 he was appointed captain, and in November 1803 he was promoted to major. And just in the year 1803 was extended variant of the shrapnel of the projectile introduced into the equipment. Ammunition bore the name of its inventor and the term moreover, persisted even after the replacement of the shrapnel bullets tříštivými, respectively tříštivě-jerky, which operate on a somewhat different principle (fragmentation shell).

After the successful deployment of the ammunition in the battle for the New Amsterdam in April of 1804 he had Shrapnel exceptionally, after a few months again promoted, this time to lieutenant colonel. In 1814 the british government appreciated the Shrapnelův benefit the granting of an annual annuity, which converted to today's value of and transfer to the crown amounted to about 200 000 a month. In 1827 he was in the artillery, appointed to the position of Colonel-Commandant and in 1837 promoted to the rank of lieutenant general. From 1835 until his death he lived landed at southampton Peartree Green. 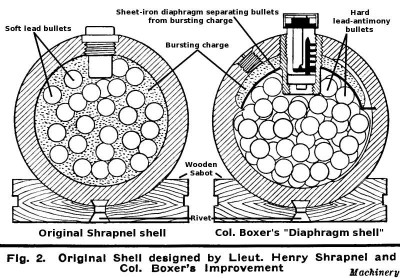