Son nezámožného peasant from Litohradů in Rychnov nad Kněžnou. Was the seventh child of a total of eleven descendants of John Vašátka (*19.9.1834) and his second wife Christina (*15.8.1848). After the father's death (1885) lives Karel from mother to výminku and management of the family farm went to his older brother John. General he attended school in Solnice and one year in Heaven Rybné. On the basis of their academic performance he received a scholarship, based one of his ancestors, which allowed him to study at the gymnasia in Rychnov n. K. After successfully graduating from high school he decided to study history and geography at the philosophical faculty of the Prague university. Subsequently, it is called upon to exercise the prescribed full-time service, which as a so-called"one-year volunteer" has done at 18.infantry regiment in Olomouc and ended with her in the rank of cadet, trainee officer rank. After fruitless attempts to obtain a place of a high school teacher and his mother's death (1910) has decided to exit Russia (9.3.1911). In Russia lives with his uncle, also Charles Vašátka, in Viliji in the Nodes governorate, who manages the estate and the distillery. Here was preparing for the certifying examinations, which would entitle to teach at Russian schools. After the successful completion of these tests and year's work on the farm of an uncle obtained a position of professor at the school in Tiflis. Soon, however, decides to leave his friend Věcovskému and himself returned to work on the farm of his uncle.

In the time of the outbreak of the war is still in Russia and therefore soon after the establishment of the Czech entourage decided to enter into its ranks. Already 21.8.1914 was entered in the 2.company of the Czech retinue. Despite the fact that during his service in the Austro-Hungarian army, attained the rank of cadet fails to apply his claim to the officers ' insignia, that in the Russian environment service significantly eased and the ranks of the Czech retinue entered as a gunner (rank equating to private). Karel took part in the solemn oath of the Czech entourage in Kiev on the square of Bohdan Khmelnytsky in front of the temple of st. Sofia held 28.9.1914. Shortly after this oath taken ill and therefore is to the front to your unit sent to 14.11.1914. The Czech guards were at the front moved already at the end of October. Along with the 2.the company is involved in a number of intelligence agencies in Galicia. Soon he was promoted to the rank of jefrejtora (lance corporal) and he was given command of a platoon. For this intelligence was 25.2.1915 I the Cross of st. George 4.degree. Subsequently, just like a scout greatly distinguished himself in the rozvědkách in the Carpathians in the Slovak Zborov. Here he has worked on transferring the greater part of the austro-Hungarian regiment no. 28, "Prague" in Russian captivity (3.4.1915). It was about three battalions and part of support units. For this activity received the Cross of st. George 3.degree (9.6.1915). Just To.Vašátko is the main contribution responsible for bringing their půlroty of the austro-Hungarian encirclement after the breakthrough at gorlice serves.

On 4.5.1915. is assigned to the staff of the Russian 24.army corps, Charles distinguished himself. At night 29.6.1915 his intelligence seized 32 austrian soldiers and gained valuable information. On 25.8.1915 is awarded the the Cross of st. George 2.degree and in June is for valor awarded also the medal of st. George 4.instance. 19.12.1915 is promoted to the rank of sergeant and transferred back to "their" 2.company of the Czech retinue. Here, under the command of prap.Josef Svec participates in other rozvědkách on the river Ikvě (January 1916). In February 1916 the Czech retinue reorganized into the Czechoslovak rifle regiment in which Charles Vašátko acts as an instructor for the training of recruits in the curriculum section of the regiment (from 11.2. to 9.4.1916). 2.5.1916 is transferred to the 5.platoon of the regiment and 8.6.1916 promoted to paporščika. In June became commander of the so-called Czech commandoes (the interpretation section) in a pow camp in Dárnici near Kiev. This unit consisted of about 30 ms. volunteers for the Russian film crew were conducting an intelligence service in the ranks of the prisoners and at the same time participated in the raising of volunteers for the czechoslovak. unit. This position he held during the period brusilovské ofensivy, when this camp a day through thousands of prisoners. Here also he met his brother Václav, who is assisted from the accomplishment of entry into the czechoslovak. troops.

5.11.1916 is temporarily assigned to the staff that is forming Čs.rifle brigade and 15.12.1916 is at his own request, transferred back to "their" 2.company 1.čs. rifle regiment. On 15.5.1917 is appointed commander of this company. With this unit he took part in the famous battle of Zborov, where 2.7. leads the attack of the 60 grenadiers, forming the first wave of attack. Between the 2. and 3. enemy trenches was badly wounded, shrapnel grenade into the crown of the head. In this battle, was among other members of our unit's wounded and his brother Václav. In the battle of Zborov received three other honors, among which was also Soldatský st George's cross, which was awarded to the officers from the decision of the soldiers.

Injuries To The.Vašátka was provisionally treated in a Russian field hospital in Tarnopoli and subsequently treated in a Kiev hospital. Even then, however, accompanied by great pain and actually stayed still in danger even to life. Just when staying in Kiev procured for his 2.a platoon attack, this at its parting from the unit members 2.company 1.čs. rifle regiment forward. After that, he went to his uncle, who had to leave their property and now worked as the administrator of one estate in the vicinity of Kiev. In October 1917 he is promoted to ensign.

Even if his injury never really recovered and constantly suffered great pain and his head was neatly in a bandage (he was missing part of the skull) decided in February 1918 to move to France along with our Legions. His injuries prevent in assignment to combat units and so it is from 18.4.1918 converted as "děžurný general" to the staff corps. This function is mainly taking care of personal things of our soldiers, this function could be characterized as a function of the chief of the personal(personnel) department. On the occasion of the anniversary of the Zborovská battle (2.7.1918) was promoted to the rank of captain and later to major and in August 1918 to the rank of lieutenant colonel. The end of the year because of their constant headaches decided for surgery. Treparace of the skull was performed 6.1.1919 in a hospital in Chelyabinsk, unfortunately the following day there were complications and the colonel.Karel Vašátko dying 9.1.1919 to the inflammation of the meninges. Buried was 12.1.1919 on the chelyabinsk cemetery next to his friend col. Joseph Svec. In memory of To.Vašátka is "its" 2.company 1.ctr. the regiment named "Vašátkova".

On the occasion of the 5.anniversary of the battle of Zborov in Lipovce unveiled a commemorative plaque. In 1933, his remains were exhumed and, together with the remains of his colonel. J. Svec transported to Prague and on 1.10.1933 solemnly with pieta stored in the Liberation Monument on prague's Vítkov hill. The following year (1934) there was a naming of the Government of the county legionnaires on the "County of colonel.Karl Vašátka". The city of Rychnov n. K. honor his memory by renaming one of its main streets on the "ul.To.Vašátka". On 28.7.1935 was in Solnice on the house, where To.Vašátko lived memorial plaque.

Hatred of the nazis towards everything Czech during the II.world war ii turned against the remains To. Vašátka , which, together with the remains of col. J. Svec and the other brothers of the legionaries were in the Liberation Monument destroyed.

In conclusion, I would like to thank Paul J.Kuthanovi for the additions and clarifications of my previous attempt to write a biography of colonel.Karl Vašátka.

Literature :
The army and the nation, proceedings issued to 20. Anniversary of the Republic of Czechoslovakia, Prague 1938
The military history institute
Čs. legionaries of the district Rychnov n. Kn..
URL : https://www.valka.cz/Vasatko-Karel-t19632#73465Version : 0
Dav 17 years ago

URL : https://www.valka.cz/Vasatko-Karel-t19632#115164Version : 0
Dav 16 years ago
I would insert a picture of this hero. For clarification was called (in Russia) a full knight of the order of St. john.George. Received a really all of the grades the cross of St. George. Furthermore, at the time of the Provisional government of 1917 was decorated with another cross of St. george. George, but he already did not indicate the degree, for the change to the band is vavřínová twig. Furthermore, the received and the Order of the Sv.George IV. instance. Was the bearer of a medal For valour. It is good to know that this ms. officer, is recorded also on the various Russian military site as an example of a brave soldier and a knight of the order of St. john. George.

It is worth noting, spusob wearing medals For valor. It is clear to see that the medal is nošena so that the portrait of the tsar was hidden (according to the regulation of the Provisional government).


Soldatský cross? A classic of the order of St.. George, who could be granted the officer on the proposal of all the soldiers of his unit. The classic award is the first prošetřovalo of the special commission, which only decided on the issue. Here after 1917, as a manifestation of democracy Prazatímní government of 1917 it was possible, but only for the last of the fourth grade to grant the order directly on a proposal from the soldiers.. 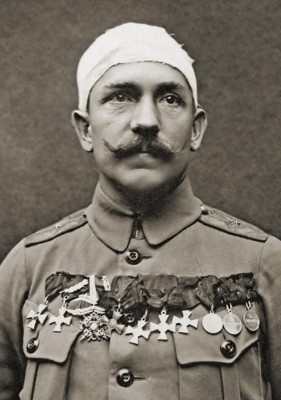 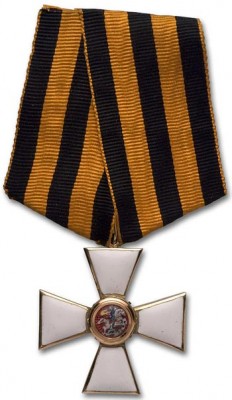 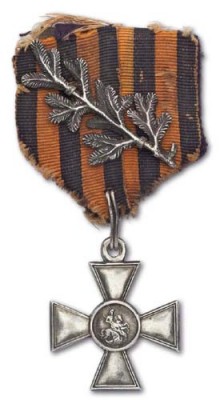 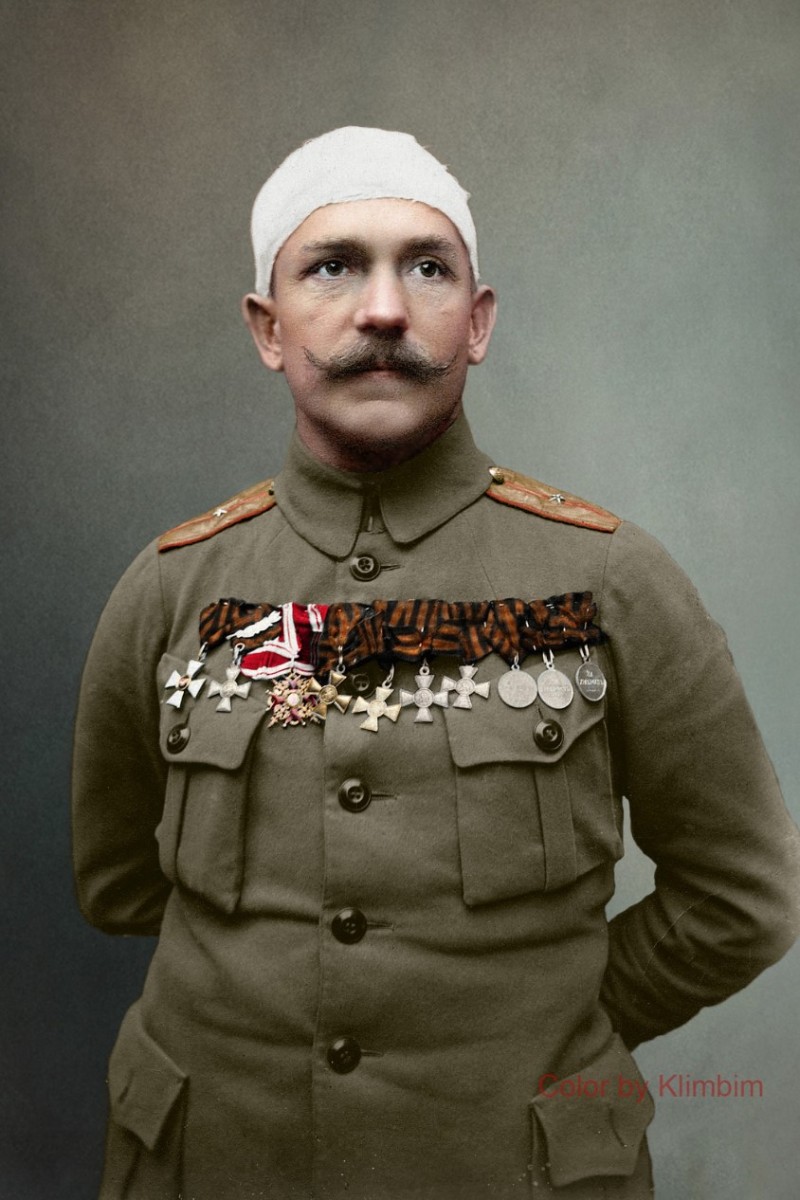