Tank tower T-40/75 N on a reinforced concrete base

In 1954, the idea arose to use the towers of the captured German medium tanks Pz.Kpfw.IV as permanent fortifications in the border zones of the Czechoslovak Republic. The tank cannon itself was still evaluated as effective in this period and the army had a sufficient supply of ammunition for the cannons.
At the end of 12/1954, on the recommendation of a Soviet adviser, the construction of the test facility was approved by the Chief of the General Staff, Colonel-General Václav Kratochvíl. Three tank towers could be used for the tests. The Engineer Army Headquarters developed a project and for experimental purposes was ordered to the tank-mechanized army headquarters to send one tank T-40/75 N (Pz.Kpfw.IV) to Strašíc, where it was to be available from 15.3.1950 to 8.5.1955 to the Command of the Engineer Army. The beginning of the project at VŽV was dated from 4.2.1955.
An experimental reinforced concrete bunker was created on the VVP Jince-Padrť anti-tank shooting range, on the ceiling of which the tower was installed together with a part of the hull. A cell for fired cartridges with a closable flap was created under the crew compartment. The cell was equipped with a drainage hole and was ventilated by a small chimney. The total length of the building was 6090 mm, the maximum width of the building was 3920 mm. The wall thickness in the front part was 1000 mm, the sides 600 mm, the rear part and 250 mm. In the front, such an object could withstand shooting from 57 mm and 85 mm anti-tank cannons and shooting from 122 mm howitzer. The concrete ceiling was to withstand firing from 82 mm mortar. The surroundings of the reinforced concrete building could be reinforced with earthenware and soil, which would strengthen the protection of the building, but at the same time would disrupt a fully circular shot. The crew space was supplied with fresh air by a fan taken from the light fortification vz.37. The chamber for waste of empty cartridges had dimensions of 800x100x850 mm. The hull of the tank was fastened with 10 screws with a diameter of 30 mm embedded in concrete. When using the turret from Pz.Kpfw.IV Ausf.J, the elevation of the cannon was in the range of -10 ° to + 20 °. The tower was driven manually, the tower fan was battery powered. Work on the construction of the building took place from March 21, 1955 to April 30, 1955.
After the completion of the work, the building was subjected to detailed tests, which measured the concentration of hazardous gases generated during firing, and finally, shelling tests were performed. At the same time, the time needed to assemble and disassemble the tower was to be ascertained, and a way of covering the opening was to be found, but this was not completed. The shootings were carried out 85 mm cannon vz.52 using anti-armor and fragmentation ammunition. The tests took place from 2.5.1955 to 4.5.1955, at the end of which the object was shot.
On May 3, 1955, the building was masked and the concentration of fumes generated during the shooting was measured. There were four series of 12 shots, each series with a different venting procedure. The best results were obtained when using a tower fan in a fully enclosed building. Corporal Voříšek from the heavy tank self-propelled regiment from Strašíc fired.
On May 4, 1955, a demonstration of the disassembly of the tower was performed, which lasted 95 minutes and the subsequent assembly of the tower in 75 minutes. Disassembly and assembly was provided by a standard mobile crane K-32 on a chassis Tatra 111, whose performance was at the limit of usability, therefore it was planned to use a stronger crane. followed by shooting tests performed by halves from the 203rd Anti-Tank Artillery Regiment. The shooting was started from a distance of 1400 meters. Eight shots disabled the combat's combat readiness, then the shooting moved to a distance of 800 meters and used anti-tank grenades with a ballistic hood completely shot the tower. The shooting ended at 5.30 pm
There were slight reservations about the construction and equipment of the bunker itself, which were to be resolved by modifying the project. However, the strength of the tower was unsatisfactory, which was, of course, a serious and categorical shortcoming, which led to the cancellation of the entire project. However, it was stated that when using stronger towers, such an intention could have more chances of success. A few years later, a similar project was created KŽ-3, which used a tower from T-34/85 . 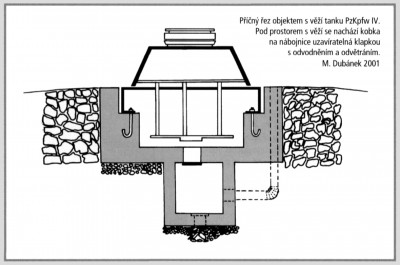