URL : https://www.valka.cz/MP-3008-Geraet-Neumuenster-t20073#405375Version : 0
karaco MOD 11 years ago
The fate of this weapon is more than just closely linked to the English submachine gun Sten. Soon after the start of its production, a number of specimens fell into the hands of the Germans. They were seized from supplies to the French resistance and later after the landing attempt at Dieppe. When the Walls fell into the hands of German army experts, they were literally shocked by his primitive appearance and their test results were clearly negative. Nevertheless, in 1943, at the request of the head of the security police and the SD, looted specimens were introduced into the arsenal of security forces in the occupied territories to anti-partisan units (Greece, France, East Prussia, the Balkans ...). The first batch consisted of 3010 pieces of these weapons.
Sten Mk. I was called MPi 748 (e) and Sten Mk II was called MPi 749 (e).
At the end of 1944, there was an acute need for simple small arms for the newly founded units of Volkswagen. Attention was also paid to this simple construction. As the weaknesses of the English Walls were known, some improvements and adjustments were made. The modifications were carried out by Mauser (designed by Vorgrimler).


Edits:
- simplification of the sleeve and change of the grip of the barrel sleeve, which they scored to the closure housing
- simplification of the magazine holder - made of one piece
- the hopper is oriented vertically (at the Wall horizontally)
- stack is from MP 40
- closure case - use of cheaper seam tube (for Wall seamless tube)
- the barrel is firmly pressed into the sleeve (fixed at the wall with a union nut - large clearance)
- fixed fly (at Stena there was a fly in a dovetail groove - large backlash-side shift)
- the trigger mechanism and the breech were kept original, except for the fuse, which formed one part with the breech (at Stena it formed a separate component)
- to a greater extent, spot machine welding (manual for Stena) and pressing of metal parts from sheet metal were used, which resulted in a reduction of the production time of the weapon to 60 minutes and consequently the final price of the weapon
The company Mauser produced about 160 pieces of weapons and they became technological samples for serial production, which was assigned to a number of small, mutually cooperating companies. This saved the capacity of large armories to produce more complex weapons.
The weapon was given weapon number 1-3-3008, but more often it is known under names such as Neuminster and the like. However, this designation applies to all versions. There were 4 versions of this weapon.


Version 1
- frame backrest
- standard features of this construction
- the locking lever of the lock, including the cut-out fulfilling the function of the fuse, is on the right
- the barrel sleeve is spot welded in the closure housing
- the barrel has 8 clockwise grooves (there are occasional specimens with 6 grooves)
- the most numerous version
- mostly these weapons are not marked, rarely you can find the names of manufacturers rne, tvw and nea ( Walther Steiner-Suhl). Because the designations have been preserved only after the designations ozz, rne and tvw cannot be reliably determined. Code rne may belong to company Elektropraga Rýnovice (i rnd ???). The company produced these weapons, but after the war, the weapons secured did not bear any designation.


Version 2
- wooden stock
- the sleeve of the barrel is pressed into the case of the closure
- the locking lever of the lock, including the cut-out fulfilling the function of the fuse, is on the left
- welds and processing are of good quality


Version # 3
- tubular shoulder rest without a hole in the armrest plate
- the barrel sleeve is spot welded in the closure housing
- the locking lever of the lock, including the cut-out fulfilling the function of the fuse, is on the right again
- welds and appearance is roughly processed


Version no.4
- a prototype of Blohm & Voss
- tubular support with a wooden handle in the front
- the tensioning lever is on the right - without a cutout allowing to secure the lock in the front position (fuse)
- the trigger allows only batch firing and its sides have their own, specific shape
- the magazine shaft is identical to the Sten - adapted to the magazine from MP 40
- processing is clean and high quality


The exact number of MP 3008 produced is not known. The planned production was 50,000 pieces/month, but in fact only a few thousand pieces were produced. Weapons seized in Rýnovice got into the emergency equipment of the post-war Czechoslovak army.
A modified grenade launcher from the K 98k rifle was tested on the MP 3008 submachine gun. The tests took place from 11 January 1945 at the shooting range in Kummersdorf. Cumulative and fragmentation ammunition was used. Due to the design of the weapon, the results of the shootings were quite unsatisfactory and this led to a halt to the tests. 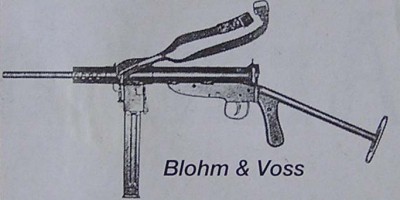 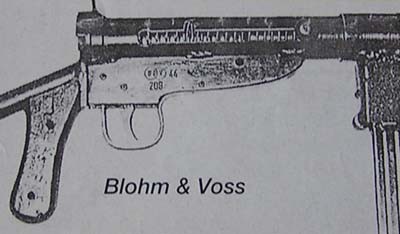 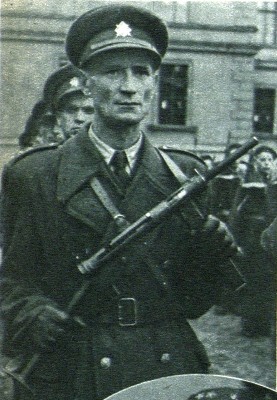 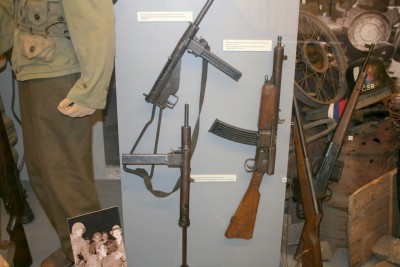 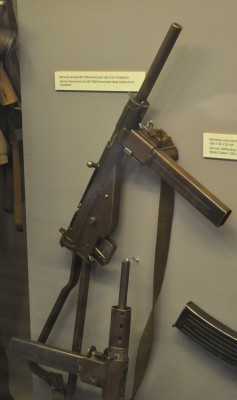