URL CZ: https://www.valka.cz/75-Levavasseur-t206423#585372Verze : 1
URL EN: https://www.armedconflicts.com/75-Levavasseur-t206423#585372Version : 0
brano MOD 3 years ago
In 1903, Capt. Léon René Levavasseur (6th Artillery Battalion?) draw he concept of a self-propelled vehicle armed with a 75 mm cannon in a closed steel body with a crawler chassis. It was probably the first tank design in France.
The project was submitted to the French General Artillery Committee (Comité Général d'Artillerie) and after two years of consideration, the proposal was presented by the Committee General Chairman. He generally described the project in letter No. 135 of 1.2.1905. The letter states that it was to be an artillery vehicle capable of overcoming difficult terrain, so far only passable with the help of horses, and which was to provide the crew and propulsion system with protection from direct firing of infantry weapons and indirect firing of artillery weapons. The letter describes the construction.
As usual, the progressive design did not meet with the understanding of its meaning and was not implemented even as a prototype. Levavasseur later modified his design, the amount for which a prototype was to be built (14,000 francs) was quantified, but in 1908 the project was definitively rejected. The project was almost covered in dust, but the memory of it came to the surface during tank projects Schneider CA from 1915 and Saint Chamond from 1916. The tanks conceptually copied this pioneering design, which was created long before the First World War. 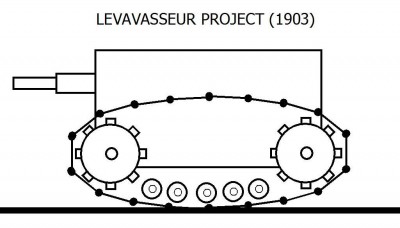