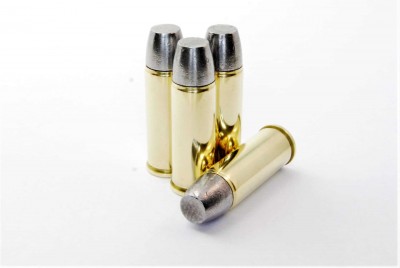 The end of the 1960s in the USA was marked by the transition from percussion revolvers to revolvers with metal ammunition. The leading company in this direction was Smith & Wesson.

Its technological advantage was tried to catch up with the then largest revolver manufacturer in the USA, the Colt armory.

It temporarily tried to compensate for its loss in technological rivalry by transforming existing models of percussion revolvers into revolvers charged with a single metal round caliber 44 Colt, but in 1872 she developed a completely new revolver and was In cooperation with the Union Metallic Cartridge Company, a new ammunition with a central ignition was constructed called the 45 Colt (. The ammunition is so designated in the period catalogs. aaaaaa]). Display full photogallery
[i]Sample of the original package of 12 rounds 45 Colt. It is ammunition made by the Frankford Arsenal in 1876. According to a catalog from 1890, the then price of these 12 rounds was about 26 cents. Today, such a box costs around $ 1,000, depending on the status. Source: upload.wikimedia.org

From today's point of view, the question is why the new cartridge was not developed as dimensionally compatible with the older 44 Colt and as such could therefore be used in older models of Colt revolvers.

The reason was probably two progressive elements of the new weapon system. First, the revolver was equipped with a rigid frame, which allowed the development of ammunition with significantly higher pressures than before. Second, the cartridge was equipped with a recessed projectile with internal lubrication, which improved both the handling of ammunition and increased the life of the weapon (which did not wear dirt sticking to projectiles with external lubrication).

Older revolvers, however, neither had chambers adapted to fire rounds with a recessed projectile, nor did they withstand the pressures of ammunition with a strong powder charge.

Due to its size, the new 45 Long Colt cartridge could not be loaded into the chambers of older 44 Colt weapons, so it was probably in a way a security measure, the adoption of which was aimed at preventing the threat of possible accidents of older weapons.

The US government introduced a new ammunition into the United States Army with the Colt Peacemaker revolver in 1873. However, the ammunition remained in service for only three years, because in 1876 it was next to Coltu SAA Smith & Wesson Model Schofield caliber 45 Schofield was also introduced into service.

The S&W cartridge was less powerful (was tested at an initial speed of 235 m/s), had a shorter cartridge and could be equipped with four different types of lead bullets in the range of 14.5 - 16.5 g In order to avoid problems in logistics, it was decided that this charge will become a standard US service charge. Army.

The 45 Schofield cartridge could be loaded into the revolver cylinder chambered for the 45 Long Colt cartridge (of course not the other way around, the 45 LC was too long for the Schofield revolver chambers), so Colt did not have to modify its weapons. it only began to produce a cartridge 45 Colt Government, which was a military version of the cartridge 45 Schofield with a lead bullet weighing 16.2 g. This cartridge served until 1892, when it was replaced ineffective charge 38 Long Colt. 
Of some interest then is that when U.S. Pat. The Army again demanded the introduction of a caliber 45 caliber, and John Moses Browning developed his famous pistol Model 1911, considered for her just a cartridge 45 Colt. In the end, this was not possible due to the dimensions of the charge (the handle would come out too big), so he developed a shorter charge 45 ACP, for which de facto duplicated the ballistic performance of the 45 Colt ammunition.

Although the 45 Long Colt failed in U.S. Pat. The Army, however, gained considerable popularity in the civilian sector, was used as a defense, sports and hunting.

When the smokeless powder bullets arrived, the bullet seemed to fall into oblivion. The charge was quite large, which was dictated during its development by the size of the black powder charge. Ammunition now appeared with similar performance and much smaller dimensions, which facilitated the construction of weapons with smaller sizes.

However, because its popularity was closely tied to the fame of the Peacemaker revolver, it did not disappear.

In recent years, however, the charge has experienced a considerable renaissance. With the ever-increasing popularity of cowboy action shooting, for example, a number of lever repeaters are being produced for him. This is a paradox, because in the 19th century no long weapons were made for this charge.

The development of rifles for this charge also led to its expansion in the role of hunting ammunition, so it is equipped with missiles with controlled deformation and there is a more powerful version called + P. Ammunition + P can be used only in lever repeaters or revolvers with a large frame.

Another "rediscovered" role of this charge is defensive use. The greatest credit for this goes to the Taurus armory, which has developed new models of defensive revolvers for this charge, such as the Taurus 450 model.

A special group of weapons are revolvers and revolver carbines ( and even derringers) with cylinders that allow the use of both a 45 Colt cartridge and a 410 caliber shotgun cartridge. Display full photogallery
Taurus Judge revolver with a cylinder that allows you to charge a shotgun cartridge caliber 410 (far right), or a 45 Colt cartridge (second from the right), in the photo for comparison also a cartridge 9 mm Luger (far left) and 38 Special (second from left)
Source: https: //www.flickr.com r88JHf-e5TMcG

Modern ammunition is usually made with both smokeless and black powder, as the rules of some cowboy action shooting associations require the use of black powder as authentic ammunition.

Also, the range of projectiles used is very wide today, depending on the determination of the type of ammunition. While lead bullets are used for cowboy shooting, for hunting or defensive purposes, ammunition is made with all-shell, half-shell, and expansion bullets.

The original ammunition laboratory used a 255 round (16.5 g) lead bullet and a 40 grain black powder charge.The result was an initial velocity of 247 m/s and an initial energy of 501 J. From the moment it was created, until the arrival of the 357 Magnum, it was the most powerful mass-produced revolver cartridge in the United States.

The cartridge had a considerable internal volume and later drawn brass cartridges were also suitable for the use of smokeless powders introduced at the turn of the century. Factory smokeless powder ammunition yielded only a small increase in energy (570 J) and speed (260 m/s), but athletes and hunters who reload their ammunition and need higher power ammunition soon reached speeds of around 330 m/s. missiles weighing 255 grains, which gives energy 908 J. The charge in the 50s of last century became the basis for an extremely powerful charge .454 Casull . 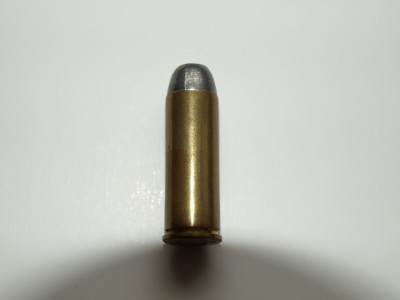 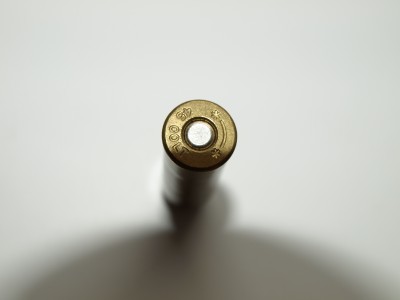