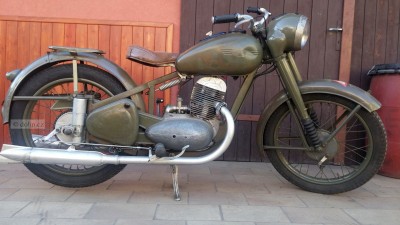 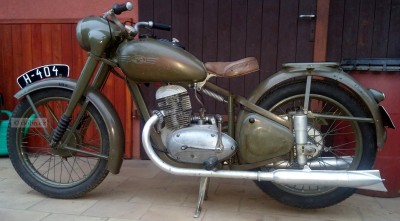 URL : https://www.valka.cz/JAWA-250-typ-11-t217680#610510Version : 0
Dolin404 3 years ago
The photo above is not a military version of the motorcycle Jawa 250 (type 11) the so-called "Shuttlecock", but an ordinary civilian machine. "Soldiers" how are you today motorcycles serving in the army says had green paint and exhaust pipes + parts that were normally in a shiny chrome modified matte chrome (possibly in color - wheel rims, exhausts,...). Coloring it was probably variable. Supposedly the army had bought and ordinary motorcycles, which in Přelouči(AOZ 010) varnishing on the green. However, this probíhlao even for individual departments.


Today, it is a modern rebuild of the classic civilian version of the "soldier". The original "soldier" is but on the frame sticker and in the TP struck/marked from the receipt OF the symbol of the swords.. 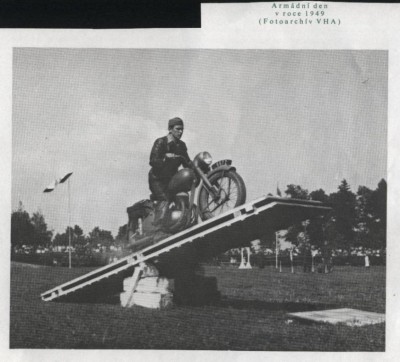 URL : https://www.valka.cz/JAWA-250-typ-11-t217680#298072Version : 0
STANISLAV VYSTAVĚL 13 years ago
Military Shuttlecock, originally some Pilsner of the crew who passed by us in the workshop refurbishment. Machine is in original condition, some parts have undergone restitution and reconstruction. This concerns mostly the painting front. The bike is fully functional and roadworthy.
The motorcycle is not marked with a patch over the brand name OF.. 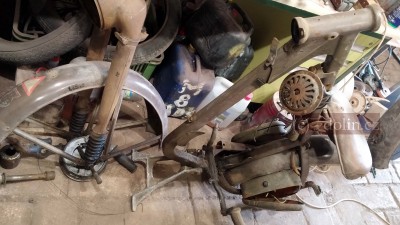 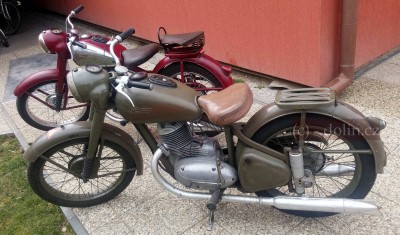 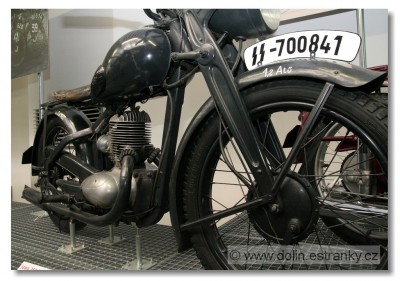 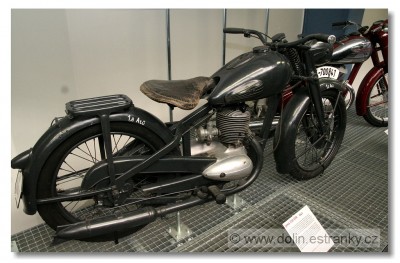 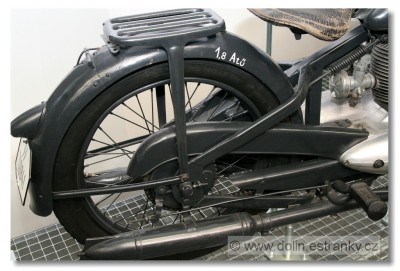 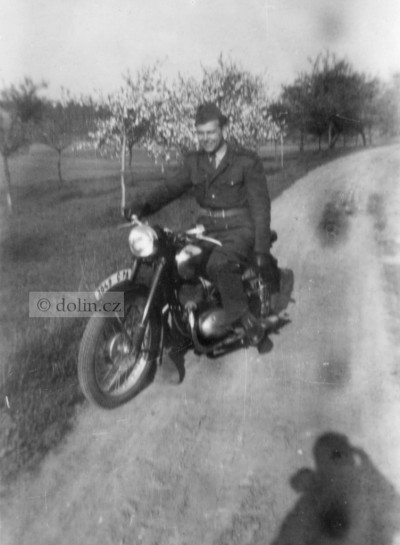 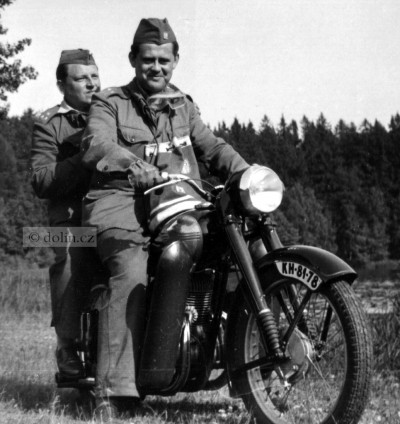 URL : https://www.valka.cz/JAWA-250-typ-11-t217680#610929Version : 0
Dolin404 3 years ago
That's not all fully "kosher", also shows this machine photographed in a museum in Israel. It's supposedly a prototype of this type. Well when blížším point of view, it can be fairly easily disproved. For the word prototype, one could consider that will deal about anything what was made in the beginning of the production, which runs until 1946. The details of the machine in the photos do not match. And it's not just some smaller parts or details, but on essential parts of the structure. This controversy I mention only as a curiosity.

Below I have outlined the basic, the main differences:
- The frame is with the newer brace the head frame with the internal hardening. Valid for models Zbrojovka and Communist, therefore, about the year of 1949.
- The front fender does not have a hem toward the inside, it's about execution, supplied also from about 1949
- Front fork has four, not just the 2 grease nipples that had motorcycles from the beginning of the production
- Pressed logo "FJ" on the tank popped up in 1947 motorcycles from 1946 completely without a logo. Even the prototype in the photo below has the logo painted. Here's just a (wrong) zakitované and airbrushed paint.
- The license PLATE has the same number combination as the exhibit located in the NTM!
- Of those smaller details I will give: aluminum control lever mounted in the year 1953/1954, gray rubber leg warmers handlebar referred to today as "the keg", supplied to the powered cycle Stadium. The first Péráky had black leg warmers with a pattern rádlování referred to today as a "pineapple".. 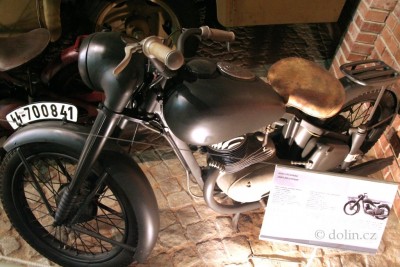 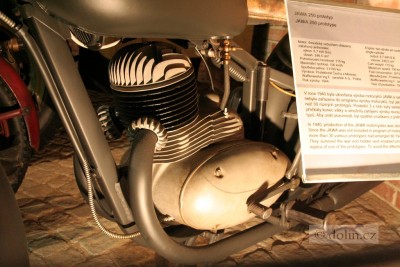 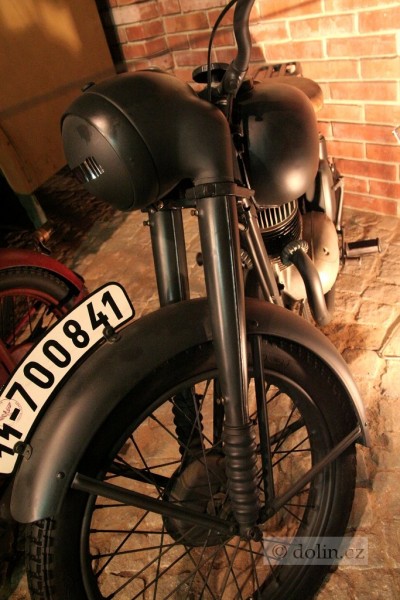 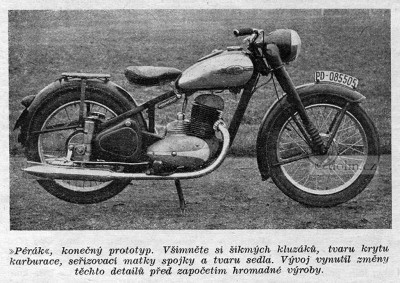 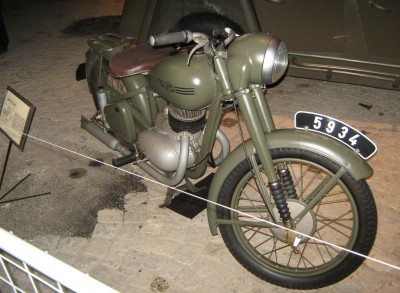 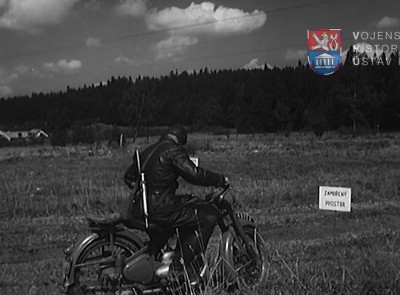 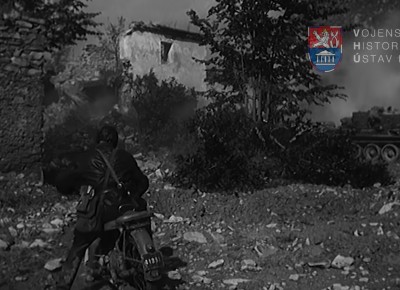