URL : https://www.armedconflicts.com/Paget-Bernard-Charles-Tolver-t227703#633205Version : 0
buko1 MOD 9 months ago
URL : https://www.armedconflicts.com/Paget-Bernard-Charles-Tolver-t227703#633206Version : 0
buko1 MOD 9 months ago
General Sir Bernard Charles Tolver Paget , GCB, DSO, MC was born on 15.09.1887 in Oxford, in the family of Rev. Francis Paget (English theologian, writer and later 33rd Bishop of Oxford). His father was the second son of Baronet Sir James Paget, a well-known surgeon and pathologist, the discoverer of Paget's disease, who, together with Rudolf Virchow, considered himself the founder of modern scientific pathology.

1. From 1901 to 1906 he studied at the prestigious Shrewsbury School founded by the King Edward VI. at Royal Military College at Sandhurst. After graduating, he embarked on a military career ( see below - point 2. ) and took part in both world wars. He was wounded several times in World War I and won several awards for his heroism in battle. On February 7, 1918, he married Winnifred Nora Paget, with whom he had two sons, both of whom actively participated in the fighting of World War II. He ended his active military career in 1946, but even after his service he continued to work in this area. From October 1946 to October 1955, he served as Colonel Oxfordshire and Buckinghamshire Light Infantry. In May 1954 at the headquarters of the regiment ( Osnabrück / ) hands over a new battle flag to the regiment in the colors of the Queen and subsequently, 08.05.1955, hands over an old battle flag in custody in Christ Church Cathedral v Oxford. In Osnabrück / is also held on October 14, 1955, a ceremonial march associated with his resignation. In addition to this honorary position, he also served as Colonel of the Intelligence Corps () and Colonel of the Reconnaissance Regiment ). He was also president of the Army Benevolent Fund ( Army Benevolent Fund ). In addition to military and veteran affairs, he also worked as a leader in education and health care. From 1946-1949 he was director of the Ashridge College of Citizenship () and from 1949-1956 he was governor of the Royal Hospital of Chelsea ([i] Royal Hospital Chelsea ). In addition, he was governor of Radley College, Eastbourne College, St Edwards and Welbeck College . In 1957 he moved to Petersfield (Hampshire), where in 1960 he was appointed Deputy Lord Lieutenant Hampshire. He died on February 16, 1961 at the age of 73.

The younger son Tony Paget fought in the rank of lieutenant in the ranks of the 1st Battalion Oxfordshire and Buckinghamshire Light Infantry (in the same unit began his army service and father) and died of injuries from the Battle of Reichswald March 5, 1945. The older son, Julian Paget, fought in the ranks ofColdstream Guards in northwestern Europe and continued his military career after the war. Before leaving for the reserve in 1969, he commanded the battalion of this regiment. He became a military historian and the author of several publications, in 1971-1991 he served as the Queen's Main Ceremony and in 1972 he inherited the title of Baronet (4 in a row). He died on 25.09.2016.

2. After finishing the Royal Military College he was on 13.11.1907 appointed as Lieutenant to the Oxfordshire Light Infantry, where he was appointed to the 2nd Battalion stationed on Tidworth on 15.12.1907. He served in this unit only for a short time, as of February 5, 1908, he was reassigned to the 1st Battalion, which at that time was performing crew duty in India (Laknaú.

The outbreak of World War I caught Lieutenant Paget as an aide to the commander of the new 5th (Service) Battalion Oxfordshire and Buckinghamshire Light Infantry Regiment stationed in Aldershot, which was formed mainly by volunteers applying for service at the so-called Kitchener's army, built for deployment on the continental battlefields of World War I. Along with the battalion was 20.05.1915 sent to Western Battlefield, where the unit was assigned to the 42nd Infantry Brigade ( 42nd Infantry Brigade ) and later the 14th Light Division ( 14th (Light) Division ). In June 1915 he was promoted to the rank of captain.

He took part in the Battle of Loos (25.09.1915) and was one of two battalion officers who survived the battle. September 30, 1915 he was appointed temporary commander of the 5th (service) battalion and November 20, 1915 he was transferred to the position of Brigadier Major at the 42nd Infantry Brigade. In November 1915 he was awarded the Military Cross. During the combat service he was 4 times for his actions Mentioned in reports and in January 1918 he received the Council for excellent service. He was wounded a total of 5 times, and after the last injury on March 26, 1918, he was evacuated back to Britain and appointed as an instructor at the Staff Faculty ( Staff College ) in Cambridge, where he served until the end of the war in the honorary rank of major (he won it in 1917).

At the end of the war remained to serve in the army, where he served in various positions. He was appointed to the rank of major major in 1924, then in 1925 he was awarded the honorary rank of lieutenant colonel and in 1929 he was appointed to the rank of colonel. In this rank, he was appointed in 1930 as the commander of the Warehouses in the barracks Cowley Barracks (the unit provided care for mobilization supplies intended for units mobilized during the war). Due to his family background (the bishop was not only his father but also his uncle Luke Paget) he founded the creation of a regimental chapel in Christ Church Cathedral in Oxford in 1930. In 1932 leaves the British Isles and moves back to India as Chief Instructor of the Faculty of Staff in Quetta (today Command and Staff College ), where he worked until 1934. 21.07.1934 takes up the post of Imperial General Staff in London to the position of General Staff Officer 1st Degree. In the years 1936-1937 he commanded the 4th Quetta Infantry Brigade ( 4th Quetta Infantry Brigade ), in December 1937 he was appointed to the rank of Major General and took over the position of Commander of the Staff Faculty in Camberley ( Staff College Camberley ), where it operates until 1939.

In September 1939, Britain declares war on the Nazis Germany and begins to mobilize units forming the Territorial Army. In November 1939, Paget was appointed commanding general of the mobilized 18th Infantry Division, where he served until April 1940 and then (19.04.1940-14.05.1940) commanded the expeditionary forces (so-called Sickle force) deployed in Åndalsnes . Under his command were expeditionary forces consisting of two infantry brigades (15th and 148th militia) and other support units consisting of artillery, anti-aircraft and anti-tank artillery, engineering and medical units. The landing operation took place on April 17-18, 1940, and then the units went inland towards the city of Kwam. After the occupation of Dombass, they were to continue north to Trondhi. However, the original orders soon changed, the advance was directed towards Lillehammer and the advancing troops had to fight several skirmishes with the enemy in their rear from Dombass.

On April 23, 1940, a second wave of expeditionary forces began to land in the port of Åndalsnes, consisting mainly of units of the 15th Infantry Brigade, which gradually took up positions around Kwam, where they participated in the fighting on the 25th. and 26.04.1940. Despite their opposition, the expeditionary forces were forced to gradually withdraw from Kwam. Other smaller battles took place around Kyjor and a village called Otto. British forces were gradually pushed back to Åndalsnes and during 30.04.1940 they were evacuated from there by the British Navy (the last British soldiers and vessels left the port before 2 o'clock in the morning on 01.05.1940).

After returning from Norway, he again took command of the 18th Infantry Division (15.05.1940-27.05.1940).From 31.05.1940 he worked at Main Headquarters of the Domestic Forces, while already 05.06.1940 takes over the function of Chief of Staff of this headquarters. After the creation of Southeast Command takes over the function of the commanding general of this headquarters, and then on December 25, 1941 he was appointed commanding general of the Main Command of Domestic Forces. He then acts as commander 21. Army Groups and Middle Eastern Command. 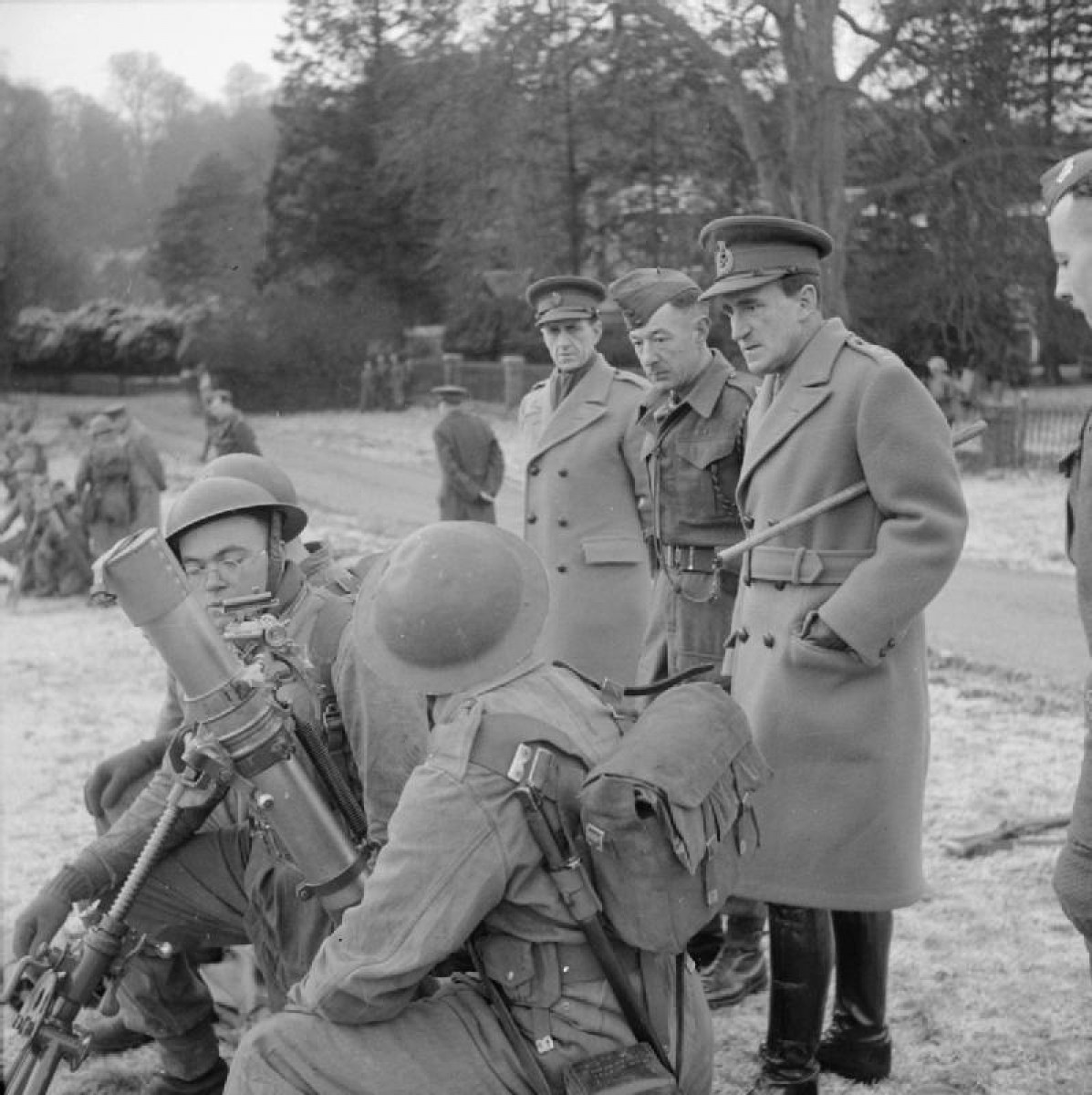