URL : https://www.armedconflicts.com/Heavy-Tank-Company-Hummel-t228624#635352Version : 0
Gebirgsjäger MOD 5 months ago
At the beginning of July 1944, the heavy tank company Schwere Panzer-Kompanie Einsatz Dünkirchen was assembled in Paderborn as the so-called alarm unit (Allarmeinheit). It was armed with fourteen tanks Pz.Kpfw. VI Ausf. E Tiger, which she took over from the Tank Replacement and Training Division 500, part of the team came from the 2nd Company of the Heavy Tank Division 504 - including its commander Lieutenant Hans Hummel, who became the commander of the new unit and after whom the company was named. The company was trained in the Sennelager training area.

On September 17, 1944, British paratroopers landed in Arnhem (Operation Market-Garden), the next morning the company sounded the alarm and received an order to move to the area. On September 19, she reached the town of Bochom by rail on the border with the Netherlands, and after an 80-kilometer shift on her own axis, she approached Arnhem and joined the 9th SS Hohenstaufen Tank Division. Along the way, two tanks were damaged by PIAT anti-tank gunfire, but they were put into operation and arrived in Arnhem the same evening.

On September 19, 1944, at two o'clock in the morning, a pair of Tigers reached the bridge over the northern arm of the Rhine and began systematically shooting at the surrounding houses occupied by British paratroopers. One of the tanks was hit in the tower by a projectile from the anti-tank cannon Ordnance QF 6-pounderlocated in the British Brigade headquarters building, his crew suffered injuries. Both tigers withdrew, the undamaged tank then supported grenadiers from Kampfgruppe Brinkmann, eliminating the last outbreaks of British resistance at the bridge.

After the end of the Battle of Arnhem, the company advanced from the Netherlands towards Aachen from the end of September, in the second half of November it provided support to the 15th Tank Grenadier Division in the area of the village of Tripsrath.and lost 1 Tiger. On November 19, the company commander, Captain Hummel, was mortally wounded and Lieutenant Flöhr took command. At the end of November, the company was deployed to Utrecht to rest and replenish.

On December 18, he was transferred to the Heavy Tank Division 506, until February 1945, the company operated in the Eifel Mountains and the area west of the Rhine. When it was detached from the 506th Division on February 16 and became a separate unit again, it had only 5 tanks. Subordinate to LXXXI. the army corps supplemented its status and was deployed in the woods near Elsdorf in North Rhine, in the subsequent retreat fighting lost three tanks. At the turn of February and March, she crossed the Rhine near the town of Koblenz and operated in the Sauerland region. On April 5, the company had 11 Tigers. She was assignedTank Brigade 106, with which it withdrew to the Ruhr.

For the remaining members of the company, the war ended after the capitulation of Army Group B in the Ruhr Boiler on April 21, 1945 in American captivity. 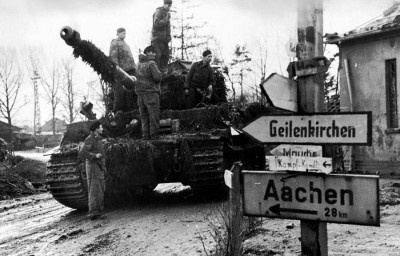