Tank project with a rotating tower and a fixed extension

URL : https://www.valka.cz/CZK-Projekt-tanku-s-otacivou-vezi-a-pevnym-nastavkem-t237852#657514Version : 0
brano MOD 9 months ago
In 1936, an extremely interesting project of a new tank concept was created in the Tatra Kopřivnice company. The project was created at a time when the company was finishing prototypes of tanks T-III and experience with this category III tank development program led to this original idea of tank design. The design of the tank was developed on the drawing The design of the tank with a rotating tower and a fixed extension from 15.7.1936. The proposal was filed on August 6, 1936 at the Patent Office, the patent itself was recognized on January 15, 1938.
The classic concept of tanks was considered insufficient by the creators. The tank driver had a limited view of the battlefield and had to rely on the instructions of the commander, who had a place in the tower and had more opportunities to observe the surroundings. When the tower rotated, part of the ammunition remained in the hull and therefore was inaccessible when the tower was rotated. In the classic arrangement, the crew space was exposed to noise, odor and high temperature, the source of which was the tank engine. Even in the event of an engine intervention, there was a great danger of the crew compartment being endangered by the fire. The armor protection had to copy the shape of the crew's combat space and therefore it was necessary to protect the armor with a large "deaf" space. This meant that with the ever-increasing need to increase the thickness of the armor, the weight of the vehicle increased. This required the use of a more powerful engine, which required more space, and it was an endless cycle of increasing the size and weight of the tank. The original design of Tatra wanted to eliminate these disadvantages. The driver's seat in front of the platform was eliminated, its location was on top of a solid hollow column beam located approximately in the axis of rotation of the tower. His position was the highest of the entire crew and he had a great view. It was protected by a solid turret that had as strong armor as the strongest armored areas of the tank. All control elements of the steering, motor, gearbox, brakes were guided in the space of the hollow column beam. In the rotating tower of the tank was mounted primary and secondary armament, equipment, instruments and ammunition, which was available to the crew at any rotation of the tower. The commander and the shooter had their seats in the tower. The tower was powered by a tower gearbox from the engine. Fine-tuning the measurement was done manually. Since most of the weight was concentrated in the tower, this solution would advantageously reduce the center of gravity of the machine. Reducing the armor area would have the advantage of an overall lower vehicle weight as the armor thickness increases. Overall, the vehicle would be small in size and the possibility of intervention would be less.
However, the design of this vehicle has not been realized. Maybe also because of the cessation of the project T-III, on which it was based. I assume that in the atmosphere of a tense political-military situation, there was no room to verify the new design concept. Despite the teacher's original concept, it is questionable to what extent this concept would find application.

Radomír Zavadil - Project of a tank with a rotating tower and a fixed extension from 1936 (Tatra armored vehicle concept of a new concept), HaPM 10/2001, ISSN: 1210-1427
(Processed according to the archival materials of the Industrial Property Office, Tatra Kopřivnice archive) 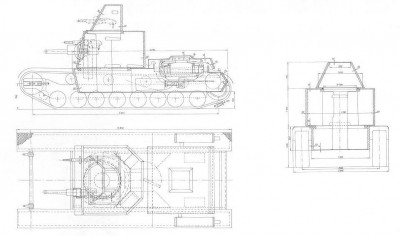 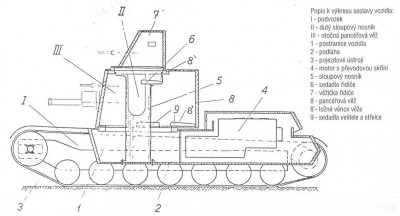