URL : https://www.valka.cz/Tezka-rota-stihacu-tanku-pozemniho-vojska-614-1944-1945-t241462#667990Version : 0
Gebirgsjäger MOD 7 months ago
During the retreat in Galicia during July 1944, Heavy Division of Tank Fighters 653 lost most of the Elephants. According to reports from August 1, the unit had only 12 machines, most of which required extensive repairs.

Because it was decided to rearm and rehearse the unit at Jagdtigers, the 1st and 3rd companies were deployed to the training area Fallingbostel and the remaining Elephants received the 2nd Company. It moved to Krakow, where the equipment was to be repaired. She received two more machines from Austria.

On September 19, 1944, the 2nd Company with 14 combat-capable machines was subordinated to 17. army with orders to build defensive positions between Krakow and Tarnov.

It was made available on December 15 for 4. Tank Army and renamed to Heavy Company of Ground Fighter Tanks 614.

In the second half of January 1945, during the Soviet Vistula-Oder operation, the company lost all the Elephants, most of them irretrievably, during the defensive battles in the area of Kielce; only four [ and one rescue Bergepanzer Tiger (P) ] were reported as serviceable in late January reports.

Other fates of the unit are an eloquent testimony to the agony of the Great German Empire in the early spring of the last war year.
On February 6, it was decided to move to Stahnsdorf, Germany for replenishment.
On February 20, an order was issued to arm 10 Elephants, or Jagdtigers.
On February 25, the company commander, now deployed west of Wünsdorf, states in a report that he has only 4 Elephants in need of repairs.
On April 22, 1945, it became part of the improvised combat group Kampfgruppe Ritter, defending the access roads to Zossen.

Then the company joined the futile defense of Berlin:
- one Elephant was left at Mittenwalde 30 km southeast of the capital due to a mechanical failure;
- another Elephant took up a firing position at Klein Köris at the junction at Löpten, where it was destroyed;
- The two remaining planes reached the center of Berlin and took part in the fighting on Karl-August-Platz and the Church of the Holy Trinity, on May 1 they were captured by the Red Army.

The company's support and supply personnel managed to escape from Berlin to Kiel, where he was captured by the British. 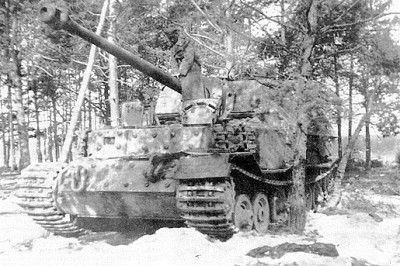