2 cm MG 151/20 Flakdrilling auf Opel Maultier (field treatment) - field treatment 8 cm Raketen Vielfachwerfer auf Fahrgestell Maultier
2 cm Flak 38 auf Sd.Kfz.3 (Opel Maultier)
URL : https://www.valka.cz/Maultier-Sd-Kfz-3-polopasove-nakladni-vozidlo-historie-vzniku-a-prehledova-tema-t26272#94707Version : 0
Admin MOD 16 years ago
After the invasion of the Soviet Union, German troops quickly found out what problems awaited them in difficult terrain without major paved road infrastructure. Especially in the period of "rasputice". It was a period when the whole flat country, including the roads, became muddy and marshy. German troops already had this experience during the First World War, and even then there was an effort to develop means of transport that would be able to cope with this challenging terrain. In the years 1917/1918, designs of half-track vehicles Marienwagen I and Marienwagen II were created. In the 1930s, a series of semi-track tractors weighing 1-18 tons was created. However, they were structurally more demanding and expensive vehicles.

In the years 1941-42, the idea arose to use and modify standard trucks produced on a mass scale. The standard two-axle vehicle was to be stripped of its rear wheel axle and a simple tracked chassis was to be fitted in its place. The 3-ton platforms of Magirus S 3000 vehicles were to be used, Ford V 3000 S and Opel 3,6-36 S. A vehicle weighing 4.5 tons was to be created, the platform of which was to be used from Mercedes-Benz Typ L 4500 S.
The original truck platforms were in the weight category 3 tons, in the case of modifications to semi-track vehicles, due to the higher weight of the track part of the chassis, the load capacity was reduced to 2 tons. The original plans included an order for 8,500 Maultier vehicles, later orders were to increase to 90,000 vehicles.

Two institutions worked on the construction of the tracked part of the chassis. The first was Opel, but the competing design was the Waffen SS technical department.

Opel's design included a 460 mm diameter drive wheel with 16 guide teeth. The belts were to be braked by an additional hydraulic brake. Belt articles should be of type Kgs 67/280/90 ( Pz.Kpfw.I).

The chassis developed by the Waffen SS was a copy of the English armored personnel carrier Loyd Carrier, more of which fell into German hands after the fall of France in 1940. The two designs underwent several comparisons. Opel's design was cheaper, required less production time and was less expensive. In addition, Opel's simple design required no additional production machines, while the Waffen SS solution required the delivery of new machines worth 124,000 Reichsmarks.

Despite the obvious advantages of Opel's design, the Waffen SS insisted on its solution. At the end of 1942, driving tests were carried out at the Berka polygon to show which design was better. Already during the tests, 40 vehicles were produced and sent to the front. Other vehicles were completed, it was estimated that by the end of 1942, about 300 vehicles would be available. So far, four test vehicles have been tested. One vehicle had a mileage of about 8,000 km, the rest had a mileage of about 5,000 km. Despite the demanding tests, the tested vehicles withstood and did not show any significant problems. This led to the decision that the Waffen SS design was introduced into series production.

In addition to these designs, there were other designs and prototypes that used, for example, a tracked chassis from a 3-ton artillery tractor Sd.Kfz.11 (Borgward platform), from a French half-tracked tractor Unic P 107 (Opel and Ford platforms), design by Dutch company Trado (Opel platform), or design by Van Doorne (Opel and Ford platform). Together with the design of the Opel tracked chassis, these designs only ended in the form of prototypes. 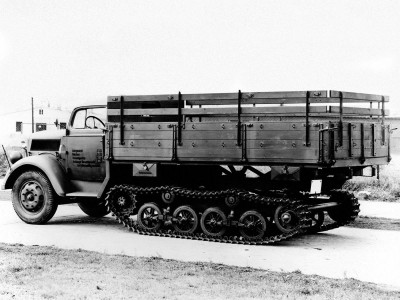 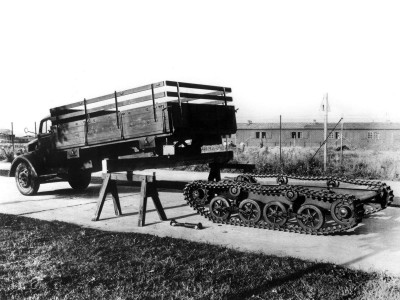 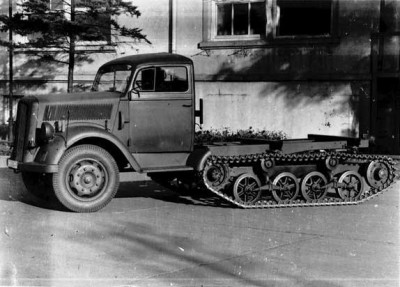 URL : https://www.valka.cz/Maultier-Sd-Kfz-3-polopasove-nakladni-vozidlo-historie-vzniku-a-prehledova-tema-t26272#621949Version : 0
brano MOD 2 years ago
Vehicle with a tracked part of the chassis designed by Waffen SS. The chassis came from the British Loyd Carrier. 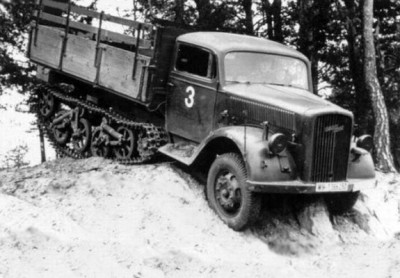 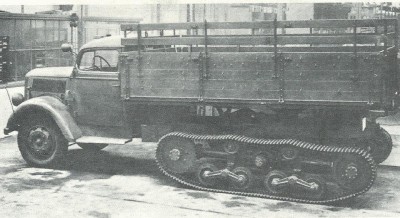