The development of the 2S25 tank destroyer was started on the basis of the assignment of the Russian airborne troops, which required a new airborne machine designed to fight the enemy's armored vehicles. Construction work on the new vehicle began at the Volgograd Tractor Plant probably in 1994, based on the airborne vehicle BMD-3.

Compared to the original BMD-3, the chassis was extended by two pairs of wheels. In the front part, in the longitudinal axis of the vehicle, there is a driver's workplace equipped with three daily periscopes. To the left and right next to the driver are the positions of the commander and the shooter, each equipped with its own hatch. The commander and the shooter should use these places for airdrops and movements, because they are more comfortable than those in a relatively cramped tower.

The body of the vehicle should easily withstand 7.62 mm rounds and 12.7 mm at the front. In the middle of the vehicle is equipped with a two-seater tower, in its right part sits the commander, whose workplace is equipped with a stabilized sight with a laser irradiator targets for laser-guided ammunition. On the left is the shooter's station with a stabilized sight and laser rangefinder.

The rear of the vehicle is reserved for a 2V-06-2S diesel power unit with an output of 375 kW.

The main armament of Sprut-SD consists of a 125 mm automatic cannon 2A75 with a smooth bore barrel, which was developed by the Ekaterinburg Artillery Plant 9 based on the cannon 2A46 used in tanks of the series T-72, T-80 and T-90. One of the modifications is to increase the length of the recoil by about twice. Laser-guided ATGM 9M119 Refleks can also be fired from the cannon. The cannon 2A75 is coupled with a machine gun PKT caliber 7.62 mm.

The manufacturer declares that the 2S25 can be dropped from the aircraft with the crew inside the vehicle. The vehicle is fully amphibious, the equipment includes filter ventilation equipment, smoke grenades and an automatic fire extinguishing system. 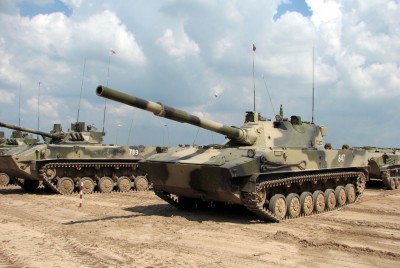