URL : https://www.valka.cz/Mauser-K98a-t29320#614685Version : 0
Gebirgsjäger MOD 2 years ago
History
In 1908 the German army for the needs of certain types of troops (cavalry, artillery, engineers, etc.) has introduced a new carbine length 1100 mm (with barrel length 600 mm), marked "Karabiner 98" (as well as its predecessor, established in 1902). The gun is marked down bent crank conclusion, whose ball was on the bottom topped off with a serrated pad, and a hook bayonets a hook for building rifles in the kozelců. Without dismantling the invisible difference are tapered transitions between the different external diameters of the barrel (in the meantime, were the transitions of the step).
Carbine K98a were standardly equipped with a removable chránítkem the muzzle. Sheath is into service on the estuary and ensure the rotation so that the claw on the chránítku "crawled" behind the hook on the carrier midges. Cap protectors was tilting, so removing the protectors from the shooting wasn't absolutely necessary.
The letter "a" in the designation of the weapons have been added additionally in 1923, after the introduction of the carbine K98b, therefore, the "and" does not even appear in the designation of weapons.

Design
Carbine Mauser K98a is a refresher gun with swivel odsuvným conclusion. Bullets are stored in double-row, fixed the mailbox, located in front of the trigger guard and the trigger. The box is filled from the top by charging the tape.

The main parts of the rifle are: the Barrel with sights, case conclusion, conclusion, gas -, and stock.

The barrel length of 600 mm is provided with four right-handed grooves with a constant pitch of 240 mm. On the barrel is also soldered the base of the visor.

The barrel is in the back screwed into the breech that connects all the essential parts of weapons in a single unit. In case the conclusion is also moving conclusion. The rear part of the breech is the so-called bridge, in which the front side are vyfrézovány cutouts for the deployment of charging the tape. On the left side of the bridge is screw fastened spring-loaded bracket the conclusion, which also forms the rear stop conclusion.

The conclusion consists of závěrnice, extractors, ring extractors, a firing pin, the percussion spring, striker nuts, caps, stud caps with a spring and a fuse.
In závěrnici are three locking barbs (two front and one rear) and right of her outgoings equal to the crank end. At the head of závěrnice is an opening for firing pin the firing pin. On the right side of the závěrnice is the rotary extractor.
The firing pin is threaded through the drum spring and at its rear end is a bayonet joint deployed úderníková matrix, which has at the bottom of the bar with the bevel, which corresponds to the screw surface in the viewport závěrnice. When turning závěrnice left is úderníková matrix odtlačována backward and thus is stretched by a drum spring. At the bottom of the strips, striker nuts are two barbs, used to capture the cog of the sear.
The individual parts of the conclusion connects the enclosure. In it is stored a fuse and a pin that ensures the correct position of the caps against the závěrnici and also prevents the rotation of an unlocked breech. Křidélková fuse has three positions - left disarmed, up to ensure, and when the position of the wings fuse to the right is ensured and in addition blocked the movement of conclusion.
Trigger system, placed in a pouch the conclusion consists of the trigger with the pin, the trigger spring and the sear with the pin. The spring pushes the spoušťovou the lever up, where your cog captures úderníkovou nut. Pressing the shutter button will lower the rear of the sear, claw comes out of the shot and úderníková matrix is released. After the release of pressure on the trigger to spoušťová lever returns to its original position.

A gas-whose body forms a single unit with the trigger guard of the trigger, is the two screws from the bottom screwed to the case conclusion. The bottom of the mailbox is to the body attached with spring-loaded pin. In the bottom of the clipboard is inserted folded flat spring, which pushes up the feeder rounds. The bullets are in a box stored in a block pattern in two rows.

Butt and nadpažbí are made from a full walnut or beech wood; exceptional grip made from a different kind of full wood. Case conclusion is the barrel attached with two continuous screws, which also connect the housing with the cartridge box. The barrel is the barrel attached with two hlavňových sleeves, while from the front forward stands out capture bodáku. The recoil of the shot is on the butt is transmitted by foursquare čepového beds, located below the cartridge chamber.
In hlavišti the butt is a hole for the guard to accept the passage of the carrier belt and behind him is a bed for disassembly of the conclusion. The rear part of the butt is against damage to the protected by a steel boot. 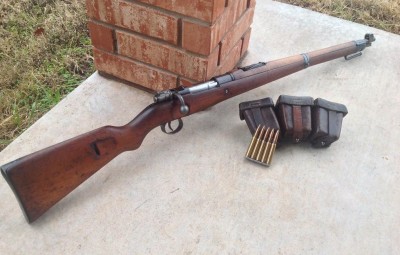 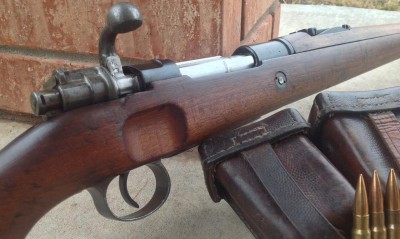