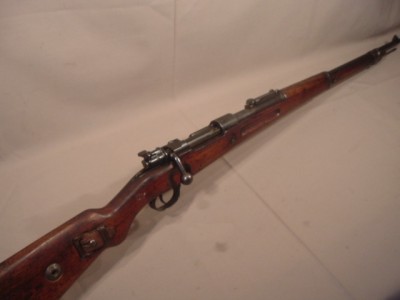 URL : https://www.valka.cz/Mauser-K98b-t29321#614687Version : 0
Gebirgsjäger MOD 3 years ago
History
Based on the experience of the fighting of the First World War, there were several modifications of the G98 rifle shortly after its end. The new weapon, the same dimensions as G98 and very similar Radfahrer Gewehru, was introduced in 1923 into the armament of the German Reichswehr as " Karabiner 98b". In contrast to the G98, the new rifle had a downward-curved breech handle with the appropriate recess in the stock for the handle bullet and a carrying strap attached to the left. The visor was also new, which was adjustable on the K98b in the range from 100 to 2000 meters.
From the carbine K98a it can be recognized at first sight mainly by the absence of a hook for building weapons in goats, by a standard fly without a protector and by the absence of a hole in the front root of the trigger guard.


Construction
The Mauser K98b rifle is a repeating weapon with a revolving retractable breech. The ammunition is stored in a two-row, fixed ammunition box, situated in front of the trigger guard. The box is filled from above with a charging tape.


The main parts of the rifle are: Barrel with sights, breech case, breech, ammunition box and stock.


The barrel with a length of 740 mm is equipped with four clockwise grooves, with a constant pitch of 240 mm. The base of the visor is also soldered on the main.


The barrel is screwed at the back into the barrel case, which connects all the basic parts of the weapon into one unit. The breech also moves in the breech housing. In the rear part of the breech housing there is a so-called bridge, in the front side of which cutouts are milled for attaching the charging tape. On the left side of the bridge, a spring-loaded bolt holder is fastened with a screw, which thus forms the rear stop of the bolt.


The individual parts of the closure are connected by a closure. It contains a lock and a pin, which ensures the correct position of the shutter relative to the bolt and also prevents rotation of the unlocked bolt. The aileron safety device has three positions - unlocked on the left, locked at the top and in the position of the safety aileron on the right it is secured and, in addition, the movement of the bolt is blocked.


Marking
On the left side of the case was engraved the designation " Karab. 98b ', on the upper surface of the breech sleeve was the name of the manufacturer and below it the full year of manufacture. 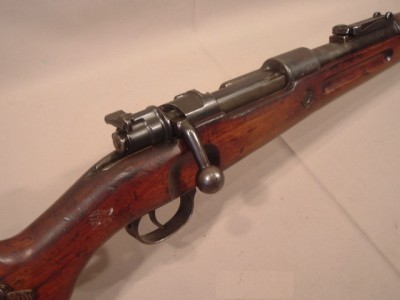