Once high-altitude reconnaissance and bombing began to appear over Great Britain Junkersy Ju 86 P (since the beginning of 1941), did not make a request for the construction of a new high-altitude versions of the Spitfire with a pressurized cabin wait a long time. This request arose during a meeting of the Royal Aircraft Establishment, which took place on February 17, 1941 in Farnborough.

The designers of the Supermarine factory underwent a temporary reconstruction Spitfire Mk.VB. The new aircraft was factory designated Supermarine Type 350 and the RAF later adopted it as Spitfire HF Mk.VI. The new aircraft was powered by a Rolls-Royce Merlin 47 engine, which was a high-altitude version of the engine Merlin 45, the high-altitude engine had a compressor with an impeller diameter increased to 10.85 "(275.59 mm), which took some of the power, but kept this power of 1,415 horsepower. The engine spun a four-bladed Rotol propeller.

To pressurize the cabin was used The Marshall IX A compressor in the cabin maintained a pressure corresponding to an altitude of 8,690 m. The pressurization of the cockpit was possible thanks to two new bulkheads mounted in front of and behind the cabin, all bulkheads and steering cables passed through these bulkheads, all bushings were sealed. pilot cover, it closed on the ground and could not be moved during take-off or landing, it could be dropped in case of emergency.Other advantage was the sealing of the cabin, the cabin was heated and at maximum operating heights there was a pleasant 8 ° C, necessary to say that vv The lower altitudes here in the summer months were uncomfortably hot.

The maneuverability of the new high-altitude Spitfire at high altitudes was ensured by the extended wings (span 12,240 m). Thanks to these wings, the "six" at a height of 9,700 m could easily maneuver the classic "five" and during one and a half turns the Spitfire sat with the extended wings of the "five" behind its tail.

The development of the high-altitude Spitfire dragged on, because it was necessary to solve the problems with sealing the cockpit and its defrosting. Spitfire HF Mk.VI was first deployed in April 1942, at 616. RAF squadrons and in July of the same year he got into service 124. squadrons. They were deployed, for example, above the naval base in Scapa Flow. They did not leave Great Britain, except for 5 - 6 machines sent to the Middle East.

Spitfire HF Mk.VI was certainly a good altitude aircraft, guaranteed good maneuverability at high altitudes, the pilot at these altitudes at these altitudes thanks to the pressurized cabin safe and comfortable for his time, but still could not fulfill the task for which he was created England, his maximum access was still not enough for them. Only deployment Spitfire Mk.IX (were deployed before HF Mk.VII) made a stop to their impunity. Production of the Spitfires HF Mk.VI was terminated by the 72nd built machine in October 1942. 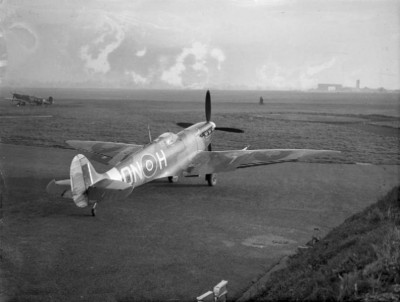 URL : https://www.armedconflicts.com/Supermarine-Spitfire-HF-Mk-VI-t35381#538326Version : 0
Aubi MOD 5 years ago
Three-dimensional sketch of this height version, it is worth noting the typical "five" coolers under the wings. 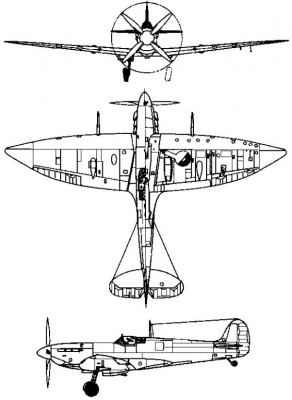