Heroine of the Russian Federation

She was born on 05.05.1922 in the village of Petrušino in the Ryazan region. Her father was a peasant who became the founder of the local collective farm and, after studying at the Moscow Pedagogical Institute, a teacher. Gradually, he worked his way up to the principal of the local school. The daughter followed in his footsteps and in 1939, after graduating from high school, she began working as a history teacher. A year later, she was accepted to the Moscow State Pedagogical Institute, where she began studying at the Faculty of History. At the same time, she completed nursing courses.

At the beginning of the war, she left as a volunteer with other students to build defensive positions in Mozhaysk. In October 1941, while the enemy was standing at the gates of Moscow, she responded to the call M. Raskové to the Air Force. She graduated from aviation school in Engels and in the spring of 1942 was assigned to 588. Light Bomber Night Women's Air Regiment at Southern Front, later 46. GvNBAP. She longed to fly, but the order was different, so she worked as a mechanic-armourer. It was not until March 1943 that she got into flying, when she was assigned at the request of a light bomber gunner Po-2. From April 1943 to May 1945, it made 715 combat launches, on December 20, 1944, even 17 launches in a single day. She dropped a total of 94 tons of bombs on the enemy. She was awarded five times and promoted to the rank of st. lieutenant. In May 1945, she was nominated for the title of Heroes of the Soviet Union. The proposal was supported by the Commander of the Air Force Colonel General K.A. Versinin and Marshal Front Commander K.K. Rokossovskim, however, in Moscow still did not pass.

After the war, she was demobilized and completed her studies in Moscow. After defending her dissertation and associate professorship in 1952, she began teaching at the Moscow Aviation Institute, where she then spent forty years. She married war veteran T. S. Manajenkov, with whom she raised two daughters. In 1992, she retired as a candidate of historical sciences. On December 31, 1994, she was awarded the Golden Star of the Hero of the Russian Federation.

She died in Moscow on December 29, 2012, and is buried in the Trojekurov Cemetery ( Троекуровское кладбище) in Moscow. 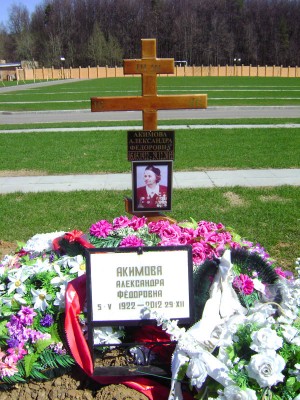 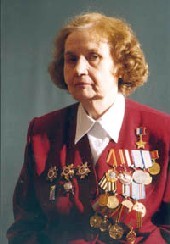 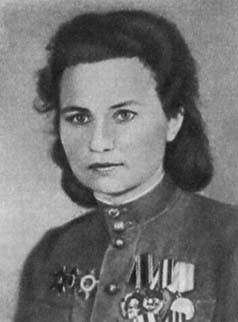