Dmitry Fyodorovich Ustinov (Дми́трий Фёдорович Усти́нов) was a Soviet politician, Marshal of the Soviet Union and from 1976 until his death Minister of Defense of the Soviet Union. In this position he was one of Brezhnev's closest collaborators and the most powerful personalities of the USSR. He was also the Hero of the Czechoslovak Socialist Republic and the holder of a number of high Soviet and foreign decorations.

He was born into the working-class family of Fyodor Sysojevič and Jefrosin'j Martynovna, had 3 more brothers, the eldest Petr was a member of the Social-Revolutionary (Communist) Party and a participant in the Civil War, died in 1938, his second brother, Ivan died in the Civil War in 1918 The third brother Nikolai was also a participant in the civil war.
Dmitry started working when he was 10 years old, during the Civil War his sick father went to Samarkand, where he died in 1922. In the years 1922-1923 he served as a volunteer in the Red Army with the 12th Turkestan Regiment, in whose ranks he participated in the fighting against the bass. After demobilization, he moved with his mother to the town of Makarev near Ivanovo-Voznesensk, where he worked as a fitter in a paper mill. Shortly afterwards - in 1925 - his mother also died.

In 1927 (at the age of 19) he joined the Communist Party. In the years 1929-1934 he studied at the Polytechnic in Ivanovo-Voznesensk, Moscow and Leningrad. He then worked as an engineer and later as a director in the "Bolshevik" armory in Leningrad.

When Nazi Germany invaded the Soviet Union in 1941, at the age of 33, Stalin[/url] appointed him to the post of People's Commissar (Minister) for armaments. From this position he was responsible for the massive evacuation of the defense industry from besieged Leningrad to the east beyond the Urals ( more than 80 military industrial enterprises were evacuated, employing more than 600,000 people), for which was first named Hero of Socialist Labor. He also played a key role in transferring the German war missile program to the Soviet Union, where it became the basis of Soviet cosmonautics.

In 1952 he became a member of the Central Committee of the CPSU. After Stalin's death in March 1953, the Ministry of Armaments was merged with the Ministry of Aviation Industry into the Ministry of Defense, and he himself remained at its head. Nikita Khrushchev highly valued his management skills, and therefore in 1957 he was appointed Deputy Prime Minister of the USSR and in 1963 head of the Supreme Council of the National Economy, the governing body of the decisive part of the Soviet Union. economy. On the occasion of Gagarin's historical flight in 1961, he was awarded the title Hero of Socialist Labor for the second time.

After the fall of Khrushchev and the takeover of power Leonid Brezhnev returned to the defense industry. In 1965, he became a Politburo candidate and secretary of the CPSU Central Committee for oversight of the armed forces, the defense industry, and some security forces. He was also in charge of developing the Air Force for strategic bombing and the intercontinental ballistic missile system. All these appointments strengthened his power, and when the Minister of Defense, Marshal Rodion Malinovsky, died in 1967, it was generally assumed that he would take his place. Instead, Marshal Andrej Grečko became the new Minister of Defense.

He became Minister of Defense only after Greček's death in 1976.On July 1 of the same year, he was promoted to the rank of Marshal of the Soviet Union, regardless of his minimal previous military career. The growing influence of the Soviet army gave him the role of a key figure in the Kremlin; his support secured Andropov's succession to Brezhnev, and he himself maintained his influence under Chernenko.

In 1992, Russian President Boris Yeltsin published five top-secret documents from the end of 1983 dating from the weeks following the downing of Korean Air 007. According to them, the Soviet Union managed to find a black lock the downed plane and decipher its records. Subsequently, together with the head of the KGB Chebrikov, Ustinov advised Andropov not to disclose these facts, because the content of the recording did not support the Soviet claim that KAL 007 was on an American spy mission.

In the light of the above, it seems highly desirable not to hand over the on-board recorders to the International Civil Aviation Organization (ICAO) or to any third party willing to decipher their contents. The fact that the recorders are in the possession of the USSR must remain a mystery. As far as we know, neither the US nor Japan have any information about on-board recorders. We have taken the necessary steps to prevent any disclosure of information in the future.
—Memorandum No. 5

At the end of October 1984, he contracted pneumonia. He did not take part in the traditional military parade on the occasion of the anniversary of the VRSR on November 7, where he was represented by the First Deputy Minister of Defense Marshal Sergei Leonidovich Sokolov. He underwent surgery to correct the aneurysm in the aortic valve, but his liver and kidneys deteriorated and eventually died of cardiac arrest. He was buried at the Kremlin wall on December 24.

After his death, the city Izhevsk was renamed after him, but under Gorbachev it returned to its original name.

The Russian cruiser Marshal Ustinov is named after him.

In his memoirs, he described Mikhail Gorbachev Ustinov as an energetic and friendly man. When Gorbachev faced opposition in the Politburo after Andropov's death, Ustinov advised him to stay strong and gain courage.

Colonel-General Igor Illarinov, who had been Ustinov's aide for 30 years, described him as "the greatest Stalinist of all the commissioners". Illarionov also said of Ustinov that, like his other peers, he was shaped by the experiences of the Great Patriotic War. Illarionov himself described him as a man who was very passionate about his work, often working late into the night and sleeping only a few hours a day.

"I first met him thanks to Andropov, who was his close friend. From the first moment I liked his determination, quick decisions, optimism, enthusiasm and expertise combined with a certain simplicity and openness. In my mind he represented the best representative of the so-called The system of command and control that defeated the Germans in World War 2. I think his only mistake, which he did not realize, was the Afghan war. I'm Andropov, he was confused and nervous about the Afghan war. I believe he fully understood his mistake. However, Ustinov was still calm and apparently convinced he was right. "

From the memoirs of V. G. Repin, chief designer of the early warning and space warning system:
"Dmitry Fyodorovich did not hesitate to study in the highest positions and insisted that his subordinates study as well.Although he was already Minister of Defense, he ordered me to read to him and the Council of Ministers a series of lessons on the principles of building a comprehensive strategic information system, methods for ensuring the highest reliability of strategic information, modern and promising techniques of importance, algorithmic and software interconnection. He was the most active listener of these lessons and in my opinion, even in my absence he gave his closest subordinates something like tests. "

N. G. Egorychev:
... Ustinov focused on the defense industry and was not interested in helping his country's economy. He contributed greatly to the victory over fascism, but on the other hand, I think he caused damage to our economy when his administration did not spare Brezhnev's leadership on defense, not even on the welfare of the working people.

Marshal of Artillery Nikolai Dmitrijevich Yakovlev:
... Especially I < ... > I remember the young 33-year-old People's Armament Commissioner Dmitry Fyodorovich Ustinov ... I have no idea when he went to bed, he gave the impression that he was constantly awake. He was characterized by constant zeal and the greatest forbearance towards people.

In the post of People's Armament Commissioner, Ustinov proved to be an excellent engineer, a deep expert and a skilled production organizer. He was a supporter of quick and bold solutions, he thoroughly understood the most difficult technical problems. In addition, he did not lose his human qualities for a minute.

Ustinov's reluctance to support any reforms, even those agreed by the Politburo itself, led to frequent clashes with the Chief of General Staff, Marshal Nikolai Ogarkov. Ogarkov and many other officers of the General Staff hated Ustinov's influence over Brezhnev, seeing it as a conflict of interest between the defense industry and the army. This was a problem for Ogarkov, as he was more inclined to reduce the massive Soviet weapons arsenal into a more compact offensive force that combined state-of-the-art conventional weapons and focused on special forces operations.

Ustinov, on the other hand ( despite his lobbying for the defense industry), favored the usual emphasis on brute force and nuclear intimidation in order to maintain his strategy of "high-intensity non-nuclear conflict", despite the lack of efficiency that has emerged in Afghanistan. In light of this, although Ustinov has drastically increased the technological capabilities of the Soviet Armed Forces, most progress has been made in the area of strategic nuclear weapons, such as Typhoon-class submarines, Tu-160 bomber and SS-20 Saber missile.

He was married to Taisha Alexejevna Briekalova-Ustinov (1903-1975) with whom he had 2 children, a daughter Věra Dmitrijovna Ustinovova and a son Nikolai Dmitrijovič Ustinov (1931-1992). He also had a granddaughter, Nosta Nemcova. 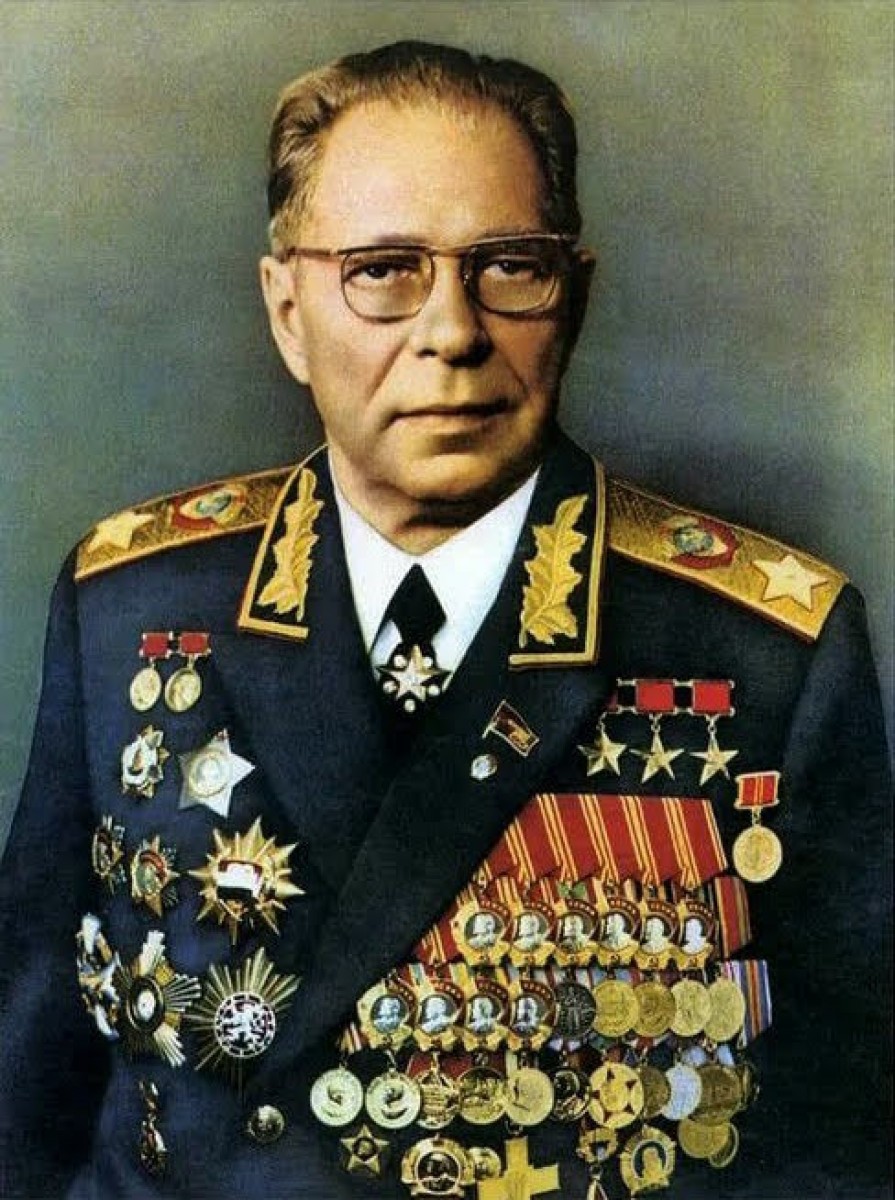 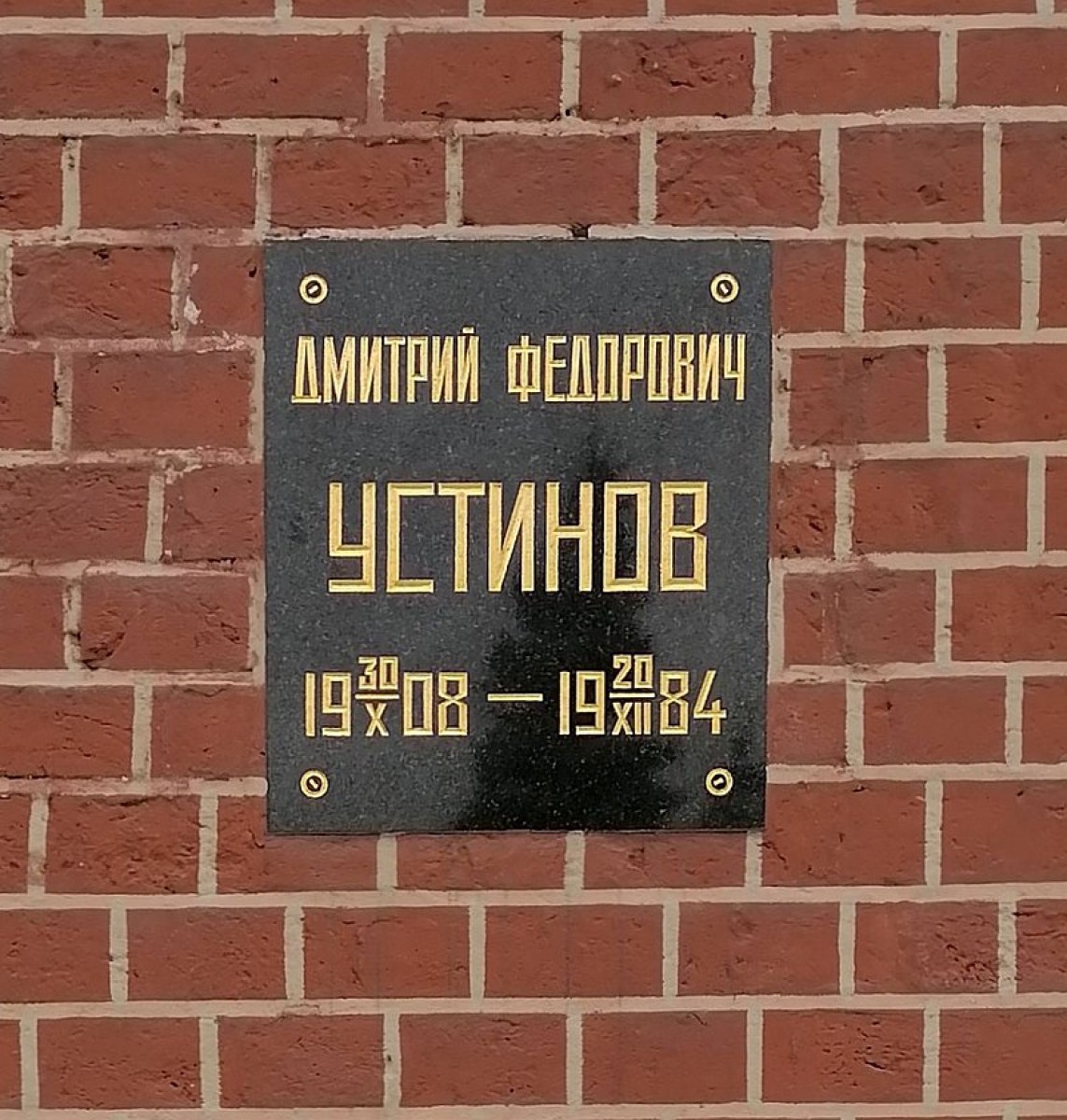 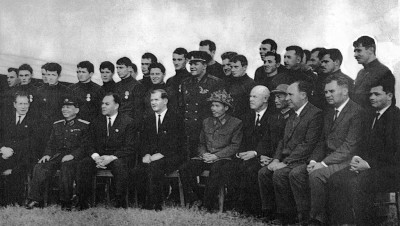 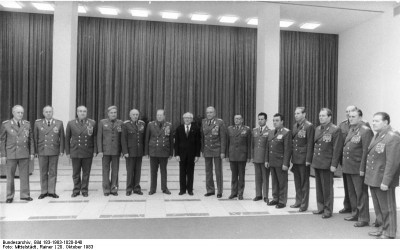 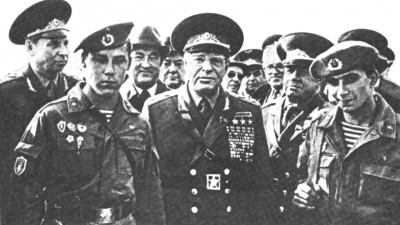 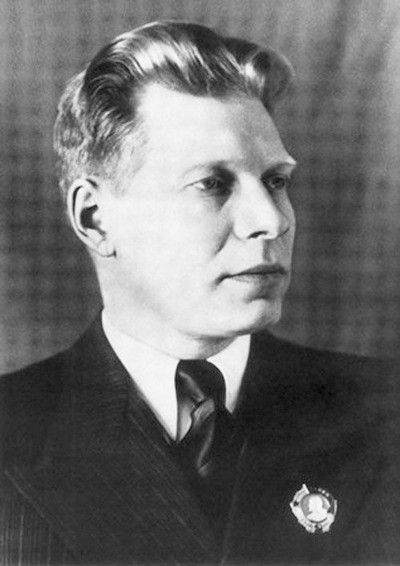 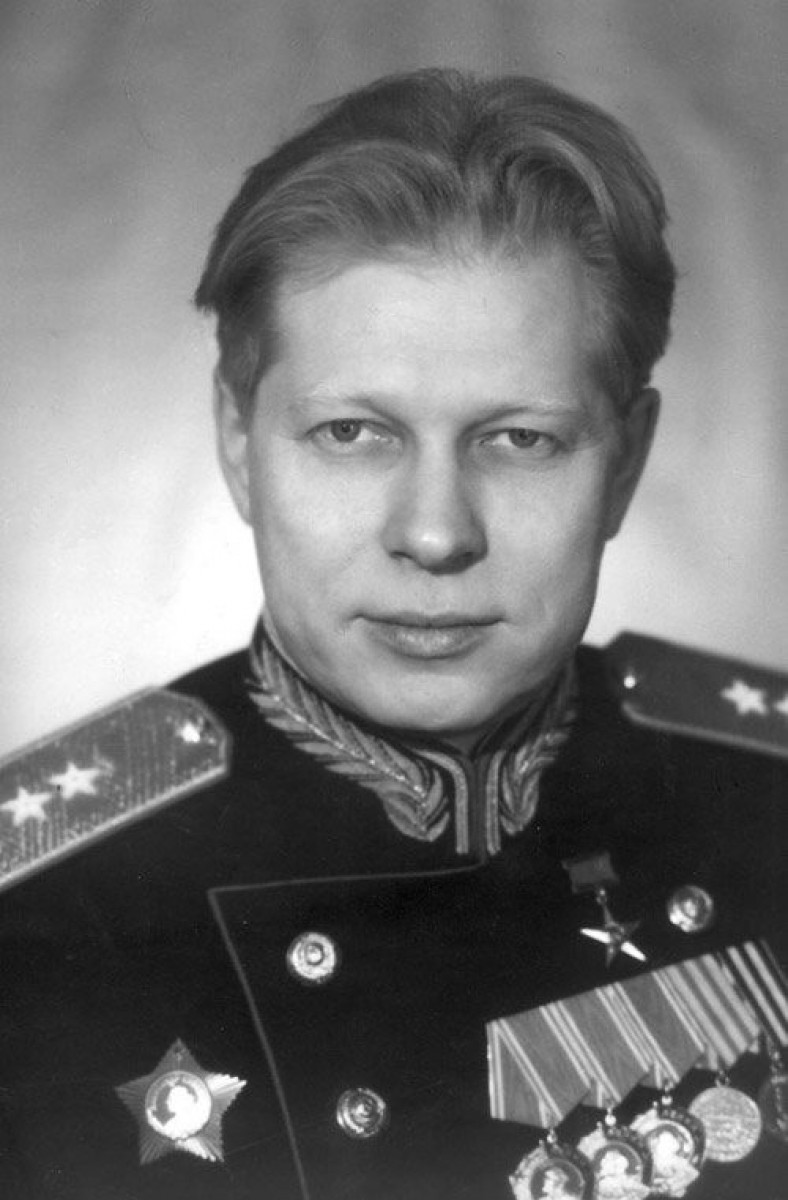 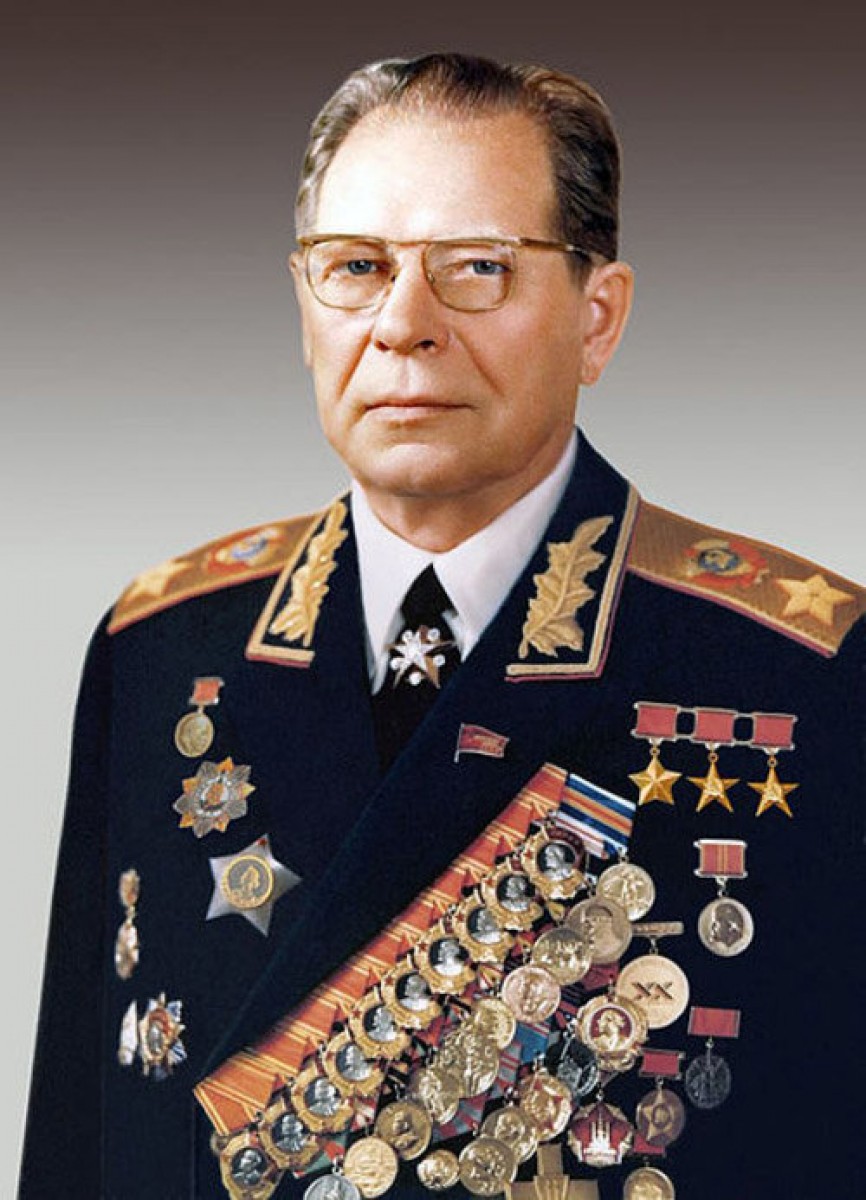 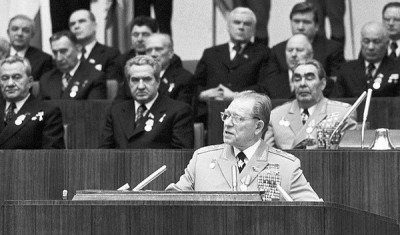 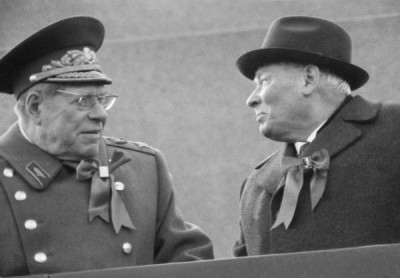 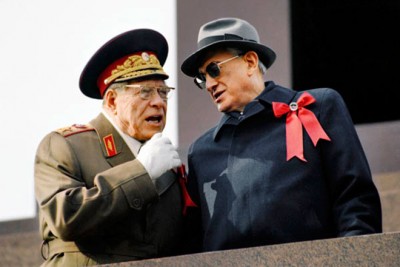 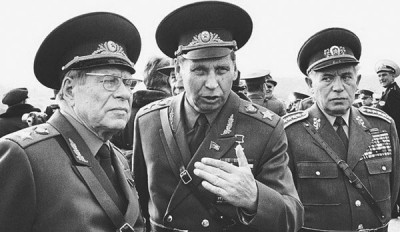