URL : https://www.valka.cz/Churchill-AVRE-t40029#38566Version : 0
Admin MOD 19 years ago
Immediately after the bitter disappointment of the disaster operation Jubilee (the raid on the Dieppe) in August 1942, began in the allied teams evaluation of the causes of the failure of this "testing of the invasion of Europe", as the operation was later historians referred to.
As one of the causes of its failure was marked by the inability of the units to overcome or directly destroying the offshore installations and obstacles, and the related failure to develop the operation towards the interior.
This awareness of the need to include in the report of the first, and a few other offensive waves of the members of the ženijních units with the necessary equipment and armament, able to meet a very wide range of tasks under immediate fire to prevent the enemy could later rise to a number of specialized ženijních vehicles, called the AVRE (Armoured or Assault Vehicle Royal Engineers). The driving force of the development of special equipment for the vehicles of the Churchill AVRE, it is possible to consider the canadian engineer lieutenant Denovana (do not forget that the hardest loss nepodařeného attack against the Dieppe bore Canadians).
This vehicle was designed on the chassis of the older infantry tanks Churchill III and Churchill IV and along with other special types, for example, on tanks Sherman or Centaur was popularly known as Hobart's Funnies (Hobartovy toys, quirks or srandičky) according to the commander of the 79. armored division [/b]royal British armed forces. It is in this volume that had the emblem of a bull's head, specifically in the 1st Assault Brigade was concentrated the vast majority of these special vehicles.

Here is an approximate list of the tasks for which they have been Churchilly AVRE constructed:
- transportation (basic) for teams of five Royal Engineers with all the materials, equipment and extra ženijním náloživem to the area of implementation of the qualification and the subsequent task and providing them with direct coverage (and at least hiding) in the course of the performance of these tasks (when laying bombs, mine clearance, etc)
- destruction of the defense of the objects of the opponent with an emphasis on zodolněné firing objects (the fortified posts in the firing lines means)
- the destruction or creation of the passes through the natural obstacles (ditches, waterways, landscaping grades) or artificial barriers to the character of the nevýbušných barricades (coastal walls, anti-tank ditches, including their bridging
- mine action, creating and marking passages in mine fields
- strengthening of roads and the creation of the passes in a few únosném the field (in the sand and on the podmáčeném terrain)
These tasks have been adapted to both the armament and the equipment inside, so vezená and návěsná device AVRE tanks.

For the main armament (virtually everyone) Churchillu AVRE, it is possible to mark the thrower demolition bombs (in principle Spigot Mortar - čepový mortar) Bangers caliber 290 mm, lafetovaný on the tower of the tank.
The gun was able to throw missiles (popularly called the Flying Dustbin - "flying dustbin") on the weight of approximately 18 kg (16 kg own load) at a distance of up to 80 m, rychlostí shooting 2-3 shots per minute.
Zbraň not nabíjena from the inside of the tower as a normal tank cannon, but from the outside, from the place of the charger sitting in the truck bed to the left of the habitat of the driver of the vehicle. Charger after the displacement of its příklopu he downed a barrel of a thrower on a horizontal pivot in the upward direction and from the bottom to her slipped a bullet/load, then once again dropped his gun, and thus closed. Forehead charges was practically in the level of the barrel thrower. The gun was focused and odpalována on a goal from inside the tower.

Churchilly AVRE were equipped with a universal mounting features and according to the above-specified tasks on them could be installed the following equipment:

• for mine clearance and the creation of the passes in the mine blocks
- CIRD equipment of the Canadian Indestructible Roller Device, přivádějícím mines to explode the pressure of the cylinder
- Bullshorn with mine vyorávačem
- Jeffries plough with mine vyorávačem

All devices, developed for the tanks the Churchill AVRE it may be practically regarded as a device of "single use", therefore, were their anchor elements constructed with the possibility of their pyrotechnic disconnection, the device was either in the event of damage to or immediately after the completion of the task as a rule odhozena and the vehicle continued in the further execution of the tasks without them.
It cannot be excluded that the above-mentioned review of the equipment is not complete and it is necessary to realize that not all of the above-described návěsná equipment in the course of the tests proved to be effective and in any case it cannot be argued that, during the allied campaign in Europe used.
In any case, however, the the use of tanks Churchill AVRE as in the course of the fighting immediately after the "D-Day", so later on in the interior of , proved the concept vehicle , such as and after the war was a series developed further in types of Centurion AVRE and the Chieftain AVRE with the possibility pegged a variety of specialized facilities.

The attached photos are captured tanks Churchill AVRE with some of the above-described návěsných device.....


URL : https://www.valka.cz/Churchill-AVRE-t40029#152942Version : 0
palič 17 years ago
A pile of grate, carried on the hull of the Churchill tank, was supposed to help overcome anti-tank walls and ditches, riverbeds or simply to fill large holes in the roads. Engineer units used especially older versions of Churchill, for example version Mk.IV, which will probably be the case with the machine shown, judging by the rectangular side cover.

[img:aaaaaa] https://galerie.valka.cz/data/347/medium/IMG_0922.jpg[/img:aaaaaa ]
URL : https://www.valka.cz/Churchill-AVRE-t40029#38585Version : 0
Scotty 19 years ago
In other words, in the photo above it is a Churchill AVRE Fascine Carrier (AVRE = Armored Vehicle Royal Engineers, sometimes referred to as Assault Vehicle ...).
Although not visible, the vehicle in the previous picture is armed with a 290 mm caliber weapon called Petard (the principle of operation was the Spigot Mortar), which fired charges called Flying Dustbin ("flying trash can").


URL : https://www.valka.cz/Churchill-AVRE-t40029#152847Version : 0
palič 17 years ago
Churchill AVRE, Bovington Tank Museum, 2008. After the end of the 2. world war ii was a tank used as a reference point on a military shooting range. Of the total of the wreck was then reconstructed into a fully functional state. The machine is now exposed in the coloration of the vehicle from the assembly 79. armored division. (©Radek Havelka) 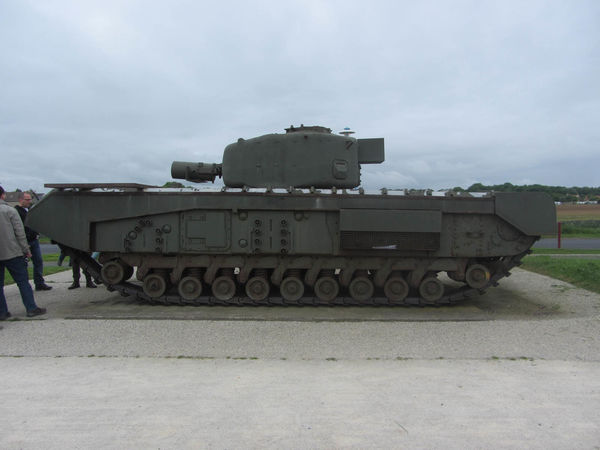 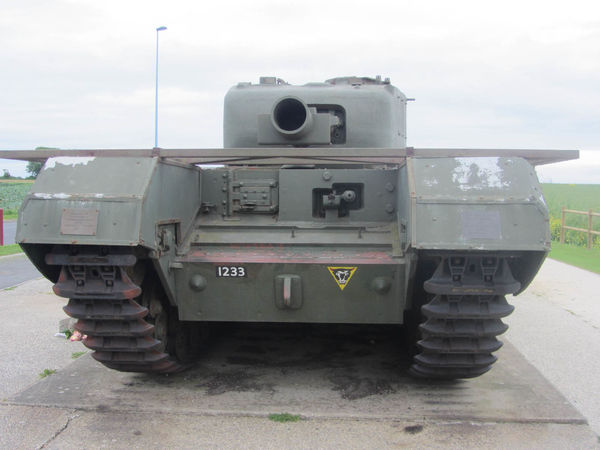 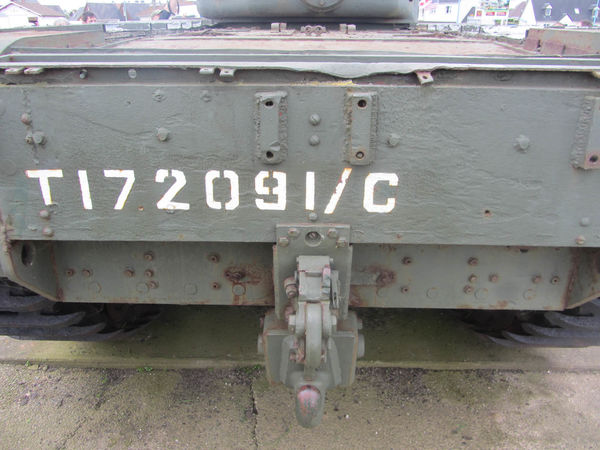 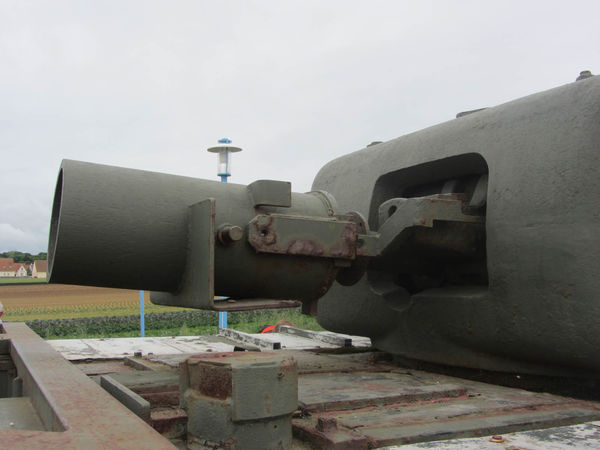 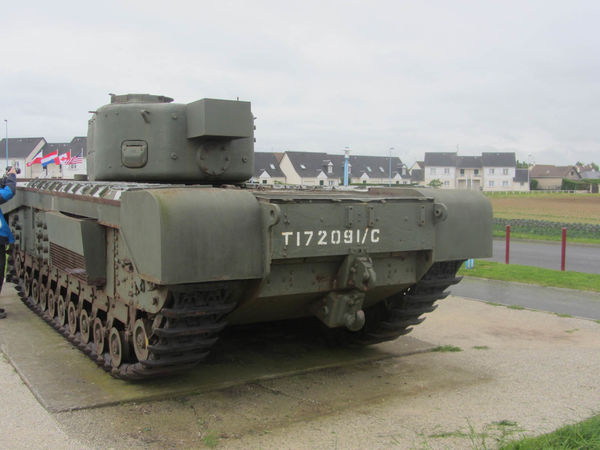 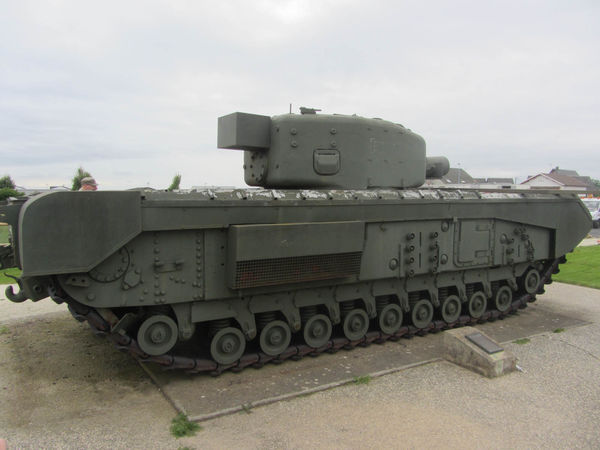 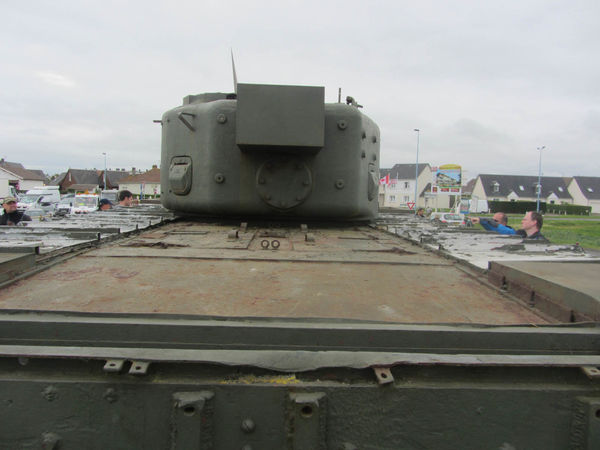 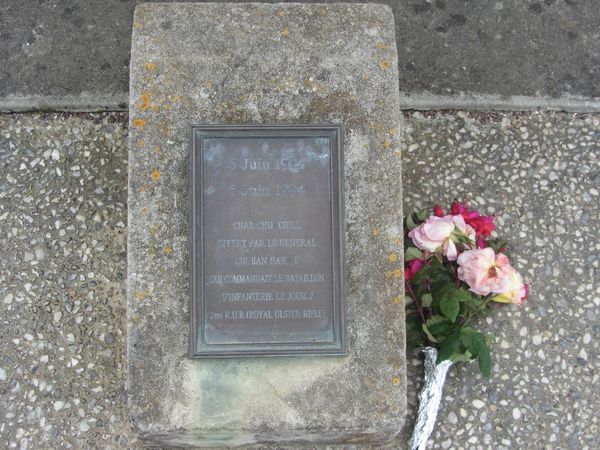