Interest in airborne forces can be traced at least since 1917. Formations of the airborne troops, dropped on parachutes, they could be planted even in areas difficult to reach common ground troops and also bypassing the fortifications, the implementation of the survey or fending off an attack from in time of the identified access roads. In addition, the potential withdrawal of paratroopers anywhere on the battlefield compels the enemy to allocate forces to defend against a possible landing party, and so to weaken the troops. However, for such benefits is obliged to pay the firepower, which is much smaller compared to the army, and an extreme dependence on supply from the outside and, as a result, inability to support their own combat readiness.

In the years of the second world war with airborne troops apply for all its major participants, and in an effort to provide these components of a lot of firepower to create special equipment and armament.

In the years of the second world war with airborne troops apply for all its major participants, and in an effort to provide these components of a lot of firepower to create special equipment and armament. For example, as the artillery use of artillery systems, adapted for dropping from aircraft on parachutes: in the US it was the 75-mm towed howitzer M1A1, and in Germany 75-mm reliable gun 7.5 cm LG 40.

Paratroopers but they used modified or specially developed models of firearms. So with the Americans in the armament was a 7.62-mm carbine M1A1, and for the Japanese parachute folding military rifle type 2. Apart from the equipment manually and artillery armament of airborne troops felt a serious lack in the equipment of the armoured technique. Therefore, in each of these countries there were projects of a tank for paratroopers. The main problem was in the common transport tanks and troops on the battlefield. We can therefore see almost a parallel development with very similar results - the Antonov A-40 (KT, Wing tank) (USSR), Raul Hefner Rolabuggy and Rotatank (United Kingdom), Baynes Bat (Great Britain), John Walter Christi M1932 (USA)

The requirements to develop a tank for airborne troops appeared, even for the Japanese. In the years of the second world war in Japan commanders were as in the imperial army army - tejsin sjudan ((挺進集団)), and in the imperial fleet - kajgun kutej (海軍空挺). For the first time were the army and naval sections planted in 1942 during the fighting in the Dutch East-India. Unlike Germans, Britons and Americans, however the Japanese nevybavovali their paratroops značnějším amount of specialized heavy weaponry. It is possible that it was triggered by the japanese paratroopers were rarely deployed according to your destination. Instead, they were mostly used in the role of light infantry, such as, for example, the German "padákoví hunters". However, in the imperial army and the imperial fleet were being considered by the way to increase the combat power of the airborne troops and one of these projects was the project of the tank, which could alone bring to the battlefield on the wings.

Tank So-Ra company Mitsubishi was, in essence, little tank, the weight of which, even with a crew of two persons (the mechanic-the driver/pilot and the commander/gunner) amounted to 2812 kg. The tower was located behind the mechanic-the driver/pilot whose cabin was fitted with three large holes, with lifting door, ensuring to some extent the view when landing. Information about armoring are not available, estimates are based on analogy with similar japanese light tanks. Pancéř likely to exceed the 6-12-mm thickness of the armour of the light tank type 95 Ha-Go, which later was used by the japanese airborne troops.

For a tank So-Ra were designed three variants of equipment:
• - The 37-mm cannon (for example, 37-mm gun type 94 used on the tank Ha-Go)
• the - machine-gun armament (either a light weight of 7.7-mm machine gun, or some harder),
• - the flamethrower.
The power unit should be formed by the air-cooled engine with a power of 50 pcs, which according to calculations should allow for the tank So-Ra to develop the maximum speed on highway 42 km/h.

Kluzáková part - Maeda Ku-6 - is interpreted at least two ways, since the original project is not yet known - project documentation either not survived the war, or has not yet been found.

The first (probably older) version presents the idea of the beam tail surfaces, mounted to the rear of the tank and the wings, fastened to the hull So - Ra on both sides of the tower. In this version have GTC installed on the top part of the SOP. The mechanic-the driver/pilot handled the control surfaces with the help of ropes, the stretching of the tank. In the frontal part of the hull of the tank was placed eye fastening of the towing rope.
The second version of the So-Ra was equipped with stands, located on both sides of the torso. To the upper parts of the uprights was attached to the wing, with which were also connected by two beams. The rear parts of the beams were equipped with a vertical tail surfaces and connected to each other low stored horizontal tail surfaces. Basically in this option, So-Ra had to be placed under the wing.

When landing, the tank had to drop the wings and do it together with the paratroopers.

In rokce 1945 was Ku - 6 is completed, and the company Mitsubishi has produced the model So –Ra in 1 : 1 scale. In the course of a short time have been carried out flight tests, during which, as expected, it was used mock-up, loaded to the weight 2812 kg, so that mimicked the weight of the actual tank So-Ra. As the towing machine was used bomber Mitsubishi Ki-21. Tests soon showed the problems of the concept: in the Kuro-Sha were serious problems with the ovládatelností in-flight, the mechanic-the driver/pilot had insufficient views, and the landing was extremely hard.

Another problem was that So-Ra couldn't resist the heavier and stronger tanks. Any potential benefit Ku-6 decreased to a minimum with the advent of the glider Kokusai Ku-7 Manazuru (真鶴 - Crane, allied codename "Buzzard"), whose construction was started in the year 1942, and whose first flight took place in August 1944. The load capacity of the glider Ku-7 was 7257 kg and the dimensions of the fuselage to allow placed inside a light tank Ha-Go, the weight of which amounted to 6713 kg. In connection with obvious problems Kuro-Sha was the directive of the imperial army approved the decision to stop work on this proposal and focus on Ku-7. 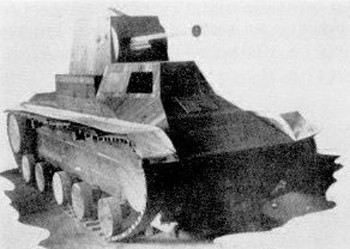 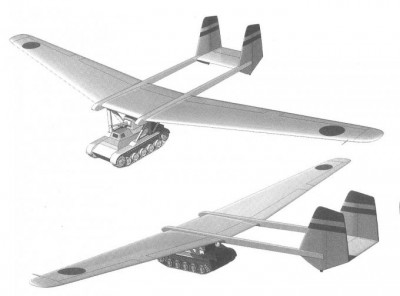 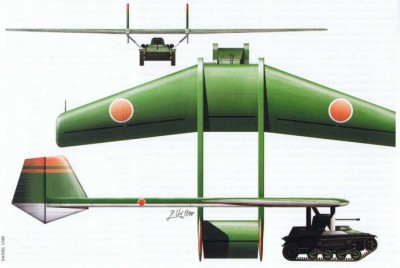