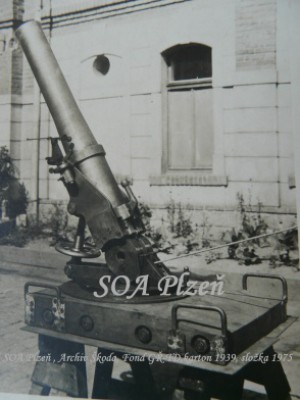 Weapon system Damage, produced in the year 1918 Škodovými races, a public limited company in Pilsen (the designation 14cm Minenwerfer M.18) and in the years 1919-1920 joint Stock company, formerly Škodovými races in Pilsen. The weapon was formed four transport units (barrel, mortar bed, sights, mat), the transport is carried out either after the two units on the kárách towed by a horse or nesením service in an unfolded state. Mortar was equipped with a rifled barrel, was charged from behind and to shoot use the coarse mines vz. 18 × 14 cm. If mortar is distributed only on the two units was the mortar is transported on the kárkách vz. 34. The domestic customer of nearly 250 weapons, which were incorporated in the state of Minometného regiment 351, later were located in the warehouses of each separate artillery divisions.