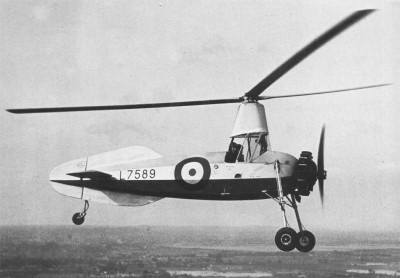 C.40 was an observation and multi-purpose autogyro, developed by engineer of Spanish origin Juan de la Cierva - the last in the development of which he participated before his death in a plane crash in December 1936. Back in 1934 he began working on the so-called autodynamic rotor. Before starting, this rotor would be spun at high speed with the blades in a horizontal position, so that after reaching a certain speed, they would automatically rotate to the angle of attack needed to obtain buoyancy. The gyroplane then literally jumped up a few meters, without the otherwise necessary classic start. Ropes were usually used for spinning, but work was also done on an automatically detachable gear from the engine.

In 1936, the modified rotor system was tested on one machine C.30 and then on C.30A. This modified rotor, sometimes also referred to as the C.30R, required long-term tuning because the rotor suffered from vibrations. Finally, a modified and simplified autodynamic rotor was applied to the serial gyroscope C.40. It was visibly based on C.30A, but had a substantially redesigned chassis, enlarged tail areas and the horizontal tail surfaces lost their raised ends. The cabin also changed significantly because it was placed under the pylon carrying the rotor and its front part was glazed, with two seats next to each other. A French Salmson 9Ng star engine was used for propulsion, driving a wooden double-bladed propeller in a traction arrangement.

The C.40 prototype was tested in 1938, after the death of its author. According to tests, the new rotorcraft had much better properties than C.30, takeoff and landing was now almost vertical. Serial production of most parts for the C.40 took place in a small company Oddie, Bradbury & Cull, the final assembly was carried out by British Aircraft Manufacturing Co. Ltd. However, only nine machines were built, seven of which were ordered in 1937 for the RAF. The original order was for seven machines, but the two machines were kept by Cierva Autogiro Co. (which, by the way, did not produce autogyros, instead worked on the development of rotors and sold the license rights to almost a dozen different companies that actually built autogyros) for further development, and the Air Force therefore received two additionally manufactured ones. From the very beginning of the construction, the possible interest of the army was taken into account, so the machine was developed according to the specifications of 2/36, prepared by the RAF for a possible rotorcraft replacing the Avro Rota.

Originally, C.40, which was (perhaps) assigned the designation Company II, was to replace Company I, but this did not happen and served side by side. Five C.40s were handed over to the Air Force in the first half of 1939, the remaining two by the end of the year. During the war, they served as staff liaison between the fighter headquarters and the coastal headquarters and as training, sometimes to calibrate the radar. Two to three planes were reportedly sent to British expeditionary forces in France, where at least one of them was also abandoned. One autogyro would be scrapped after an accident in January 1941, two were dismantled for spare parts in the fall of that year. The last two C.40 survived until September 1944, when they were discarded as obsolete, partly due to lack of spare parts for their maintenance, partly due to the arrival of the first real helicopters, Sikorsky R-4 Hoverfly. 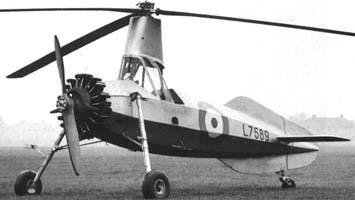