In September 1926, shortly after the destruction of an experimental seaplane Kaiba Ginkai KB, adopted the voluntary committee of the Kaibo Gikai decision to build another large seaplane. The new seaplane was to be built on the basis of a completely new design. This construction had several objectives, both the designers and the technicians had to gain experience with the design and construction of all-metal flying boats, and on maritime pilots and mechanics could acquaint with all-metal aircraft in operation, mainly with the differences in maintenance and operating instructions.


On the construction of the work together naval and civilian engineers, which was led by Dr. Aikichi Tanakadate and Narihisa Yokota, he was the chief designer, naval air force supervised the naval lieutenant engineer Yoshio Hashiguchi. The designers used the experience gained during the construction of the seaplane Kaiba Ginkai KB, Dornierova Walu and also the experience gained in the German factory of Rohrbach, where they were some japanese specialists on the intern.
The new aircraft was from April 1927 to August 1928 built in the shipyards of Kawasaki in Kobe, was designated as an Experimental flying boat Gyiu no. 3 (Experimental Giyu Well.3 Flying-boat) and featured at the time the largest japanese plane. Drive put two on-line monitoring of the stored fork-engines of the BMW VI with the power of 500 horses, which the motorcycle department of the Kawasaki under license produced. The performance of the engine first, carry forward the dvoulisté wooden propellers, which were later, already during the tests, replaced by čtyřlistými propellers metal. These propellers were subsequently exchanged for wooden dvoulisté, because there was concern about the possible destruction of the metal propeller.


After the completion of the was the flying boat was transported to the base in Jokosuce, where they were immediately launched test flights. During the intensive six-month testing, it was found that the hydroplane has a very good performance, but large flaws revealed on the choppy water surface. The aircraft was also for the whole period of tests, accompanied by strong vibration of the engines, this vibration led to the fact that the engines could not achieve the full performance and the tests were strongly limited. The vibration of the engines they tried to remove the engineers in the maritime arsenal in Hiru, the aircraft was again tested with metal and wooden propellers, but it was done already only a few flights at low altitude.


In may of the year 1931 was a seaplane in Hiru disassembled, and all disassembled parts have been subjected to a thorough inspection, during which it was monitored by their wear and fatigue of the material. 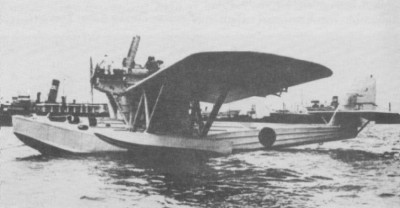 URL : https://www.valka.cz/Experimentalni-letajici-clun-Giju-c-3-t50713#194494Version : 0
Vláďa MOD 15 years ago
It looks like the corporate designation sounded Kawasaki KDN-1, or (according to the japanese wiki) KDN-2. 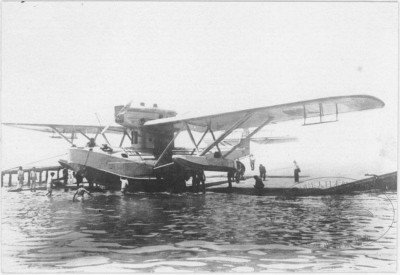 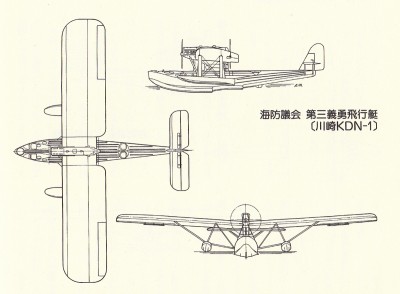