The grenade was developed by captain R.With. Gammonem of the 1st Parachute Regiment as a replacement not too reliable grenade Well. 74. The purpose was to give a paratroop and special forces an effective and reliable weapon to be used against both armored targets and buildings against enemy infantry. Unlike conventional shells is used here canvas bag that attached to the metal cone in which it is established the standard fuse (the same as for the shell Well. 69). Into a canvas bag is then before the event is inserted a charge of explosives (usually plastic or TNT) in the volume and weight according to the anticipated goals. Against infantry it is usually used less explosives and the bag is completed with metal fragments (you can also use glass, the stove and under.) that increase the effect against the living force. Against vehicles it is on the contrary used a larger payload (up to 900 grams) which in the case of stubborn targets, such as tanks used to damage the belts, the engine or turret rotation. Against pevnůstkám and buildings can even be used as a time fuse with a time delay of 4 – 7 seconds. The advantage is that a soldier can carry more easily unfulfilled grenades and explosives that is used for diversionary action to use as their filling. The fuse is covered prior to parturition plastic cap, after unscrewing appears canvas tape závažíčkem at the end, the weights must be prior to parturition hold to prevent premature unlatch. After dumping, the tape is unwound using weights, and thus releases the pin and detonates the fuse during flight, upon impact the grenade will explode. The grenade was primarily designed for paratroopers and special units, but they were armed and agents vysazovaní into the occupied territory and apparently a resistance group. Used was and american airborne forces operating from the territory of the Kingdom. After its designer was a grenade often called also "Gammon Bomb", another name then was "Bean Bag" in the bag that resembled a bag of the beans. A grenade was introduced into service in may 1943. The tests were but I guess I'm older, a similar grenade was reportedly just the "bomb" that was ejected on the car R. Heydrich (the away team started already in December 1941).

the photos are from my archive (my own photo). 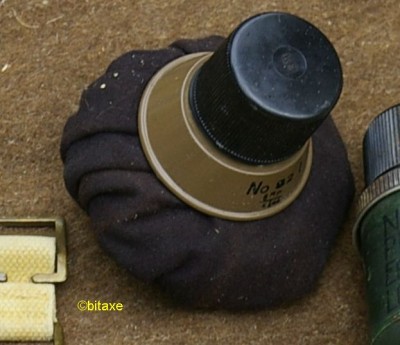