At the beginning of World War II, tanks fully demonstrated their qualities and at the same time revealed large gaps in defense against them. For this reason, they began to work in the US on the means of anti-tank combat. One of the possibilities was the construction of tank destroyers, able to conduct effective anti-tank fire and at the same time maintain mobility. One of the variants in the development was the next tank destroyer.

Despite the obvious shortcomings of the design of the transporter M3, which was not built for possible tank combat, more serious was the complete absence of similar armaments. Therefore, the construction of this tank destroyer was approached as a time-limited measure until the creation of a full-fledged tank destroyer.

In June 1941, a special modification of the 75 mm cannon was placed on the M3 chassis M1897A4. Given that the cannon was a copy of a French field cannon from the time of the First World War, so not only the chassis, but also the cannon was basically an emergency solution. But here decided a large number of parts in the warehouse, which could be quickly adapted for use on a given chassis. This created a prototype tank destroyer, called the T12 GMC.

Modifications were made to the M3 chassis, which allowed the placement of the cannon. The fuel tanks were moved to the rear of the vehicle, and the windows were removed from the cabs to prevent them from shattering during the shot. The cannon was able to measure in the range of 19 ° left and 21 ° right and elevation in the range of -10 ° to 29 °. The operator of the cannon was protected from small arms fire and shards of armor shield with a thickness of 15.9 mm.

The chassis armor was 6.4 mm thick. The drive was provided by a six-cylinder four-stroke White 160AX petrol engine, which made it possible to reach speeds on the road of up to 72 km/h. Based on the performed military tests, the T12 was accepted into service in October 1941 as the M3 GMC.

Before serial production began, pre-series machines were deployed in the Philippines against advancing Japanese troops. In the combat deployment, insufficient protection of the crew from the effects of small arms fire was demonstrated. This problem was solved in the spring of 1942, when the armor was modified to provide some protection from above.

During production, the stocks of cannons on the M2A3 wheeled carriage, which were needed for conversion to the M3 carriage, were exhausted. However, there were still stocks of older M2A2 carriages, from which the M5 carriage was derived. The new M5 tank destroyer was named M3A1 GMC. From an external point of view, it was practically no different from the previous modification. 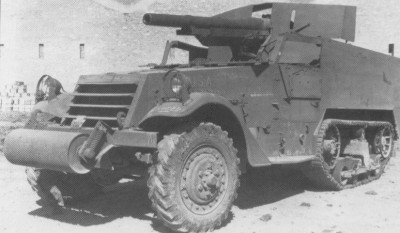