History
The United States was rapidly awakening to the effects of the war, and while trying to maintain neutrality, the Navy, for example, was aware of the dire fact that German submarines were operating in the Atlantic on the border of American territorial waters. The Naval Air Force did not have in its arsenal suitable patrol aircraft with great endurance of flight. Such aircraft would be needed in the Pacific as well, and tensions were rising every day. The need for these patrol aircraft resulted in June 29, 1940 in the order of a prototype of a large long-range patrol flying boat at Boeing, the prototype was designated XPBB-1.

Seattle's Boeing company quickly embarked on a project and later on the construction of a prototype. The project was factory designated the Boeing 344, the largest twin-engine flying boat ever built. Wings with a semi-laminar profile were attached to the massive fuselage. On these slender wings were power units, two two-star eighteen-cylinder Wright R-3350-6 Double Cyclone engines. The extreme range of the flying boat was conditioned by a large amount of fuel, it was carried in the hull tanks with a respectable volume of 36,245 l. pum. This large machine was defended by three double half-inch Browning machine guns and two single. The turrets were on the bow, on the back and stern of the fuselage and in the teardrop-shaped side shooting ranges. The robust fuselage also allowed the crew to rest, because the flight was expected to last up to seventy-two hours, and during such a long time, the crew had to take turns. The first takeoff took place on July 9, 1942, and very good flight characteristics were found at the beginning of the tests.

Shortly after ordering the prototype, the Navy expanded its order with another 57 aircraft of this type, which was meanwhile named Sea Ranger. The need for long-range patrol bombers increased as the United States entered the war with Japan. The Japanese took full advantage of the surprise and occupied one island after another. PBB-1 aircraft were considered as an effective weapon against the Japanese advance, they had to operate from specially adapted ships, which were to be moored off the Aulet Islands, giant flying boats were to be ejected by rocket sledges. It was also planned to start from the giant shelters, which were to be built on the remaining islands. Based on this order, Boeing decided to build a new production plant in Renton (Washington state) on the shores of Lake Washington. The construction of this plant was financed by the government. However, during the flight, the war situation changed, the Japanese were stopped in their advance through the Pacific, and the United States was slowly gaining initiative. In the meantime, the tasks for which the PBB-1 was built were taken over by multi-engine long-range aircraft that took off from ground bases. The US Navy canceled its order and the plant in Renton was handed over to the US Air Force (USAAF), which needed production capacity to build bombers B-29 Superfortress. It is also interesting that the outer parts of the wings of the B-29 were taken almost unchanged from the XPBB-1.

But let's go back to the existing prototype, which was tested at Naval Air Station in Patuxent River (Maryland). The flight characteristics were said to be so excellent that its production by another company was considered. The tests gained momentum so that their results could be used for the possible construction of a giant flying boat Martin Mars. From January 1944 to the end of August of this year, the XPBB-1 passed tests focused on climb and take-offs with overload, a little later the equipment was tested. After that, the Sea Ranger was used to train US Navy crews and various engines and devices were tested on it until 1947, when it was permanently grounded.
URL : https://www.valka.cz/Boeing-XPBB-1-Sea-Ranger-t58817#212468Version : 0
Vláďa MOD 15 years ago 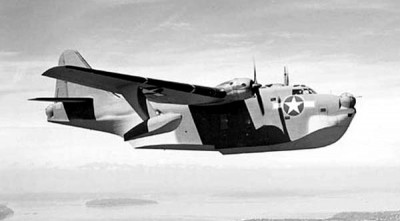