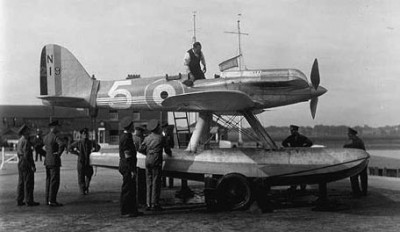 Reginald J. Mitchellafter the failure of the high-speed aircraft Supermarine S.4(the aircraft could not participate in the race for the Schneider Cup for strong wing vibrations) decided to make radical adjustments.

The new Supermarine S.5 aircraft was maximally aerodynamically improved, the frontal resistance was significantly reduced, the bearing area was reduced. In contrast to the all-wood construction of the S.4, the new S.5 had a fuselage designed as an all-metal shell.

In 1925, three models were built, these models resembled Supermarine S.4 and Gloster III, the models were blown in the wind tunnels of the Royal Aircraft Establishment and the National Physical Laboratory, and the suitability of using asymmetrical float locations was investigated. Reginald J. Mitchell used this knowledge to the maximum extent possible and re-edited his project. For example, the use of surface coolers managed to increase the speed by 38.3 km/h. A three-row Napier Lion VII engine with an output of up to 900 hp was chosen for the drive.

The Supermarine factory built a total of three S.5 aircraft in 1927 (Sn. N219, N220 and N221). For the competition, which took place on September 26, 1927 in Venice, the British sent three Supermarine S.5 aircraft, a biplane Gloster IV and a Short Crusader. The Supermarine S.5 specials were a huge success, the Italian Macchi M.52s dropped out in the first, second and seventh rounds, the Gloster IV resigned in the sixth round and the Crusader did not start at all. - F/Lt. S. N. Webster, A.F.C. (N220), and F/Lt. Worsley (N219) with its aircraft took first and second place, reaching average speeds of 453.26 km/h and 439.636 km/h.

After this victory, the British tried in early 1928 to set a world speed record for this category of aircraft, in this series of attempts was destroyed the third aircraft (N221). The speed record of 512.76 km/h eventually fell-did not fall, the Supermarine S.5 reached a speed of 514.285 km/h, but it was not a break of as much as 1%, which was necessary to recognize the FAI record.

One aircraft was eventually sent as a backup aircraft for the Schneider Cup in 1929, in this race took a beautiful third place for Supermarine S.6and Macchi M.52bis.

I would like to add that the engines of the second and third S.5 aircraft were of the Napier Lion VIIB type with an output of 875 hp, these engines were equipped with a reducer, the Napier Lion VIIA engine had direct drive, 900 hp and a weight of 386 kg, which was 36 kg less than how much the geared motors weighed. 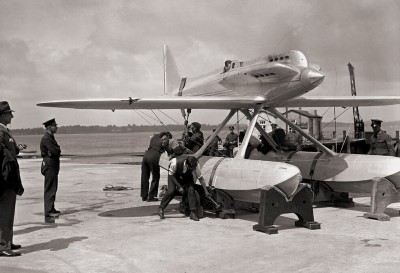