In parallel with the development of multi-purpose aircraft Tornado at the beginning of the seventies to start work on the construction of the container of the MW-1, which should form one of the major weapon systems of machines Tornado IDS intended for the German Luftwaffe. The development and subsequent production realized by the company Raketen Technik GmbH, a subsidiary company of companies MBB (later DASA) and Diehl.

MW-1 and its submunitions were primarily constructed for the performance of the following tasks:
- destruction of the military airports of the adversary (GPA, traversing the runway, hangars, warehouses, fuel and other partly zodolněné construction)
- the destruction of the larger clusters of armored techniques

The container is made up of four segments, each of which has 28 raketnic (the whole container together 112) × 132 mm. Submunitions is vystřelována on both sides of the pyrotechnicky. Vyprázdění container takes about 0.6 seconds. According to the submunitions and the parameters of the flight can one container to cover the area wide 300 - 500 metres away, and a long 180 up to 2 500 metres. MW-1 can be "empty" already at a height of 60 metres above the ground at speeds of around 1 000 km/h.

After more than 15 years of conceptual studies and development work with the serial production sold all in 1984. The first MW-1 to the operating services of the Luftwaffe began to receive at the end of the same year. For the needs of the German air force originally planned to purchase 2 554 specimens. With the end of the Cold war, this figure was revised, and by the end of 1994 was for German needs produced a total of 844 (sometimes it is even the number 850) containers of MW-1.

The second and the last user of containers of the MW-1 has become the Italian air force. The supply of approximately 100 units have been launched in the year 1987.

The container has not been operationally deployed. One of its biggest drawbacks is the fact that it is designed for adjustable suspension only on airplanes Tornado. At this time, the MW-1 is already outdated and for the tasks they perform today would used the air armament category "stand-off". 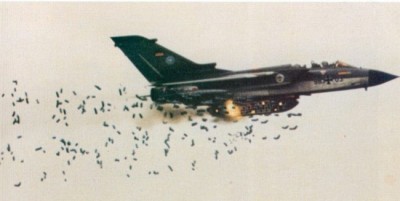