In 1915 began the british admiralty formulate plans for the seaplane, which would be able to attack the German warships in their hitherto safe harbours. Because the upper deck of the ship was significantly weaker armoured than the hips, the author of the project, Harris Booth of the air department of the admiralty, proposed as the basic armament of the Davis dvanáctiliberní bezzákluzové cannon that could from a height of 1500 metres firing at moored boats. In addition to this cannon, supplemented by two machine guns Lewis, produced two further variants of weaponry, and it osmnáctipalcové torpedo Whitehead Mk.VII with one Lewis or 22 stoliberních pum, also with one Lewis. Because of the projected anti-aircraft fire machine guns and rifles were also required to armour the vital parts of the aeroplane.

The implementation of the project was entrusted to the firm of J. Samuel White & Co Ltd (Wight Aircraft) from Cowes on the isle of Wight, which has created for its time a huge plane, known as the Wight And.D. Type 1 or Admiralty And.D. Type 1 (where And.D. means Air Department). This dvoutrupý float biplane with a significantly longer upper wing was to be originally powered by three engines Sunbeam Nubian power of 150 horses, jeichž development but late (eventually, as the Nubian II, came into production in mid-1917) and they were replaced by engines Hispano-Suiza similar performance. The engines were mounted in the bow of both hulls and a third of them in the back of the pilot's nacelle, where he had to propel a pusher prop. The Gondola itself was richly glazed glass Triplex, the floor and sides of the cabin were lined with manganoocelovým armour which protected the engines. Of the same material were made also of the fuel tank and perhaps even floats, created by E .W. Stedmanem. The bed for the cannon, located also in the central nacelle, was to propose a Harold Bolas. The original bezzákluzový cannon was already, however, rejected and replaced with a certified classic dvanáctiliberním cannon Naval Landing Gun with elevation angles from -38 to +49°.

Soon after the commencement of the construction of the prototype, it was found that its performance will be severely inadequate, but yet the admiralty insisted on its completion. Because of this it was decided to modify the aircraft so, to avoid to achieve greater heights and his feeble engines were sufficient. For this purpose have been made and a special propeller, fitted on the trailing edge of the leaves even adjustable flaps (?). This prototype was labeled as And.D. Type 1 Well. 1000, ordered were also seven other machines - three other cannon (with numbers 1355-1357), and four bombers (1358-1361). According to the custom of the admiralty to label the new types according to the number of the first retransmission of the machine got all these Wighty name Admiralty Type 1000. Work on the prototype Well. 1358 finally progressed much faster than the Well. 1000 and for the most part has been completed already before July 1915. Yet but this machine ready for testing earlier than may, 1916. It was as the power unit selected engines Sunbeam Cossack about 310 horsepower and used the classic propeller. Armoring of the cabin was so generous, that crew saw, actually, only straight ahead.

After the first short test flight with the pilot Sqn Cdr J. W. Through the saloon and Barnsem Booth as an observer, 31. may 1916 took place flyover 1358ky from Cowes on the hydroplánovou base in Felixstowe, again through the saloon as a pilot, and Harris Booth and Francis Bramwellem in the role of passengers. After the "short" start (24 km) to the plane eventually left from the surface, while the has reached a speed of 130 km/h. Due to a malfunction on the oil but it was soon forced to land at Newhaven, where it was in the repair up to 3. June, when the flight continued to Stedmanem on-site Booth. This time it took the aircraft about twenty minutes before he was able to peel off from the surface, which helped only the waves on the open sea. The Pilot decided to fly over Kent, but failed to get the aircraft to such a height that even flew over the coastal cliffs, so eventually he was forced to fly ignominiously around the coast to the mouth of the Thames. Here finally was able to reach greater heights, and that the entire 122 m, but then there was another malfunction in the pipes, this time the fuel, and because of cákajícímu gasoline had to be shut down forcing the engine. Downright embarrassing years, during which he had even been the pilot for the flight to fix the upper right wing, damaged during a rough start, it ended up landing on the Gunfleet Sands, where then the machine was towed člunen to Clacton-on Sea. To Felixstowe finally And.D. 1 arrived (after a level) a day later.

This amazing flight proved that the plane is still podmotorovaný. In July 1916 it was therefore decided on another exchange, this time for three engines Sunbeam Viking on the performance of 450 to. This took place in November, but it is uncertain if then there were some further attempts at take-off. Eventually the aircraft was damaged in handling on the crane, maybe even deliberately, to him, the navy finally put away. And.D. 1 No. 1358 he was 8. march 1918 definitively written off, its floats, filled with sand, then reportedly served as a roof to the bomb shelter and the gondola like a real greenhouse. After the experience with this machine was the prototype of the number 1000 variously modified, lightened by the removal of a large part of the armour (this also because of the need for moving the imposition of a cannon), so the crew could now even see around you, but up to 27. January 1917 to avoid flight tests, and it was clear that the whole concept of the aircraft absolutely obsolete. There were running (or poplouvací?) tests, but probably this aircraft never flown and in march 1917 he was left to his fate. Stopped were also all work on other prototypes. 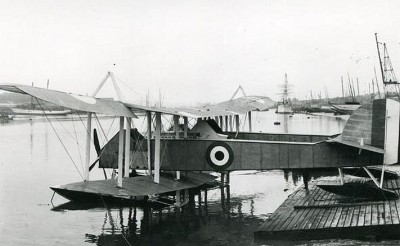