URL CZ: https://www.valka.cz/CZK-Praga-V3S-O-1-t64358#624687Verze : 1
URL EN: https://www.armedconflicts.com/CZK-Praga-V3S-O-1-t64358#624687Version : 0
brano MOD a year ago
In 11/1953, at a meeting of representatives of the Command of the Tank-Mechanized Army, the Military Technical Institute and other components of the army, an analysis of the issue of armored personnel carriers was performed. The possibilities of fulfilling the states of units, whose needs still lagged behind the table states, were taken over. The demand for new modern transporters was also not satisfied. The needs of the army were still met by the captured German half-belt armored personnel carriers Sd.Kfz.251 from World War II. Although the HAKO project was launched (future OT-810 ), early deliveries of serial machines could not be expected due to constant changes in requirements. Experts from VTÚ thought about the future and recommended the development of more mobile and especially amphibious belt conveyors. However, this would further delay development and delay series production. The threat of a potential conflict with the Western powers forced military officials to launch the development of a new type of armored personnel carrier on the platform of a newly developed truck Praga V3S. It was a kind of backup emergency project. Optimistic assumptions took into account the position of the prototype and its testing in 1954, production should start in 1/1956. Despite this effort, however, almost no work was done on the project of this vehicle in 1954-55. It was only after General Kratochvíl's rebuke of November 8, 1955 that the work began and the required specifications were determined. The following specifications were required: maximum height: 2000 mm width: 3320 mm clear height: 400 mm maximum speed: 75-80 km / h specific tire pressure: 1.8 kg / cm 2 off-road capacity: 1900 kg with a crew of 20 soldiers + driver and vehicle commander ability to tow a trailer weighing 3000 kg ability to resist firing infantry weapons (8, 10 and 15 mm armor) Development had be derived from Praga V3S or Tatra 111. Functional prototypes were to be delivered by 3/1956. The minutes were approved on 17 December 1955 by the Minister of National Defense gen. JUDr. Alexej Čepička. Subsequently, the development work started. The paradox was that even a pair of design proposals of two competing companies was created. Under the index V3S-O-1 a prototype vehicle was created, which was made by workers Opravárenské závodů Přelouč (registration number 535001). Under the V3S-O-2 index, a prototype was created by technicians of the Prague Automobile Works of Klement Gotwald (Prague) (registration number 530077). It was two quite different vehicles. The reasons why a double development was decided in time, financial and capacity constraints are not known. The main task of the vehicles was to transport two shooting teams. Another requirement was the possibility of pulling parts of caliber 85 mm ( vz.52 ). V3S-O used the Praga V3S platform with 6x6 drive. The platform was to be mounted from above an open armored body with a concept resembling a body Sd.Kfz.251. The drive was to be provided by a Tatra T-912 diesel engine, the same as it was in standard trucks Praga V3S. An interesting design feature was the addition of a fourth wheel between the front axle and the two rear axles. The wheel was not driven, but it was rotatable and was supposed to make it easier to overcome terrain waves and obstacles. The prototype from Přelouč had a foldable wheel, the Prague prototype had a fixed wheel. The V3S-O-2 had a shortened chassis. The performance of the prototypes was almost identical. The crew consisted of a driver and his assistant. Two machine gun teams with a total of 11 soldiers (platoon commander, two team commanders and eight soldiers) were taken. If the transporter was used to tow an 85 mm cannon vz.52, the crew consisted of the driver's assistant other seven men (commander and six cannon soldiers). Ten crates of ammunition were transported to the cannon in the vehicle. In the case of using the transporter by engineer units, the crew also consisted of 11 men, but they were equipped with a pair of small rubber boats, two mine searchers, three 70 meter ropes, ten shovels and ten pickaxes, 20 cork lifebuoys, a saw, two axes, a tracer, marking pins, 10 kg of wire, 20 boards and two sticks. The use of V3S-O in the role of transporter of the anti-tank team with a tarasnice was also considered. In this case, it was required to solve small adjustments for the attachment of weapons and ammunition.The main comparative tests between the two prototypes were performed at the 104th Mechanized Regiment in Jince in the period from 7.8.1956 to 25.8.1956. A prototype of the HAKO half-belt transporter ( OT-810 ) also took part in the tests. The HAKO half-track prototype ( OT-810 ) clearly excelled in field tests. The prototypes of the V3S-O program excelled in capacity. They had more combat space, where it was possible to load more material, more soldiers. The V3S-O-2 handled heavy machine gun fire better than its competitor V3S-O-1. He had a swivel bracket mounted, with the help of which he could fire even while driving. The V3S-O-1 could only fire when the vehicle was stopped. During the tests, the prototype V3S-O-1 covered a total of 984 km on the road and 179 km in the field, the prototype V3S-O-2 608 km on the road and 115 km in the field. Both prototypes of the V3S-O program had a tough competitor in HAKO ( OT-810 ), which also won the competition for a new armored personnel carrier. Wheeled transporters were not fully suitable for combat in the conditions at the time. The Commission proposed to develop a new type of wheeled and crawler transporter, both to be seaworthy. Until its development and serial production, HAKO was to be produced ( OT-810 ). The V3S-O program has been stopped, the fate of the prototypes is unknown. 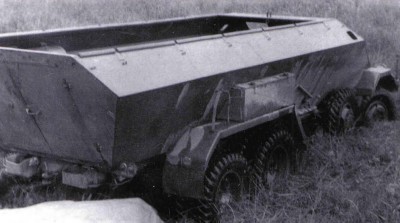 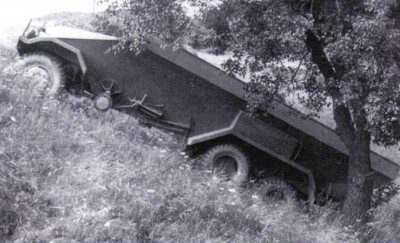 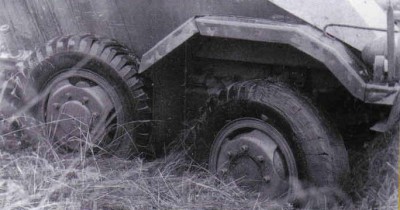 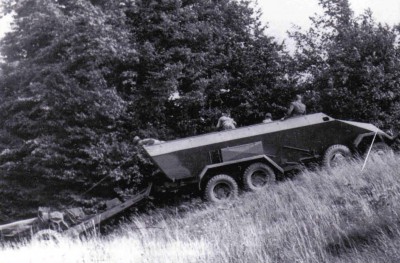 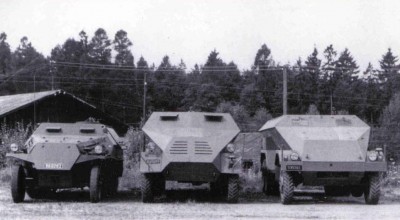 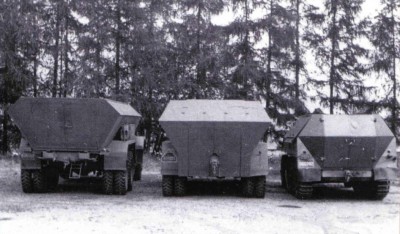