The prototype was based on the requirement of LFT (Luftfahrtruppen) on the development of a modern and powerful bomber powered by three engines. In August 1915 was sent to the company Lloyd, Oeffag and Phönix, which were granted funds to build two prototypes of the bomber trojplošníků. The machine had to be powered by one of the more powerful engine in the main hull and the two weaker engines in the side hulls. Another requirement was to load capacity 200 kg bombs and the endurance of 6 hours. Defense aircraft should be provided a total of four machine guns, two should be in the main hull and two side hulls.

In January 1916 the company added Lloyd as the first drawings and specifications of two bomber trojplošníků called Luftkreuzer I (type LK I), later Lloyd 40.08, and Luftkreuzer II (type LK II), later Lloyd 40.10. Machine 40.08 has been completed 20. June, 1916 and was ready for engine testing at the airport in Aszódu. In the starting position of the aircraft was found to be heavy on the nose and the center of gravity of the machine was perched too high. During ground running tests, there has been minor damage to the bow planes, when after the release of the lan aircraft flipped on the bow. That's why she was reworked undercarriage part - was added a third undercarriage leg under the bow of the aircraft. After incorporation of structural modifications in Aspernu the aircraft was ready in October 1916 to the first take-off. The machine had a pilot Oberleutnant Antal Lanyi-Lanczendorfer. There is no evidence that the aircraft rocketed into the air. In early November Flars (Fliegerarsenal) noted major difficulties in flight tests and started to think about reducing the amount borne by the bombs in order to reduce the total takeoff weight of the aircraft. Work on the development have taken place on, but in a considerably limited form. In December, recommended the Flars mounted on the chassis of the additional massive rails. These were placed behind the main undercarriage wheels and at the same time there has been to remove the spurs under the tail surfaces. This adjustment was implemented probably in February 1917. In march, an application was submitted to rework of the airplane, but was rejected, then came to a halt all work on the development of the airplane Lloyd 40.08, and the skeleton of the aircraft was stowed. In January 1918 he was ordered to transport the remnants of the aircraft for disposal to the Cheb.

Structurally the aircraft was designed and built as a trojtrupý triplane unequal span wings. The upper wing had a span 23,26 meters and a width of 2.40 meters, setting the length for 22.38 meters and a width of 2.20 meters and the span of the lower wing was 16,84 metres at a width of 2.00 meters. The wings were coated with a veneer polished to a high gloss. The middle wing was attached to the bottom of the main hull, the top and bottom were carried by the system of struts and braces. The gap between the two upper wings was 2.10 meters and between the two bottom 1,75 meter. The total bearing area was 110 square meters. Underneath the main hull between the upper and lower wing was placed aerodynamically shaped gondola, which was probably (according to windows) the habitat of the bomber. In the main hull was placed a twelve-cylinder engine Daimler with an output of 300 horsepower, which powered a wooden two-blade pusher propeller. In front considerably projecting section was the habitat of the two shooters, who had an excellent view in all directions. The upper edge of the shooting stations were placed approximately in the same plane as the upper wing. The shooting stations were also equipped with a window. In the first embodiment of the bow was a window of rectangular shape with rounded corners, after adjustments chassis has a window in the bow of the already circular shape. For workplace shooters were under the upper wing placed the cockpit of the pilot, which "turret" from a straight view ahead. Side hulls were created by modifying the fuselage of the aeroplane Lloyd C....II. In each of them was mounted six-cylinder engine Daimler about the performance of the 160 horsepower, driving a traction two-blade wooden propeller. Both propellers rotate in the same direction. In each of the side hulls was behind the trailing edge of the wing, the cockpit for the gunner. The tail surfaces were formed by two horizontal wings and four vertical surfaces of the placed between the záděmi side hulls. The first version of the chassis was composed of two main undercarriage legs, each of which has four wheels with wire spokes and a pair of spurs under the tail surfaces. Gradually was added to the front undercarriage leg also with four wheels affixed to an oblique forward facing beam and the auxiliary wooden rails for the main podvozkovými wheels and vice versa were removed stern spurs.

Even as the prototype was carrying the machine markings of the Austro-Hungarian empire. Black isosceles tlapaté cross in a white field were placed on top of the machine, on the outer sides of the side hulls on both sides of the outer vertical tail surfaces and on the underside of the lower wings. The location on the upper surface of the upper wings can assume from the photos but is not noticeable. The military designation of 40.08 was made by black paint under the window of the front post of the shooters on the central hull. 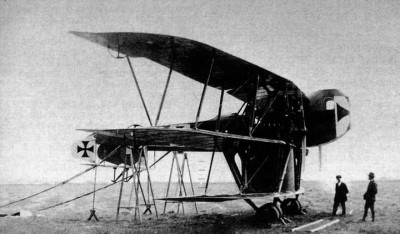