History of
The first prototype built Vickers in 1937 (1938) as his own private initiative, and the prototype was given the designation of Purdah. Originally supposed to be a "cavalry" tank (fast light tank) resulting from increasing little tank, a thickening of his armour and the use of the Christie-type chassis. In the course of the tests in 1938, although it was found that these are not an exceptional machine, but some of its parameters (such as speed and agility) seemed to be so interesting, that continued in other tests with a view to possible orders from the army.

The british army on the upcoming vehicle briefly looked and expressed cautious interest. After own tests requested some changes and despite the not very convincing performances is ordered in the number of 120 pieces. It was envisaged using them for training, or as a reconnaissance tank. The delay incurred with the launch of the new production and the required modifications have caused, that the first tanks came off the production line in July 1940. As shown by the latest fighting in Spain and Poland, were then light tanks too weakly armoured and few armed. In terms of equipment, was on this tank much better, but armour was the same as for types which German and ex-czechoslovak tanks directly deklasovaly. But after the disastrous battle of France, was initiated by the production continued.
He had a combat value of an armored car, but he had more flotation. And was no longer available. Mark VII was just a demonstration of good design at the wrong time. If it was this tank and not the Mark VIB, which was then serving in France, she'd get in fights British and German tankers undoubtedly observe a greater balance of power. The result would have been undoubtedly the same, but it wouldn't be so clear. Light tanks were after the battle of France překonstruovány so that at the end of the war they had stronger armour and more powerful guns than heavy tanks of the early war.

Over time, the designation of the tank several times changed to PR tank, A17E1 and finally the Tetrarch. What concerns the production are between the various sources of contradictions. As the period of production is referred to the period 1938-1940, but also 07.1940-11.1941, the third source says that the first tanks began leaving the factory in September 1939. The first order sounded to 120 pieces, but the final number of units produced should be number 177 (171). And as for the reason, the end of production, I found two different versions. One says that the technical parameters were just not sufficient to continue production, and the second says that the factory which manufactured the fuselage just in November 1940 bombed by the German Luftwaffe so that it was easier to build a factory on promising tanks(or one version I yet could not verify).
British tank troops was not of the martial parameters of the tank too excited and tanks were used primarily as training. In a period of crisis after the battle of France, but could use even this weakly armoured and armed tanks.
After the outbreak of war with Russia, she added the british government to the USSR in autumn 1941 (spring 1942) 20 tanks, where they were used primarily for the training in coordination of units.
In 1943 they were to the emerging airborne units included tanks Tetrarch, for which they were developed and corresponding glides Hamilcar. Then also have been overkill for howitzer caliber 76.2 mm (3“) and the redesignation on the Tetrach AND EN. Tanks the Tetrarch is in service with the british armed forces remained until 1950, when they were from the british air force discarded gliders Hamilcar.


Characteristics and construction
The "classic" tank with the running gear the Christie type with four large traversing wheels, last served as the driving roseta and the front as a guide. The tank was used "free" belt, the slight curves were used přisunování or odsunování the inner road wheels, in order to create the strips arc. Christopher Chant in his Encyclopedia of tanks it is reported that the procedure was in such cases, the used filming completed. If it was necessary to turn sharply, has been classically přibržděním proper belt.


Fighting service
The first limited combat deployment of this tank lived to see the end of the year 1942 during the landings on Madagascar (operation Ironclad). Due to problems with the cooling of the engine, was dropped from his deployment in North Africa.
At that time, the tank was from the position of the piles of scrap transferred to new tasks, which was reinforced by the airborne troops of the armored vehicle providing fire support. Mark VII so he got a new use and a new name "Tetrarch". The Tank was limited used paratroopers during the D-day (20 tanks) and when crossing the Rhine (03.1945). A few tanks were for the provision of fire support přezbrojeno 76.2 mm howitzer (3") and marked with the Tetrach ICS. In 1941, he was Tetrarch used to experiment with Strausslerovým system DD (duplex drive) for the crossing of rivers. One company of these tanks remained in service until 1950, when they were from the air force discarded cargo gliders capable of their transport.
The USSR received 20 of these tanks in the framework of the program "lend lease". Of its local deployment with too doesn't know, I've only seen one photo, on which the Russian T-34 leads a group of Tetrarchů to attack. According to the Russian server was just deployed into the fighting in the Caucasus and in the Crimea. Their local deployment, however, limiting how used fuel, and ammunition.


a Further development of the type of
Tetrarch DD – amphibious tank, equipped with a waterproof screen and with the propeller; in June 1941 was to this version rebuilt one tank
Tetrarch CS – armed with a howitzer caliber 76.2 mm
Harry Hopkins – a more advanced version with better shaped hull and turret.. 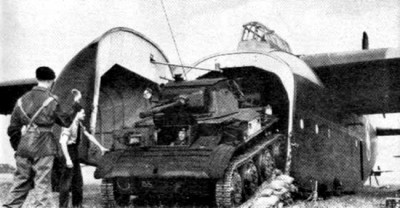 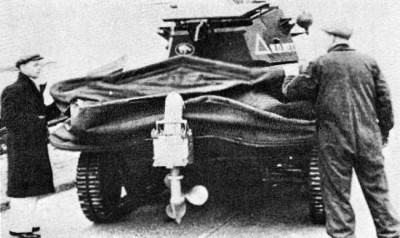 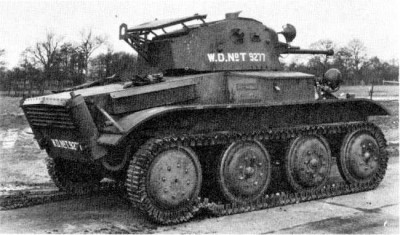 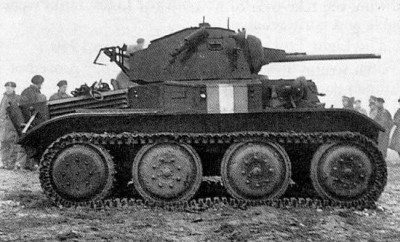 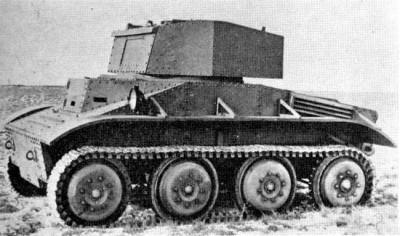 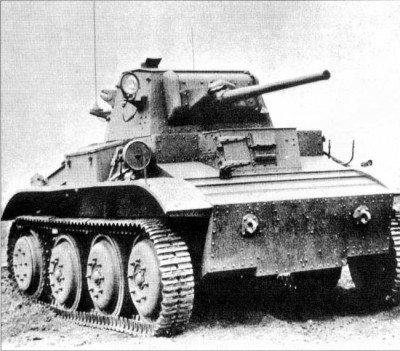 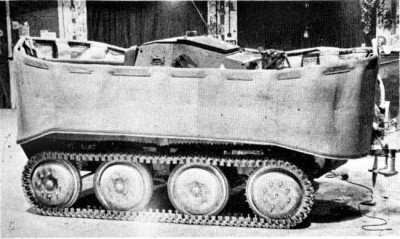 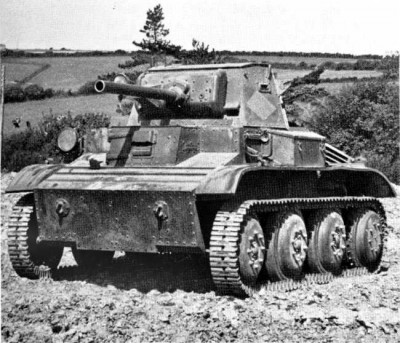 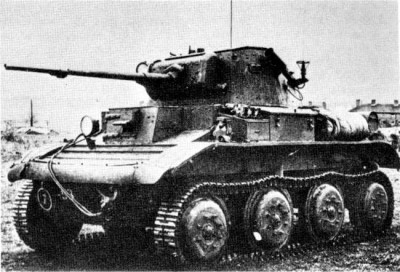 URL : https://www.valka.cz/A17-Light-Tank-Mk-VII-Tetrarch-t73198#141696Version : 0
Kovran 13 years ago
Design A17 E1 Tetrarch comes from a type of Light Tank Mk VII A17 firm Vickers Armstrong, which originated as a purely "private" initiative with the aim to create a "cavalry tank", i.e. a light equivalent vehicles of the category "cruiser".
The vehicle was known under the name of Purdah or PR tank only after other adjustments, he was assigned the title of Tetrarch.
Chassis design Leslie Little was using the principle of "free belt"....
Management Tetrarchu was based on the possibility to scroll (left and right) 2. and 3. roadwheels on each side, thereby causing the creation of the "arch" of the belt and the vehicle executing a turn to the side, where there was a round of "against or drawn" towards the sidewall of the... all allow for "loose" construction of the strip, which was constructed like/as well as for the Universal Carrier (there inched the entire two-wheeled cart)...
Of course, for the other spins the vehicle was required to brake the belt on the side, where should the vehicle spin - it happened přibržděním to stopping of the drive wheel on the relevant side.
With regard to the use of the principle of the Christie chassis - the predecessor of the Tetrarchu, the above-mentioned Light Tank Mk VII A17 Purdah actually could (theoretically) move around without belts, had the wishbone on the first traverse wheels, which was navigable...
Cannot be excluded (for type A17 E1 Tetrarch), that due to the complexity of the structure was part of the sub-groups steering the front road wheels removed, and in practice, therefore, was used only by the system management vysunováním/zasunováním the inner road wheels, as was described above....
URL : https://www.valka.cz/A17-Light-Tank-Mk-VII-Tetrarch-t73198#152393Version : 0
palič 13 years ago
Light Tank Mk VII, Tetrarch CS (T9274), Bovington Tank Museum, 2008. This machine is in the collections of the museum, located since 1949 (photo ©Radek Havelka). 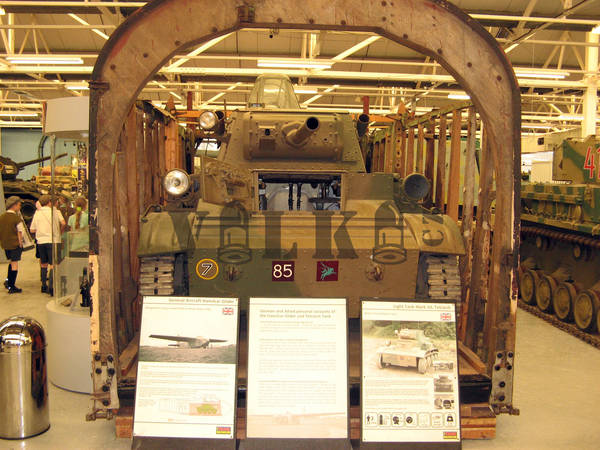 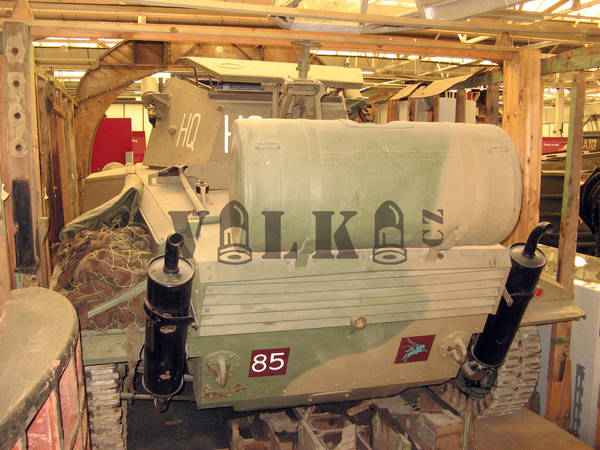