LEGAL MEASURES
The presidium of the Federal assembly of the
of 13. February 1973
by Order of the Victorious February

The presidium of the Federal assembly of the Czechoslovak socialist republic has resolved according to the article. 58
paragraph. 3 of the constitutional act no. 143/1968 Coll., on the czechoslovak federation, on this statutory measures:

§ 1
The award for exceptional merit of the revolutionary workers ' movement and of socialist construction of the Czechoslovak
socialist republic and the award of exceptional merit for the development of the international communist and
the labor movement establishes a honors Order of the Victorious February.

§ 2
(1) the Order of the Victorious February is awarded to individuals who have exceptionally contributed to the czechoslovak
the revolutionary workers ' movement, actively fought against the bourgeoisie and fascism, particularly to contribute to the achievement of victory
socialism in the Czechoslovak socialist republic and its political and public activities are especially significant
responsible for the implementation of the policy of the Communist party of Czechoslovakia in building a socialist
the company, the individuals who particularly contributed to the development of the international communist and
the labor movement, friendship and cooperation between nations.
(2) the Order of the Victorious February is awarded whether or not the work or other sorts of groups.

§ 4
Order of the Victorious February has the shape of a gear generated by the angled beams and the ears, in the center of which is
asked a red enamelled five-pointed star with hammer and sickle. The order is struck of silver; the sickle, the hammer, cobs
and the rays are gilded, the spokes polished. Gilded pendant clasp consisting of linden leaves and a stylized
ribbon with the inscription "Victorious February 1948" is the badge of the order associated with the blue-red-and-blue ribbon, whose colors are in
a ratio of 17 : 4 : 17. Ribbon medal is 38 mm wide and 55 mm long.

Section 6 of the
This regulatory action becomes effective on the date of publication.

Source:
www.prazskyhradarchiv.cz - a List of the holders of
according to the register of holders (the Archive of the CPR, the fund CPR, Registration books for the granting of state honours). 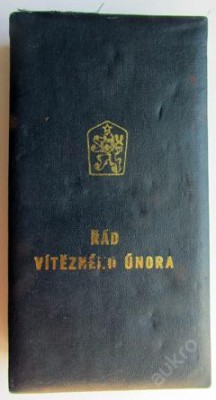 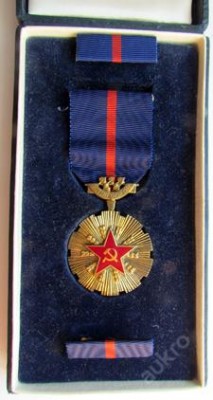