URL : https://www.valka.cz/E-100-Panzerkampfwagen-Tiger-Maus-t8241#375612Version : 0
brano MOD 11 years ago
The idea of a 150-ton tank, which should be a competition of the program Maus of the Porsche company originated at the meeting representatives of WaPrüf 6 and representatives of Krupp11.9.1942. The project was to use the chassis components of the tank Tiger, including the Maybac engine h HL 230, or gearboxes Olvargetriebe OG 40 20 16. The tank was to carry the same tower with armament as the competing project [url = url=/viewtopic.php/t/6456/title/Pz-Kpfw-Maus] Maus[/url], ie cannons 15cm Kw.K. L/37 (50 rounds) and 7.5cm Kw.K. L/24 (100 rounds) and machine gun MG 34 (4500 rounds). The chassis was to consist of 32 wheels with a diameter of 650 mm. The crew consisted of six people. After modifications to the initial designs, the appearance of the tank (drawing W 1674) was presented on December 1, 1942 at a meeting of representatives of Krupp with Oberbauratom Kniepkampom. It was a classic concept of the time with a tower located in the middle of the hull. This date can be considered the birth of the Tiger-Maus project, later renamed the E-100. WaPrüf 6 considered this proposal promising due to its potential rapid start of production. Chassis components from Tiger II company [i :aaaaaa] Henschel. The company Krupp further developed the project and on December 7, 1942 submitted further calculations and new drawings ( W 1677). The expected weight of the machine was to be 130 tons, the drive was to provide a standard tank engine Tiger Maybach HL 230 (700 HP/522 kW), the control unit was to be Henschel L 801. The fuel supply was to be 1,200 liters of gasoline, the ammunition supply was to be 40 rounds (15 cm), 75 rounds (7.5 cm) and 4,500 rounds for machine gun ammunition. The chassis was to consist of 32 wheels with an increased diameter to 800 mm. In the ensuing discussion, the experts agreed that this project has compared to the project Maus companies Porsche better characteristics. In the later period, after increasing the engine power to 1000 HP (745.7 kW), the properties of the tank were to be even more favorable. The drawing form of the tank with a tower in the rear of the hull was also developed, but the calculations revealed shortcomings, resp. disadvantages in construction compared to the original design with the location of the tower in the middle of the hull. As far as the suspension of the wheels is concerned, the design allowed the use of both leaf springs and torsion bar suspension. However, due to the calculated low maximum speed of the tank, less financially and production-intensive leaf spring suspension was preferred.
Despite the preference of the representatives of the WaPrüf 6 project Tiger-Maus the project Maus of the company [i:aaaaaa ] Porsche in advance. He himself preferred Hitler, who made the decision on January 5, 1943 to introduce serial production of Porsche Maus.


The decision to focus on the Maus project , but after the cancellation of the project Maus and the start of the development unification program called E-series ( Entwicklungsreihe Versuchs-Panzerkampfwagen) in the spring of 1943, the project was renewed. However, the order for the development of the most difficult type of tank "series E", ie E-100 was not received by Krupp, but by Adler, who had no experience with tank development. This was because Krupp was burdened with other obligations.Work began on June 30, 1943, but continued very slowly. The originally considered use of a tower from the Maus project with the main cannon armament consisting of a 15cm cannon was replaced by a new design (drawing Bz 3269) of a lighter and less armored tower with a 12.8cm cannon, which was developed by Krupp pre plánovaný Maus II. Work on the completion of the prototype took place in a simple workshop in Haustenbeck near Paderborn. On January 15, 1945, photographs capturing the appearance of the prototype were delivered together with a report on the progress of work. The body was almost completed, the engine, transmission, control unit, fuel and electrical system, etc. were also installed. Coil springs were missing to complete the chassis parts, gears for the drive wheels were not delivered, etc. The wheels were all-steel and had a diameter of 900 mm. Conveyor belts were available to transport the tank by rail. The combat belts were not yet available, they were delivered before the end of the war, when they were found together with the unfinished prototype by Allied soldiers. The plans included a modified powertrain consisting of an engine Maybach with 1200 HP (894.8 kW) and an 8-speed manual-hydraulic combined transmission with a steering gear called "Mekydro ". In this form, the tank E-100 had to reach a maximum speed of 40 km/h.
The captured prototype of the platform was sent to Great Britain, where it was probably completed (see photo with battle zones deployed) and tested. After the tests, he probably ended up quickly at the scrap yard. 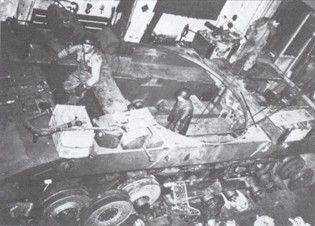 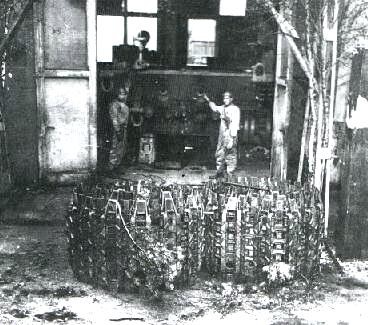 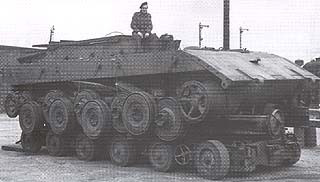 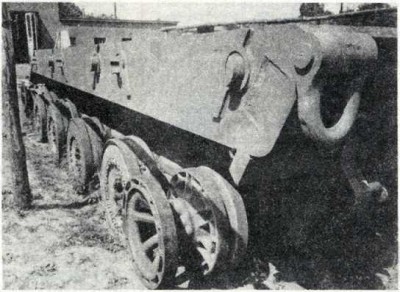 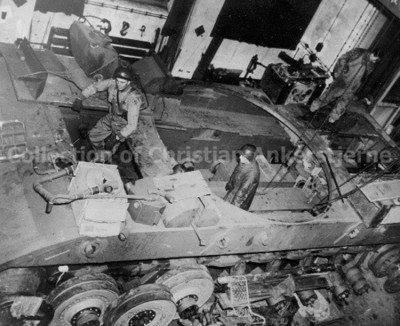 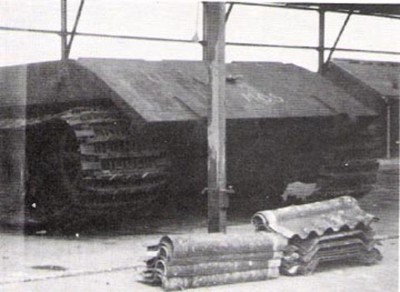 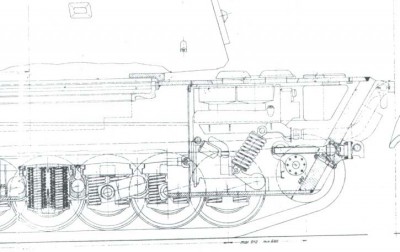 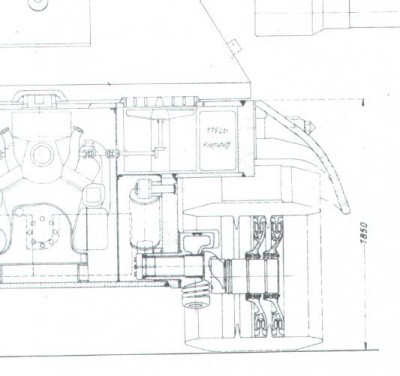 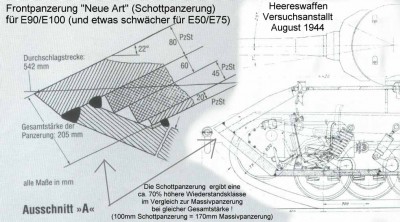 URL : https://www.valka.cz/E-100-Panzerkampfwagen-Tiger-Maus-t8241#31331Version : 0
brano MOD 18 years ago
Zaplachtovaná the hull of the prototype tank E-100 during transport on a heavy podválníku Gotha (with a capacity of 80t).
By the way does anyone know what is this truck involved in the podvalníkem, it reminds me of the american Daimond, but I guess it's not him..