Leopold Martin Ferko was born on January 29, 1915 in Great Falls in Montana, but later his parents, Slovak emigrants, moved to California. He grew up in San Francisco, where he graduated from South San Francisco High School and later went on to study at Stanford University. He was sports-based, one of the football stars at the university. He graduated from university as a bachelor and began teaching mathematics and English at the high school where he studied. The school football team also coached here.

February 3, 1941 Ferko joined the Navy. He became a pilot and served in Texas Corpus Christi as a flight instructor. In October 1943 he was promoted to lieutenant and in June 1944 he was transferred to Pearl Harbor and assigned to the Mixed Squadron 4 (VC-4) aboard the aircraft carrier USS White Plains (VC -4 consisted of 16 fighters FM-2 Wildcat and 12 torpedo bombers TBM Avenger).

Aircraft from USS White Plains performed the tasks of air support, anti-submarine combat (ASW) and fighter protection (CAP) for the needs of vessels concentrated in Gulf of Leyt. During one of the CAP missions October 24 1944, Lt. Ferko and his wingman Ens. The pool met with a formation of 12 Japanese single-engine aircraft (codenamed Oscar, it was Nakajima Ki-43 Hajabuza). They were lucky, at 17,000 feet, and the sun was behind them, so they approached the Japanese planes flying away from the city Tacloban unnoticed. Ferko started firing on the last Japanese plane, which soon fell to pieces after being hit by on-board machine guns. During the firing, Ferko approached another Japanese machine at a distance of 300 feet and was preparing for another intervention, when he himself fell victim to Japanese fire. The lightning reaction of the Japanese after their discovery caused the Japanese pilot to hang his tail, which damaged his plane with his fire and was about to neutralize it completely. Fortunately, his wingman hit, who managed to shoot down the enemy. Ferko was forced with a damaged plane to land at a field airport in Taclobane (which was fortunately temporarily in the hands of the Americans at the time), where until the next morning ( 25.10. 1944) were able to repair the aircraft and could fly it back to the mother ship. As a strong Japanese alliance approached Leyte, he was immediately deployed back into battle. During the 7 hours in the air, Ferko credited two Nakajima B6N2 Jill aircraft. During the last flight, a lack of fuel prevented him from returning to the mother ship and he was forced to spend another night outside (this time aboard the aircraft carrier USS Kadashan Bay (CVE-76)). The next day, October 26, 1944, before returning to White Plains flew with the VC-20 Squadron, taking over the middle part of the island scored another shot - Nakajima Ki-44 Tojo.

For his participation in the fighting off the island of Leyte, Ferko was awarded the Distinguished Flying Cross. He ended his service in the Navy with the rank of Lt. Commander. 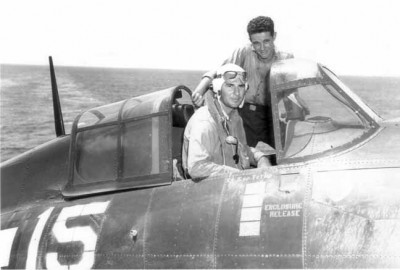