The German hand grenade M.1913 was included in the armament on the eve of the First World War, in 1913. The German army paid great attention to the development and production of this weapon, and so in 1914 Kugel M13 was mass-deployed. The Germans thus gained an advantage over their opponents, which some parties in this great conflict (World War II) had to quickly catch up with. However, the introduction of this new weapon was not without problems, many soldiers looked at the strange exploding balls with considerable distrust, and the High Command was forced to send engineer instructors to the units, who introduced soldiers to how to handle the grenade properly and how to use it as effectively as possible.

With its construction, the grenade followed the almost three hundred-year-old construction of the first hand grenades - a round cast iron body, filled with dust. The body of the grenade is a cast of gray cast steel with a diameter of about 8 cm, the outer shell is adapted to the surface of the shell to shatter into small fragments. The grenade was loaded with a black dust mixture. The cast iron body used to be marked from below. The grenades were transported without lighters, the filling was prevented from spilling by a zinc transport screw. The ready-to-use Kugel weighed approximately 1 kilogram and could be thrown up to a distance of approximately 15 meters. For more distant targets, a simple catapult was used, which could transport the grenade up to a distance of 300 meters.

The lighter of this grenade was very compact for its time and interestingly designed. It was a kind of tube, which was screwed into the body of the grenade, from which protruded about 4 cm. Inside the lighter was a simple system of ducts filled with slow-burning dust, which ensured the desired delay of the grenade explosion 5-6 seconds. The initiation itself was provided by a friction lighter. However, the main disadvantage of this construction was the effect that arose when the eyelet was pulled. The friction lighter ignited the dust in the duct, which was accompanied by a flame coming out of the upper duct. This flame almost always hit the fingers of the soldier who used the grenade. The soldiers treated this structural defect in their own way ... they used a hook with a wooden handle to pull out the lighter's eye, keeping their hand at a sufficient distance from the whipping flames. This "tweak" even appears in contemporary Russian manuals instructing Russian soldiers on how to handle trophy grenades. Another relatively problematic thing was wearing grenades in combat conditions.

While classic hand grenades can be elegantly tucked behind a belt, the Kugel does not allow any similar method of carrying. The solution appeared in the form of a kind of transport case. The steel strap and leather construction was fastened to the belt with a simple clip and Kugel was carried in it. The lighter eye was secured with a simple carabiner on a short chain. Before the grenade was thrown, the cage was removed from the belt. The bottom of the cage was released by unlocking the fastening, followed by a sharp movement, when Kugel left the cage and at the same time the friction lighter was initiated by pulling the eyelet, still secured by a carabiner on the chain. The soldier had 6 seconds to throw the grenade in the desired direction. Although the Kugel was better carried in this cage, the relatively complicated handling of the case prior to use was probably the reason why this solution did not become very widespread. 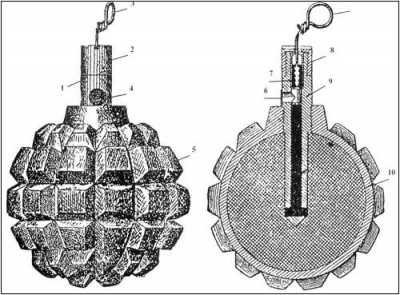 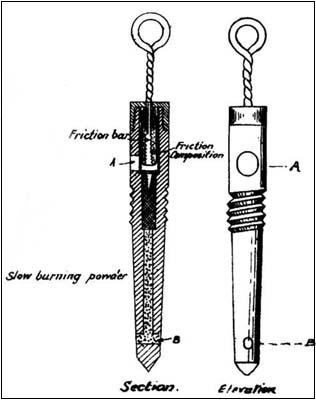 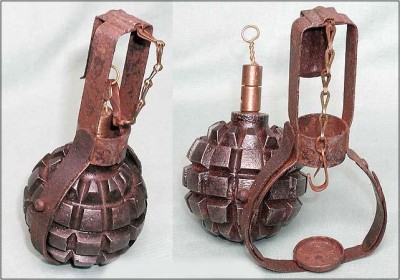 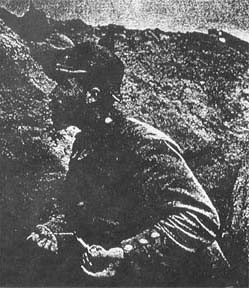 URL : https://www.armedconflicts.com/Kugelhandgranate-Mod-1913-t85618#316641Version : 0
Aksamit 11 years ago
here is the grenade in question with a lighter (a typical wire loop is clearly visible) source: own photo 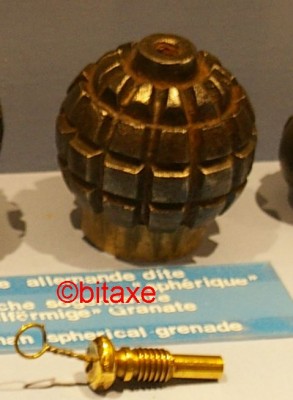