Brief History:
This aircraft was created in the pre-war period and for Great Britain was to set a world speed record in the category of ground aircraft. It must be said that the designers' hopes were justified, prototype Spitfire was a fast aircraft and its contruction had performance reserves. The world record holder has been the American Hughes H-1 aircraft since 1935, which reached a speed of 566 km / h. On November 11, 1937, the modified Me 109 V13 reached a speed of 610 km / h and thus set a record for Germany. This fact led the Ministry of Aviation to finance the development of the high-speed Spitfire.

The forty-eighth Spitfire Mk.I (serial K9834) was downloaded from the line and this machine has undergone major changes. The wingspan was reduced, because the altitude of the record flight should not be higher than 76 meters. Armament and unnecessary military equipment were completely removed. The engine bed was reinforced and a specially modified engine was installed in it Rolls-Royce Merlin II now giving 2112 horsepower, this engine was supercharged at a pressure of 1.93 atm (+28 psi) and burned "racing fuel" - a mixture of gasoline, benzene, methanol and a small amount of tetraethylol. The power of the engine was transmitted by a four-bladed wooden propeller with a fixed angle of attack of the propeller blades. The diameter of the propeller was reduced because the designers feared that the ends of the propeller blades would reach the speed of sound. Great emphasis was placed on the best possible aerodynamic solution, the cabin was low and the front plate was slanted to reduce air resistance, all rivets were recessed, ground and the sealant was subsequently reground, as well as all edges and slots were adjusted. Finally, the entire aircraft was sprayed with silver paint with a blue stripe and the designation N17. The entire painted surface was carefully polished. Due to the lower air resistance, a different shape of the pitot tube covers was used and the rear spur wheel was replaced by a fixed spur. The only offense against aerodynamic subtlety was the massive radiator under the right wing, but this forced a high-performance Merlin engine.

The first takeoff took place on November 11, 1938, shortly afterwards, the test pilot Purvis managed to reach a speed of 656.61 km / h, but reached this speed at an "too high" altitude of 915 meters. In order to achieve a higher speed at a height of up to 76.2 meters, further modifications were planned - a change in the cooling system. The upper hull fuel tank was removed and replaced with a water tank / condensation tank. Cooling was partly condensing and partly lossy, part of the coolant was returned to the tank and part was blown out like steam under the engine. The refueling supply was reduced to just 37 gallons (168 liters) and it was calculated that this fuel would be sufficient for the entire plant (2.99 km) including take-off and landing, and the coolant supply would be depleted while the fuel was depleted. These modifications were made in early 1939 and resulted in the removal of a large radiator under the wing.

Speed Spitfire, however, did not set any speed record, on March 30, 1939 he set the speed record Heinkel He 100 V8 by reaching a speed of 746.6 km / h and shortly afterwards (April 26, 1939) Messerschmitt Me 209 reached a speed of 755.14 km / h. Speed Spitfire was simply not enough for such a speed, so after the outbreak of war it was modified to the reconnaissance version of Spitfire PR Mk.II, a newly installed engine Merlin XII was cooled by the usual cooling system, the cabin was also standard with side "bulges". An F.24 camera for oblique imaging was installed on the left side of the fuselage, the aircraft performed only one reconnaissance flight, had a serious shortage for the reconnaissance aircraft - a small fuel supply of only 60 gallons (273 l), so it was used for fast connecting and courier flights. On June 14, 1946, it was scrapped, at that time it was already considerably worn out. He served at the PRU in Henston. 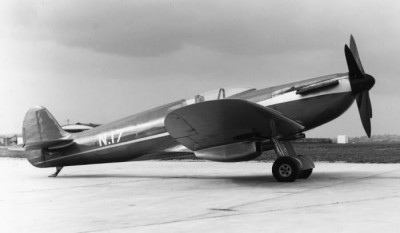 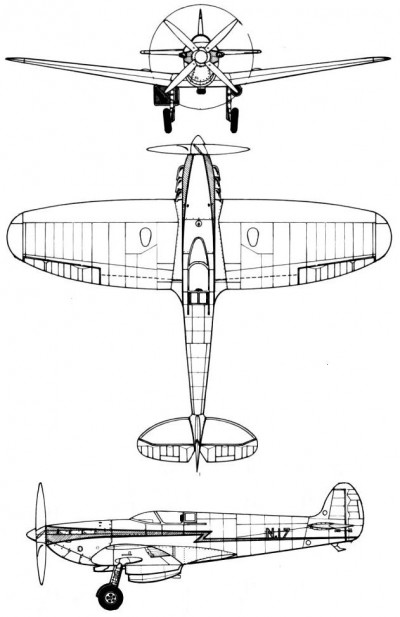