URL CZ: https://www.valka.cz/FIN-Sisu-t93317#349426Verze : 0
URL EN: https://www.armedconflicts.com/FIN-Sisu-t93317#349426Version : 0
brano MOD 11 years ago
In 1936, the Finnish Ministry of the Interior decided to commission the development and production of a new armored vehicle for police forces. The order was placed with Oy Suomen Autoteollisuus Ab.. The vehicle was known under the Sisu brand (a company called Sisu Auto Oy Ab. still exists today). At the time, the vehicle was well armored (8 - 11 mm) and heavily armed for a police vehicle. The armor plates were supplied from Great Britain, the hull itself originated in the shipyards Crichton-Vulcan Oy. The platform consisted of an unknown two-axle vehicle. The wheels were full, which could withstand shelling, but did not have suitable driving characteristics. The wheels were doubled on the rear axle. A turret was mounted on the hull, in which was mounted one of the four prototypes of heavy anti-tank machine gun Lahti L-35/36 caliber 13.2 mm and machine gun Lahti L- 33/36 caliber 7.62 mm. The second machine gun caliber 7.62 mm was mounted in the front shell of the hull. The prototype was a domestic competitive response to the Swedish Landsverk L-182, which Finns bought.
The prototype was not mass-produced, it served in the police unit until 1951, when it was subsequently sold to the Finnish army. In 1954, the machine was stripped of its armored body and the platform was rebuilt into a mobile crane. In 1961, the machine was broken down and subsequently canceled. The crane was used for a similar curious reconstruction of the captured Soviet armored vehicle BA-10, which carried designation BA-10N. Coincidentally, the armored body of the machine was preserved and in 1993, the reconstruction of the vehicle began. A suitable platform of similar dimensions was used, the wheels were used from a captured Soviet howitzer 152 mm caliber. The reconstructed prototype is now part of the museum collection of the Military Museum in the Finnish town Parole. 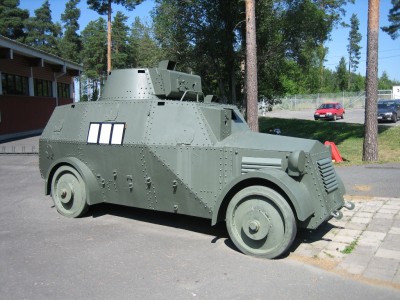 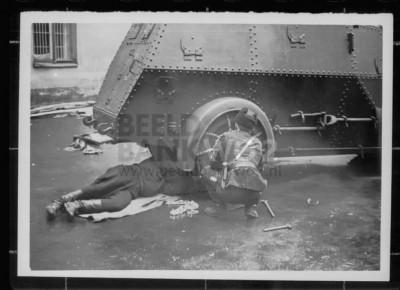