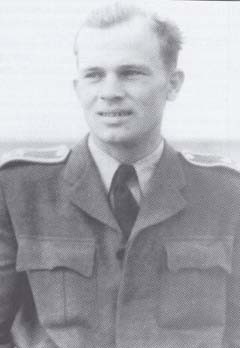 He was born on December 16, 1916 in České Budějovice in the family of high school professor of mathematics and physics Jaroslav Maňák, who was one of the founders of gliding in southern Bohemia. No wonder his four sons were active sailors. They then switched to powered flying, which enabled them to establish a South Bohemian branch of the Masaryk Aviation League, led by their father. It is therefore not surprising that Jiří Maňák began his military service in Prostějov at the School for Air Force Officers in Reserve. From September 1937 he studied at the Military Academy in Hranice. He then served as a navigator in the 72nd Squadron of the 6th Bomber Regiment, which used Avia B-71 aircraft, which was a licensed Soviet bomber Tupolev SB-2. He remained here until the signing of the Munich Agreement and in the autumn of 1938 he returned to the apprenticeship in Prostějov to complete the training of a fighter pilot.

However, the events of March 15, 1939 interrupted everything and Maňák therefore fled to Poland in the summer of 1939 and sailed from there to France. Here, a group of former MLL pilots joined, at the base in Tours, at their own request, an aviation continuing school and then a fighter course. However, the puppet did not fight in France and sailed from the port of Bordeaux on a Dutch cargo ship to Britain.

He was accepted into the RAF and first served in the 310th Czechoslovak squadron. However, it had a surplus of staff at the time and was not available in the British squadrons. From November 1940, therefore, began service with the 601st Squadron. Here he took part in patrols against German bombers and the first offensive patrols over the occupied territories, during which the Squadron clashed with German fighters many times. Maňák managed to shoot down two Messerschmitt Bf 109s. The first was received on 6 May 1941 south of Dover, the second on 2 June 1941 southwest of Boulogna.

The squadron at the time flew with the Hurricane Mk. IIB, but they began to become obsolete and were no longer enough for new versions of Messerschmitt. Therefore, the 601st Squadron was selected for rearmament to the new American fighter Bell P-400 Ariacobra Mk. I, in which the British placed great hopes. The first pieces of this aircraft began to come to the squadron in August 1941, but were a great disappointment to the RAF, because they did not achieve the performance promised by the manufacturer. During training battles, the aircraft was overcome by both British and loot, German fighters. Therefore, the British and Ariacobrami carried out only a few patrols over the Channel and then sent them to the USSR, where, however, these aircraft became very famous and flew many Soviet ace fighters.

In the summer of 1941, the 601st Squadron had four Czech fighters, who had the opportunity to fly with these aircraft and two of them, Maňák and Himr, with them in October 1941 completed several combat flights, but then the squadron was withdrawn from combat operations and by March 1942 it was fully rearmed to Spitfires Mk. VB. But Maňák was already on a well-deserved rest.

He returned to operational service on 7 July 1942, when he joined the 81st Squadron, but on 10 August he was transferred to the 611th Squadron, which flew with the excellent Spitfires Mk. IX. Maňák took part in escorting bombers with her and on 19 August 1942 the landing operation at Dieppe. Here, the pilots of the 611th, who started with the 402nd and 602nd Squadrons already at 5.15 to patrol the vessels, faced a group of Focke-Wulfs and Maňák managed to damage one at 5.55 He damaged another one Fw-190 on September 5, 1942. Maňák achieved both victories on the Spitfire F. Mk. IXC serial number BS 116 and code designation FY-N.

However, on September 22, it is translated again. This time to the 182nd Squadron, which was rearmed to depth fighters Hawker Typhoon Mk. IB. As part of the retrained pilots flew with the old Hurricanes Mk. I, which had similar flight characteristics as the new aircraft and soon the 182nd Squadron began business with Typhoons combat flights.

Typhoon, which disappointed as a conventional fighter, at that time began to apply as a depth fighter, for which it was determined by its speed of 657 km / h and strong armament of four 20 mm cannons, later supplemented by two 226 or 454 kg bombs and up to eight unguided missiles.Typhoons have become famous in this role, and they have dozens of destroyed ships, tanks, planes, locomotives and entire trains, and countless attacks on airports, railway stations, bunkers, gas tanks and smaller factories.

Of course, the 182nd Squadron also performed the same tasks. During these dangerous flights, Maňák proved to be a cold-blooded and prudent pilot, and already a month after his arrival he was given command of Squadron A.

Certainly that is why on May 1, 1943 he was appointed commander of the 198th Squadron, which also flew with the Typhoons. The activity of this squadron did not differ in any way from the activity of the previous squadron. However, Maňák was not allowed to rejoice in his position for long.

On August 28, 1943, the 198th Squadron participated in the escort of the battle Hurricanes over Welmedinghe in the Netherlands. At 19.00, Maňák's Typhoon JP 613 ( TP-N ) was hit by a flak and the pilot decided to land on the surface of the Channel, which was considered the most dangerous with this type of aircraft, because it immediately disappeared below the surface. Only a few pilots survived this landing and Maňák is one of them. He managed to get into a lifeboat, but the wind carried him to the Dutch shores, where he was also captured on August 29, 1943. Thus ended his jubilee three-year combat flight.

The puppet was then interrogated several times and in October 1943 transferred to the Stalag Luft III prison camp in Sagan. Here he immediately became involved in the work on the famous " Harry " escape tunnel. On March 24, 1944, 81 Allied pilots tried to escape through the tunnel, but the plan did not work out, and except for three lucky ones, all refugees were caught and most of them were shot at Hitler's command ( including the Czech Arnošt Valenta ).

Maňák was not selected for the group of refugees because, with his knowledge of languages, he was to act as a liaison officer between Germans and prisoners. That probably saved his life. In the spring of 1945, the prisoners were rescued by the Red Army.

Maňák returned to the Czechoslovak Republic on August 24, 1945 and began serving as the airport commander and military test pilot in Prague-Letňany. He also became one of the first MS. jet pilots when he took a jet flying course in England. In March 1947, he took part in the bombing of ice floes on the Danube, which dammed it and threatened flooding. Then he flew for a short time at CSA.

The turning point for him came in 1950, when he was accused of divulging state secrets and imprisoned until June 1951. After his release, he was no longer allowed to fly and made a living as a worker. In the mid-1960s, he was allowed to become a CSA pilot again, but after the events of 1968, he was fired for political unreliability. He received complete rehabilitation only after 1989. In 1992 he received the Order of MR Štefánik and a few months later, he died on December 29, 1992.

Jiří Maňák is the holder of a number of Czech and foreign awards, such as Czechoslovakia. War Cross, Medal for Bravery or the English DFC - Meritorious Air Cross.