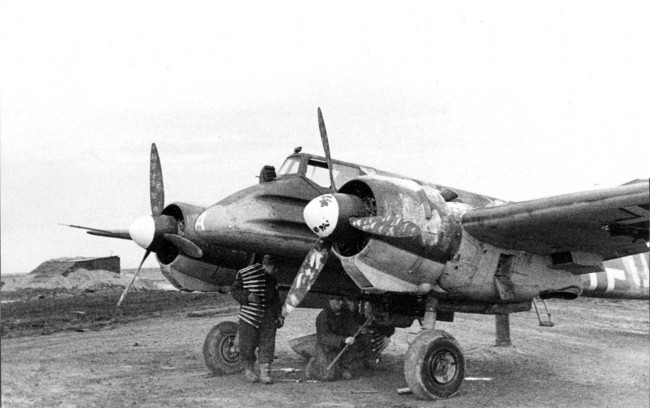 The unit was subordinated to Luftflotte 4 . Hs 129 supported the advance of German troops in the Crimea, which had the task of occupying Sevastopol . In June, the squadron received aircraft armed with a 30 mm Mk 101 cannon . The planes played a role in repelling the Soviet advance on Kharkov , destroying 23 Soviet T-34 , T-60 and Valentine tanks. 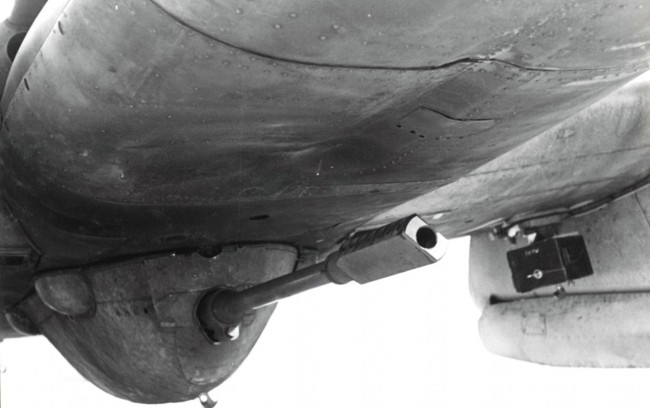 In addition to the successes, they also made known the shortcomings of the aircraft, especially the French Gnome-Rhone engines. The engines had many defects and overheated. In addition, it tended to ignite in flight. The technical problems were exacerbated by the lack of spare parts. It was not until September 1942 that the engines received adequate air filters.

Pilots 4./SchG 1 did not undergo training in the destruction of tanks. So they developed tactics of repeated attacks on a single tank, which was uneconomical. There were also problems with obsolete MK 101 guns. 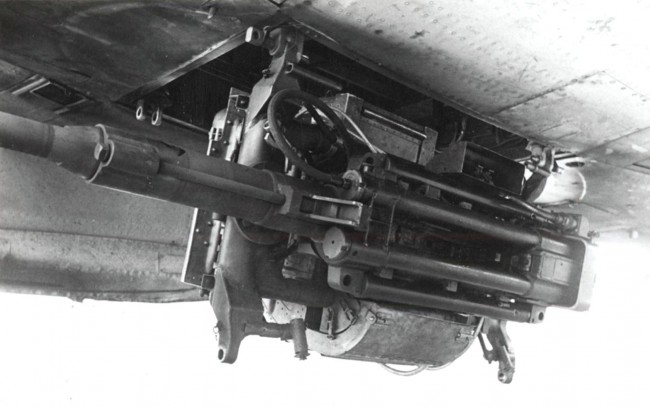 In the summer of 1942, the Luftwaffe command ordered that in each fighter regiment fighting in Russia be created one squadron for combat with tanks, armed with Hs 129. But it was created only Panzerjäger Staffel JG 51. Its commander was Lieutenant Wilhelm Eggers. JG 51 pilots were better trained and had better results. The squadron operated in the middle section of the Eastern Front. During the month, the unit destroyed 29 tanks. After the withdrawal, she underwent intensive training, when, for example, she fired at models of tanks. She also shelled the Red Army's loot tanks. The pilots had a 60% success rate.

In the autumn, an anti-tank squadron was established within the II./SchG 1. In November 1942, she was sent to the southern section of the Eastern Front. Only a few aircraft had MK 101 cannons. On November 16, 1942, Soviet troops broke through the position of Italian troops on the Don. German aircraft proved ineffective against Soviet tanks, Stuky and Bf 109E were not successful, but six Hs 129 from 8./SchG 1 destroyed nine tanks in two days. The unit lost several aircraft shot down by anti-aircraft artillery or infantry fire. In order to strengthen 8./SchG 1, the squadron was supported by Panzerjäger Staffel JG 51. 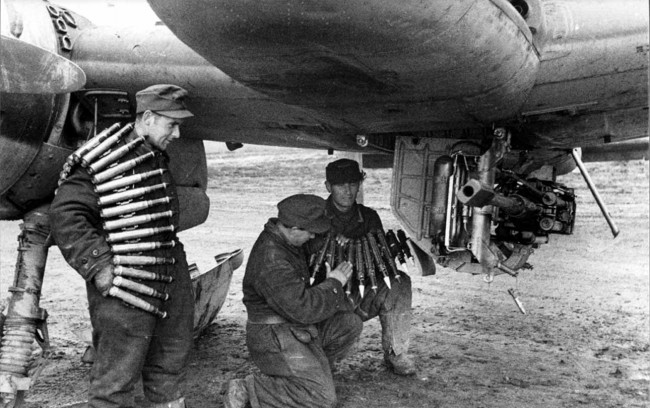 From September 30, 1942, the second battle unit, 4./SchG 2, was formed at Deblin-Irena Airport. The unit was sent to Africa after training. Three planes were destroyed during the flight. After arriving at the airport in Libya, November 18, 1942, the squadron had only four aircraft. The aircraft were not even used in combat and the engines needed to be repaired. In addition to clogging the filters with sand, two aircraft were lost due to engine failure. The remaining planes were moved from Staraset Airport to Tripoli , where they received new filters. But this exchange did not bring the expected effect. The last undamaged Hs 129 aircraft was captured by British troops on January 23, 1943 at the airport in Tripoli. The unit's personnel were evacuated to Bari, and after rearmament and reorganization, the unit was sent to the Eastern Front.

The Luftwaffe sent another unit to Africa. It consisted of Jabo Staffel JG 27 and JG 53 personnel located in Sicily. Thus was established 8./SchG 2. In the second week of December 1942, the unit was moved to Tunis and operated from El Aouina Airport. At the beginning it had 7 aircraft, after the addition in February 1943 there were 16. But always a number of aircraft were shut down due to engine failure. In May 1943, the squadron was moved to Sardinia, where it was briefly subordinated to the Fliegerführer Sardinien . 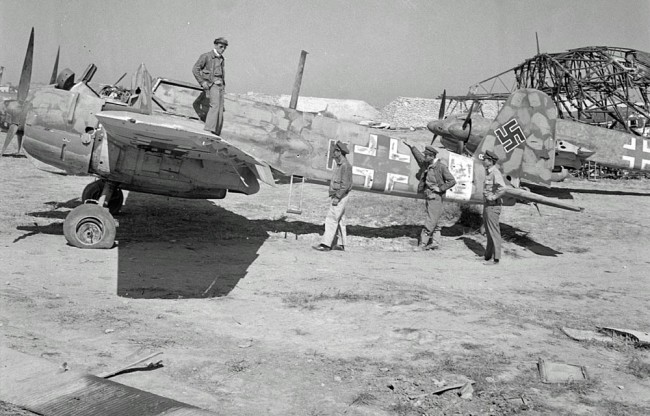 At the beginning of July 1943, the unit was moved to the Eastern Front. In February 1943, a special Jagdkommando Weisse was formed within the Luftflotte 4 , the commander was Lieutenant Colonel Otto Weisse. The unit fought with Soviet tanks, for example, in the spring of 1943 near Kharkov. A new headquarters, the Führer für Panzerjagdstaffeln, emerged from this unit. Under this command were gathered all squadrons armed with aircraft Hs 129. The concentration of combat units brought a positive effect. Before the Battle of Kursk, there were four squadrons at the front, subordinate to Captain Bruno Meyer.

On July 5, 1943, Operation Zitadelle, Battle of Kursk, was launched. Henschel Hs 129 aircraft operated from Mikoyanovka Airport, 20 km northwest of Kharkov. Fighter planes were used against attacking Soviet tank units. He entered the history of the air force on July 8, 1943. A group of aircraft attacked the attacking Soviet tanks in the I. SS Panzer Korps. First attacked a group led by Captain Bruno Meyer, then a group of 16 Hs 129 B-2 of 4./SchG 2, commanded by Captain Hans Matuschka, and finally the 8th / Schch 2 aircraft, commanded by Lieutenant Oswald. Lieutenant Orth's 8th / SchG 1 and Lieutenant Dornemann's 4th / SchG 1 also took part in the fighting. Plenty of aircraft and the proximity of airports allowed the constant attack of enemy tanks. Near Kursk, Henschely cooperated with the Fw 190 , which bombed Soviet infantry and anti-aircraft guns. During the three hours of fighting, Hs 129 aircraft destroyed 80 Soviet tanks, the equivalent of two tank brigades. Fighter jets that liquidated the tank breakthrough on the Orel - Karachev line operated similarly effectively.A total of 2,400 combat flights took place near Kursk, destroying 200 tanks and self-propelled guns.

On October 19, 1943, the Oberkommando der Luftwaffe changed the organization of combat units. SchG 1 and SchG 2 were abolished, units of dive bombers were renamed the battle, Schlachtgeschwader. A new anti-tank unit IV (Panzer) / SG 9 was created and other units were given a new designation. The leader of the Panzerstaffeln created Stab IV. 2 were reformed to 12. (Pz) / SG 9 and 13. (Pz) / SG 9, Panzerjägerstaffel JG 51 to 14. (Pz) / SG 9. In the fall and winter of 1943, Hs 129 units received replenishment, so they had 70 % of table state.

In March 1944, the 10th (Pz) / SG 9, led by Captain Ruffer , took part in the fighting east of Tarnopol, where he supported the attack of II. SS Panzer Corps. In April, this unit destroyed 80 tanks in the Crimea. Captain Ruffer himself destroyed 50 tanks. On December 27, 1943, the 11th (Pz) / SG 9 was withdrawn from the front and on January 20, 1944, it was transformed into the Erprobungskommando 26 training, which was located at Tarnewitz and Breslau-Udetfeld airports. Thus, in the spring of 1944, four squadrons of Hs 129 aircraft were at the front. In the summer of 1944, IV (Pz) / SG 9 aircraft operated mainly over Poland. Aircraft armed with a 75 mm cannon, in particular, had great success. They also took part in the fighting in Narva in October 1944 and in East Prussia. Hs 129 aircraft also operated on the Western Front.

After the invasion of Normandy, aircraft from the training unit II./SG 151 were deployed against Allied tanks. Five SG 101 aircraft, which were located at Paris-Orly Airport, also took part in combat flights. Hs 129, operating from Caen-Carpiquet Airport , was attacked by units of the British 7th Panzer Division. However, they made only a few flights due to Allied air superiority and insufficient fighter protection. Hs 129B aircraft served on the Eastern Front until the end of the war. 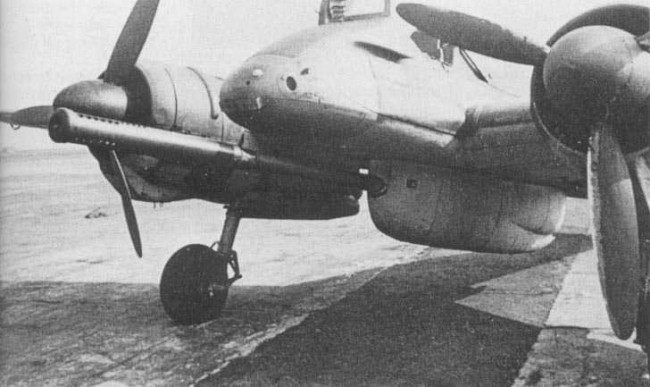 Henschel HS-129 B-3 with 75mm cannon, aka Panzerknacker

The best aces of the air force were, for example, Major Bruno Meyer, who commanded the Hs 129B squadron in Africa and was the commander of all four squadrons in Kursk. In October 1943 he became commander of the 4th (Pz) / SG 9. He flew the Hs 129 B-3 with a 75 mm cannon. 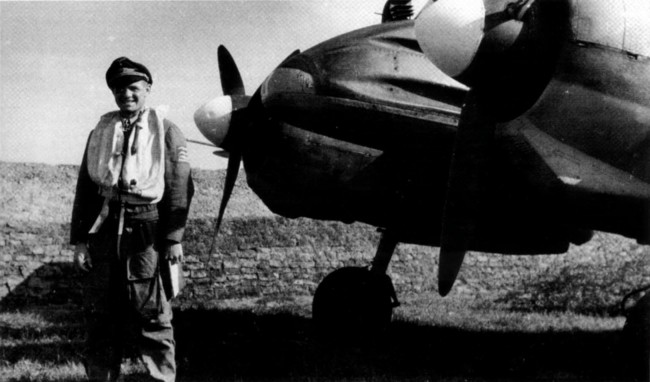 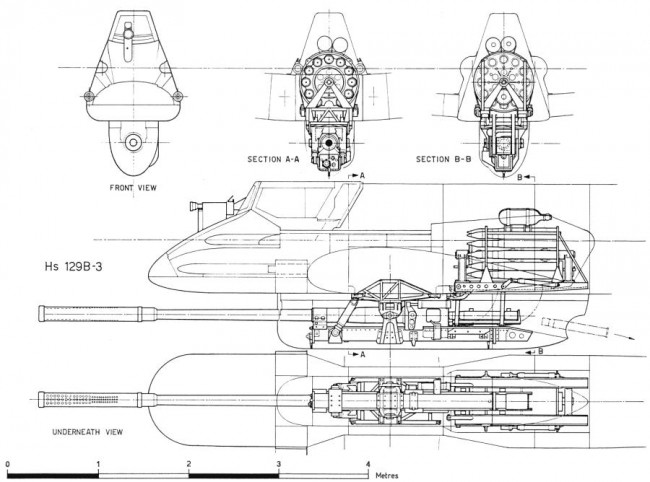 Henschel Hs 129 A / B aircraft were also used as training. They were in the arsenal of battle schools, SG 101 , which was at the airports in Reims, Paris-Orly or Clermont-Ferrand and since June 1944 in Brno and SG 111 at Stubendorf near Opole, Aalborg in Denmark and Ludwighurst.

The piloting improvement unit was Erg. Schlachtgruppe , formed in February 1943. At the end of the year, the designation was changed to SG 151 . Pilots Hs 129 were trained only until June 1943. Henschel Hs 129 aircraft also served in the Hungarian and Romanian air forces. The Hungarian Air Force planned to equip the Hs 129 units that used the Junkers Ju 87 . Eventually, a completely new unit was formed on July 1, 1943 in Nyiregyháza.

In August 1943, four Hs 129 B-1 and Hs 129 B-2 aircraft came to the Aviation Institute at Matyasföld Airport. One Hungarian pilot died during training. The planes were not repainted, they wore German insignia. After the training, however, the unit was not armed because the Germans were unable to supply the required aircraft. Three aircraft were briefly in the night fighter battalion 5/1, where they made 14 flights and returned to German troops.

The second foreign user of the Hs 129 was the Romanian Air Force. In the spring of 1943, the formation of a new 8th Assault Group ( Grupul Asalt ), equipped with IAR-81 and Hs 129B-2, began. The group commander was Captain Ioan Cara. Training on Hs 129 aircraft took place in Kirovograd. The training was completed at the end of June 1943, but it was not until August 1943 that Romanian pilots began flying combat over Ukraine. Obsolete IAR-81s were withdrawn from the units. In the autumn, the unit took part in the fighting near Zaporizhia, in the winter of 1944 near the Chernivtsi. In January 1944, the unit was supplemented by 23 Hs 129 B-2 aircraft. Romanian pilots have had a number of successes in battles with Soviet tanks. At Turgul-Frumos, they repulsed the attack of the tank brigade. At the time of Romania's surrender, the unit was at Ianca Airport with 32 aircraft, another seven aircraft were captured by retreating Luftwaffe units.

The first combat flight against German-Hungarian troops was carried out by the unit on September 8, 1944. At the beginning of September, the 60th Squadron was rearmed to Ju 87 D and Henschely was handed over to the 41st and 42nd Squadrons. The planes were often the target of errors when they were destroyed by Soviet anti-aircraft artillery. On October 16, 1944, the new 8th Asalt / Picaj Group was established. The group had one combat squadron and two dive squadrons. In October 1944, the Romanian Henschely operated over Hungary, but the flights were only sporadic. The group was relocated to Miskolc Airport. In mid-December 1944, Henschely launched flights over Slovakia, eg 19.12. attacked the railway station Rimavská Sobota .

In 1945, Romanian planes flew over Moravia and Bohemia. In the last week of the fighting, they operated near Prostějov . The last combat flight was made on May 11, 1945.After the end of the fighting, the unit had only 12 aircraft. The group returned to Romania in July 1945. The aircraft were in combat units until 1949, when they were replaced by Ilyushin Il-10 . The Soviet army captured several combat-ready Hs 129, one or two aircraft were presented at the exhibition of captured technology in Moscow in September 1943. The British captured two Hs 129 B-2 in Tunisia. One airworthy aircraft was transported to Britain in June. July 27, 1943 was incorporated into the group of captured aircraft, 1426th Flight. At the end of the war, one captured machine was transported to the United States and tested at Freeman Field.