When France was withdrawn from the war in June 1940, the French and British Purchasing Boards agreed that the French Wildcats they had purchased would be transferred to the UK. The seven aircraft already produced were redesigned to British standards by replacing French radio equipment and installing British armament. This included the removal of two guns and the installation of four .50 cal (12.7 mm) machine guns, two in each wing.

After this modification, the G-36As were formally renamed Martlet Mk.I by the Fleet Air Arm (FAA), then shipped to Canada for transport to the U.K. Eighty-one Martlet Mk.Is reached England, ten were lost on sunken ships. The Martlet Mk.Is were delivered to FAA units, 12 aircraft were assigned to the 804th Squadron at Royal Navy Air Station (RNAS) Hatston in Orkney in September 1940. A month later, part of this squadron formed the basis of the new 802nd Squadron

On 25 December 1940, two Mk.I Martlets of the 804th Squadron scored the first kill of an American aircraft in the UK. Lt. L.V. Carter and Sub-Lt. A. Parker shot down a Junkers Ju 88 bomber at Scapa Flow.

The Mk.I Martlet was not suitable for deck operations and was never operationally deployed on aircraft carriers. However, they were sometimes deployed for carrier take-off and landing training. 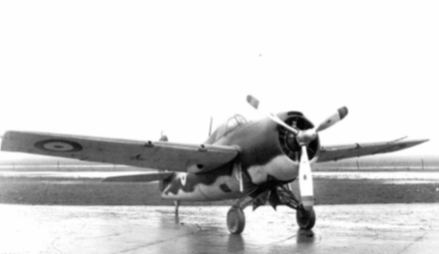 In 1940, the British Purchasing Commission ordered 100 Grumman G-36B aircraft under the designation Martlet Mk.II. The Martlet Mk.II was equipped with a 1,200 hp Pratt & Whitney R-1830-S3C4-G engine (civil designation for the R-1830-90). its performance was similar to the F4F-3A. The Martlet Mk.II made its first flight in October 1940. Grumman retained this aircraft for testing purposes. The first nine aircraft were delivered to the FAA in March 1941. They had fixed wings with a total of four .50 cal machine guns. The British then changed their contract to supply aircraft with six machine guns and folding wings and reworking those already delivered. 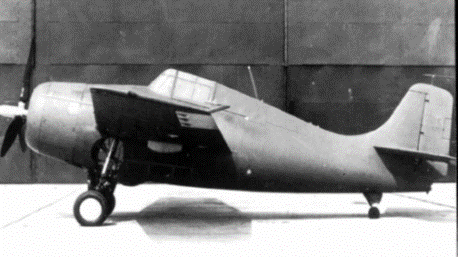 802nd Squadron was equipped with Martlets Mk.II in July 1941, a detachment of six aircraft was deployed on the escort carrier HMS Audacity for service at Gibraltar in September 1941. During this cruise, three Focke Wulf Fw 200 Condor were shot down, but the commander of the 802nd Squadron, Lt. Cdr. John Wintour. A small detachment of Martlet Mk.IIs was sent aboard HMS Audacity again in December 1941. During this cruise two Fw 200s were shot down, one due to an aerial collision. HMS Audacity was sunk on 20 December 1941, with five pilots surviving.

806 Squadron received Martlets Mk.II for its A Flight in August 1942, it was deployed aboard HMS Indomitable. During the escort to Malta, the ship was damaged on 20 August 1942 and A Flight was disbanded on the ship's return to England.

881st Squadron was equipped with Martlets Mk.II in July 1941. While serving aboard HMS Illustrious in May 1942, she took part in operations off Madagascar. During the operation, she supported the capture of Diego Suarez. The 881st Squadron scored seven kills along with the 882nd Squadron. The 882nd Squadron used the Mk.II from April to December 1942.

888th Squadron used the Mk.II from December 1941 to September 1943. The unit took part in Operation Torch in November 1942, scoring two kills. The 893rd and 1832nd Squadrons flew Mk.II Martlets only briefly and their involvement in combat operations cannot be verified.

Grumman developed a version of the Wildcat with slightly less power and equipped with the Pratt & Whitney R-1830-90 engine, which was known in the US Navy as the F4F-3A.

In October 1940, Italian troops invaded Greece and a Greek request for assistance soon followed. The U.S. government's response was to deliver 30 F4F-3A to Greece. Production of the aircraft began shortly thereafter, with the first aircraft leaving the production line on March 18, 1941. All 30 G-36s were ready for delivery by the end of the month.

The German invasion of Greece began on April 6, 1941, while the aircraft was en route. They were never delivered to Greece, the country fell before the end of the month. The British took delivery and landed the planes in Gibraltar. It is unclear what registration numbers the aircraft received, but they were assigned to 805th and 806th Fleet Air Arm squadrons.

The squadrons operated in the Western Desert of North Africa, and their main duties were combat assaults, convoy escorts and bomber escorts. Mk.III Martlets scored several kills with the 805th Squadron, one Italian fighter Fiat G.50 in September 1941 and four bombers in 1942. The squadron was later sent to the Far East and was later based in Kenya before returning to Britain. 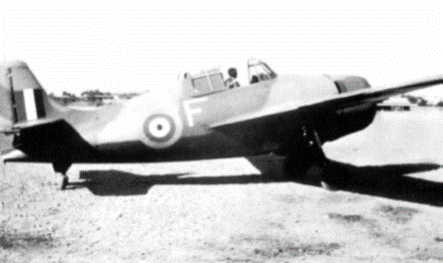 Under the 1941 Lend and Lease, the US government supplied aircraft to the Royal Air Force (RAF) and the Royal Navy Fleet Air Arm (FAA). Among the first aircraft delivered were 220 Martlets with Wright Cyclone engines, designated as Martlet Mk.IV.

The Martlet Mk.IV (also known as the F4F-4B) had folding wings with six .50 cal machine guns and a 1,200 hp Wright R-1820-40B Cyclone engine. The first aircraft was delivered on 27 February 1942, the last in late November. Three aircraft were lost in transit.

The British sent 17 Mk.IV Martlets to Mombasa in Kenya, and the rest were sent to England. The first unit to receive a Martlet Mk.IV was the 892nd Squadron, which received six at NAS Norfolk in July 1942. After transport to England, the squadron performed convoy escort duty from aboard HMS Archer from 1943 onwards.

The Mk.IV Martlets served in 26 FAA squadrons, on all the major battlefields of the war. The first operation in which Mk.IVs played a major role was Operation Torch, the invasion of North Africa in November 1942. During Operation Torch, the Mk.IV Martlets were used by the 882nd Squadron (HMS Victorious) and 893rd Squadron (HMS Formidable). The 882nd Squadron scored several kills of Vichy and German aircraft. One 882nd Squadron pilot even captured an airfield near Algiers. The 882nd and 893rd Squadrons had aircraft with American markings, as the Vichy forces surrendered to the Americans rather than the British.

After Operation Torch, the Mk.IV Martlets took part in further operations, against Sicily, Salerno and the landings in southern France in August 1944. In addition, Mk.IVs took part in convoy escort and anti-submarine duties in the Mediterranean and Atlantic. Less well-known is the deployment of Mk.IV Martlets in the Pacific. FAA Mk.IVs took part in the invasion of Madagascar in 1942, and at least three squadrons supported the Americans in combat in the Coral Sea and Solomon Islands aboard the USS Saratoga from May to July 1943. FAA Martlets scored a single kill against the Japanese. A Martlet Mk.IV of the 888th Squadron shot down a flying boat, the Kawanishi H6K, over the Bay of Bengal in July 1942.

After shifting production of Wildcats from the Grumman factories to General Motors Eastern Aircraft Division, the US Navy ordered 1,800 FM-1 for service on escort and light carrier carriers in the Atlantic and Pacific. 839 were eventually delivered to the US Navy, before changing production to the FM-2 and a further 311 FM-1s were delivered to the Royal Navy Fleet Air Arm under the Lend Lease.

Several Mk.V Wildcats were assigned to the 881st Squadron, which served aboard HMS Pursuer on convoy escort duty. The squadron shot down a Heinkel He 177 and a Focke-Wulf Fw 200 on the evening of 12 February 1944.

During Operation Tungsten in April 1944, Wildcat Mk.Vs were deployed on carrier strike groups intended to sink the German battleship, Tirpitz. The 881st Squadron was one of them, still aboard HMS Pursuer.

The next deployment of the Mk.V Wildcats was during Operation Anvil-Dragoon, the landings in southern France in August 1944.

They also served in the Far East. The 834th Squadron deployed a detachment of six aircraft to India.

The Wildcat Mk.V was in the armament of 36 Squadron FAA.

The first deliveries of Wildcat Mk.VIs went to the 881st Squadron, which took part in the invasion of southern France in August 1944 aboard the HMS Pursuer.

881 Squadron also took part in actions off the coast of Norway before being re-equipped on the Grumman Hellcat Mk.II in March 1945.

In the final weeks of the war in Europe, Wildcat Mk.VIs from the 882nd Squadron took part in battles with German fighters from aboard the HMS Searcher. On 26 March 1945, eight Messerschmitt Bf 109G attacked a squadron of Avengers and Wildcats off the Norwegian coast. The Wildcats reported shooting down four Bf 109s.

The UK was the only country to use these machines apart from the US.