Both High Contracting Parties obligate themselves to desist from any act of violence, any aggressive action, and any attack on each other, either individually or jointly with other Powers.

The Governments of the two High Contracting Parties shall in the future maintain continual contact with one another for the purpose of consultation in order to exchange information on problems affecting their common interests.

Should disputes or conflicts arise between the High Contracting Parties shall participate in any grouping of Powers whatsoever that is directly or indirectly aimed at the other party.

The present Treaty is concluded for a period of ten years, with the proviso that, in so far as one of the High Contracting Parties does not advance it one year prior to the expiration of this period, the validity of this Treaty shall automatically be extended for another five years.

The present treaty shall be ratified within the shortest possible time. The ratifications shall be exchanged in Berlin. The Agreement shall enter into force as soon as it is signed.

In the event of a territorial and political rearrangement in the areas belonging to the Baltic States (Finland, Estonia, Latvia, Lithuania), the northern boundary of Lithuania shall represent the boundary of the spheres of influence of Germany and U.S.S.R. In this connection the interest of Lithuania in the Vilna area is recognized by each party.

In the event of a territorial and political rearrangement of the areas belonging to the Polish state, the spheres of influence of Germany and the U.S.S.R. shall be bounded approximately by the line of the rivers Narev, Vistula and San. The question of whether the interests of both parties make desirable the maintenance of an independent Polish States and how such a state should be bounded can only be definitely determined in the course of further political developments. In any event both Governments will resolve this question by means of a friendly agreement.

With regard to Southeastern Europe attention is called by the Soviet side to its interest in Bessarabia. The German side declares its complete political disinteredness in these areas.

This protocol shall be treated by both parties as strictly secret.
Moscow, August 23, 1939.

For the Government of the German Reich v. Ribbentrop

Plenipotentiary of the Government of the U.S.S.R. V. Molotov 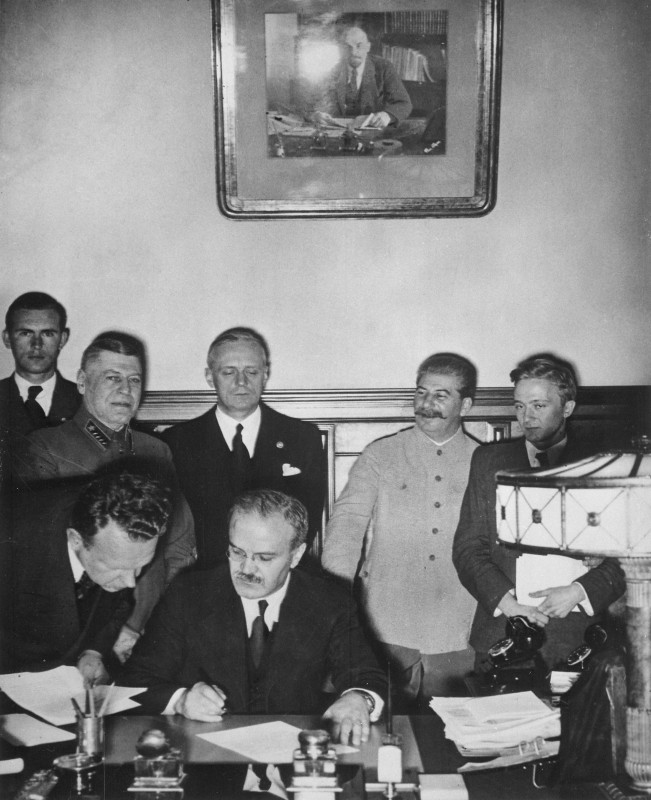 Molotov signing the pact. Behin him standing Ribbentrop (in black) and Stalin (second from the right)