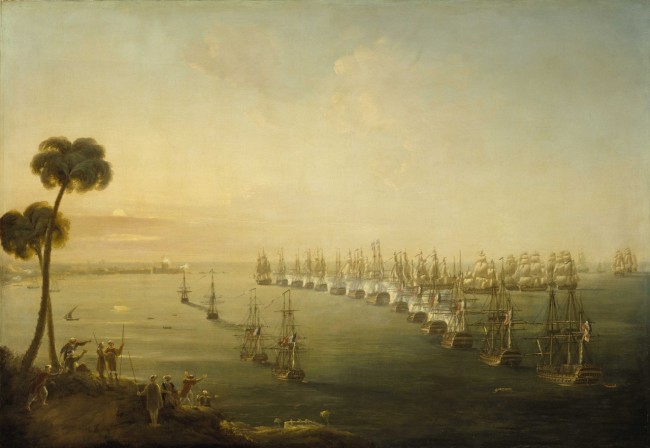 In the spring of 1798, Napoleon Bonaparte was planning a major invasion of Egypt. The Directory sensed a threat in his person, so it readily gave permission for this campaign. The purpose of this action was to cut England off from her colonies and threaten the colonies in India.

Therefore Napoleon began to assemble large numbers of merchant and warships in the ports of southern France. A French fleet of 13 ranking ships and 400 transport vessels landed French troops at Alexandria in July. The transport ships then returned to France, and eventually only a war squadron commanded by Vice-Admiral François-Paul Brueys D'Aigalliers from aboard the 120-gun L'Orient remained off the Egyptian coast.

Admiral Brueys, with his fleet of 13 row boats, 4 frigates and 5 gunboats, took refuge in the Gulf of Abu Kir, 15 miles from Alexandria. His mission was to support Napoleon's troops and secure sea communications to supply his army.

The English were as yet only guessing at what should be the objective of the French action. To reach the French squadron, Nelson was sent with a fleet of 13 forty-four-gun row ships, one fifty-gun ship and one brigade. Its flag flew atop the mast of the 74-gun Vanguard. His orders were to "follow the French to any port in the Mediterranean and Adriatic seas, the Greek Archipelago, and even in the Black Sea" and, upon finding them, to "capture, sink, burn, or otherwise destroy the enemy fleet."

After a long search, Nelson finally encountered the anchored French squadron shortly after noon on August 1, 1798. An agitated Nelson immediately signalled "Prepare for battle!" but then calmed down and invited his officers to lunch. He bid them farewell with smug words: "By this time tomorrow I shall have earned the title of Lord or Westminster Abbey." While the title of Lord was the usual reward for senior officers, Westminster is where England's most famous figures are buried.

Around 5pm in the evening, the French spotted English ships arriving at the bay. At that very time some of the crews of most of the French ships had gone ashore in boats to fetch fresh water. Brueys called a council of war, at which it was decided to wait and fight on the spot, as it was impossible to man the guns and handle the sails at the same time with incomplete crews. Although the sailors in the boats were signalled to return immediately, they clearly could not return in time. Moreover, the French hoped that the British would be frightened by superior numbers and the battle would not occur. Although the English had one row ship more, the French had more powerful vessels. While the English had a total of 1,012 guns and 8,000 men at their disposal, they were opposed by 1,183 guns and 10,000 French sailors. Moreover, Brueys relied on the protection of the shoals among which his ships were moored, and hoped that Nelson would not venture among them.

Nelson, however, did not shy away from the high risk and his ships began to sail between the shoals. Only Captain Troubridge's Culloden was stranded on them, and he was then unable to intervene in the fight until two o'clock at night. The other ships, however, sailed through the narrows unscathed and began to carry out Nelson's battle plan.

Nelson rejected the classic ranking tactics, which involved pitting one English ship against her French counterpart at a time. Instead, quite unexpectedly and boldly, a section of his ships, led by Captain Thomas Foley on the Goliath, came between the anchored French privateers and the shore. This pinned the front rank and the centre of the line of French ships on two sides, giving Nelson considerable local superiority. 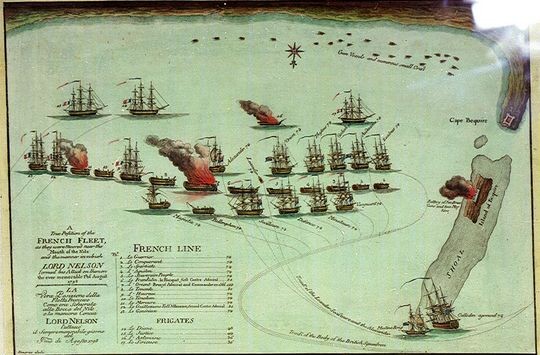 The actual position of the French fleet as it anchored near the mouth of the Nile, and the manner in which Lord Nelson attacked it.
Robert Dodd, National Maritime Museum (PW4704), commons.wikimedia.org

The first cannon shots were fired at dusk, and just half an hour after the firing began, the first French ship was destroyed.

The captain of the French frigate Serieuse made the mistake of opening fire on the incoming Goliath at relatively long range. Before the French could reload, Orion came within short range of Serieuse and tore her side open with a volley. The Serieuse soon sank.

So the other English ships joined the battle. Audacious boldly sailed between the French ships Guerrier and Conquerant. The seventy-four-gun Bellerophon fearlessly confronted the L'Orient, which, with its 120 guns, had almost double the firepower. The 50-gun Leander exploited another gap in the French line and cut off the French beachhead from the rest of the fleet. Nelson's Vanguard anchored opposite the equally powerful Spartiate and engaged her in an artillery duel.

The training of the English gunners was of a much higher standard. The English were able to fire a volley every minute, while the French guns fired one volley every three minutes. It also appeared that the guns of the French ships on the landward side were littered with barrels, ropes and many other articles of daily use, which limited their firepower. Nevertheless, the French fought fiercely.

Admiral Brueys was twice wounded, but remained on the bridge of command until he fell to enemy fire at about half past seven. A cannonball nearly tore the brave admiral in two. Flag captain Luc-Julien-Joseph Casabianca took command, but was severely wounded in the head an hour later.

However, Bellerophon was also crushed by the fire of L'Orient. At around 8pm, the badly damaged and mast-less Bellerophon cut her anchor lines and, with 197 dead and wounded on board, drifted with the current as she struggled to get out of range of the French guns. Fire on L'Orient was now transferred to Swiftsure and Alexander. 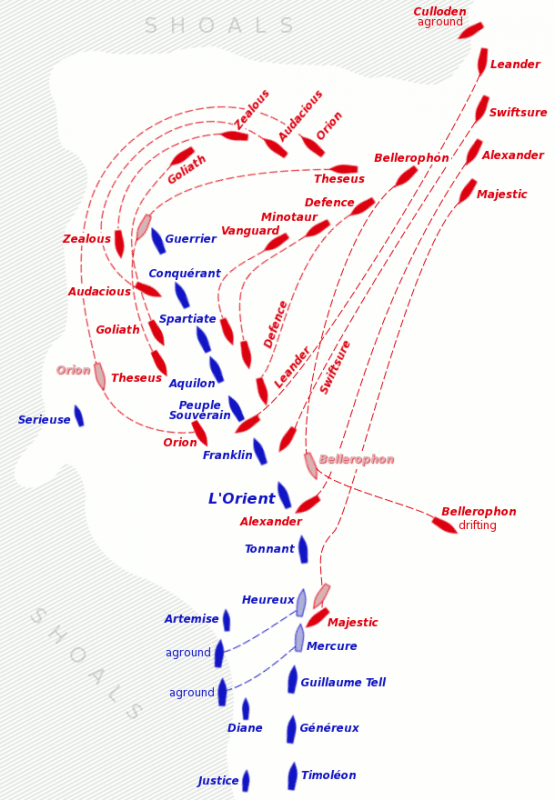 Map of ship positions and movements during the Battle of Aboukir, 1-2 August 1798. British ships are marked in red, French ships in blue. Intermediate ship positions are shown in pale red/blue.
commons.wikimedia.org

So a fierce battle continued between the Vanguard and the Spartiate. At eight o'clock, Nelson was wounded; a cannonball shrapnel hit him in the head. He was carried to his quarters, but after treatment he returned to the deck, where he saw the enemy flagship in flames. The L'Orient stood ablaze.

In a desperate struggle with the flames, the French sailors nipped several fires in the bud, but unfortunately the flames soon flared up again and elsewhere. The fire was fed heartily by the oil coatings that had been applied to the deck of the L'Orient. By 21.45 the situation had become critical, with the fire spreading through the rigging. The entire crew of the second gun deck was recalled from the 24-pounder guns and engaged in fighting the fire. However, the situation was hopeless, buckets were strewn about, the fire axes could not be reached and English balls had destroyed the water pumps. The ship stood bow to stern in flames. 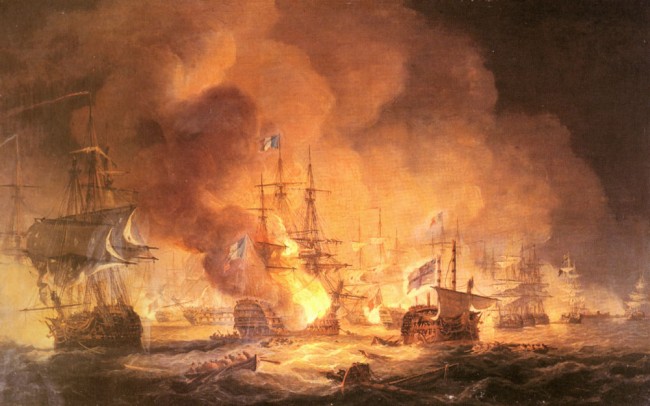 The Battle of the Nile (amidst the burning L'Orient)
Thomas Luny, commons.wikimedia.org

The commanding officer, Rear Admiral Honoré-Joseph-Antoine Ganteaume (who had taken over from the wounded Casabianca), took the last desperate act in a fateful situation - he ordered the powder magazine flooded, even though it meant the ship would be defenceless. It was too late, however. The fire was clearly spreading faster than the water could advance. Ganteaume, therefore, in a completely hopeless situation, ordered the ship abandoned. With shouts of "Save whoever you can!" the French sailors frantically lowered their boats or plunged straight into the waves, where they clung to the wooden debris from their shot-up ship, which literally littered the sea. A hundred or so men squeezed into a sloop, others were rescued in a half-burned boat, but many of the wounded burned alive on the blood-stained decks of the L'Orient. At around 10:30, L'Orient exploded with terrifying force. The massive blast killed much of the crew, and the 15-ton rudder was thrown up like a piece of plank. The explosion severely damaged neighbouring ships, especially the English Alexander and the French Franklin. A rain of burning wood and debris rained down on the surrounding vessels.

It is not entirely clear how many men of the crew of more than 1,000 on the L'Orient survived the horrific inferno. The English claimed as few as 70, matching the number of sailors from the French flagship's crew rescued by English ships. Determining the exact number is also made difficult by the fact that the crew of L'Orient was not complete during the battle, missing at least half of the twelve-pounder gun crews, for example. The French frigate commander, Rear Admiral Denis Decres, reported after the battle that the crew of the L'Orient had been rescued, with a total of about 760 men.

The terrible event interrupted the fighting for a few minutes, the guns fell almost religiously silent, but then the cannonade was unleashed anew. In the south of the battlefield, the French still had some superiority. Only the Alexander and the badly broken Majestic stood against them, bitterly fighting the two French ships. So Goliath and Theseus rushed to their aid. The balance of power quickly reversed. The French fregatta Artemis caught fire, her crew lowered the flag and abandoned her in their boats. She sank the next day.

The French privateers Heureux and Mercure caught fire, one by one cutting their anchor lines and drifting towards land in flames. They ran aground and their crews, fired upon by the Goliath, Theseus, Alexander and Leander, surrendered. The shot-up French Tonnant became a floating wreck. In contrast, another French ship, the Timoleon, ran aground almost undamaged as she attempted to leave the bay.

The fighting continued until dawn, the exhausted gun crews falling asleep in places under full fire. Over the course of the morning, the rear voyage commander, Admiral Pierre Villeneuve, broke away and escaped with two line ships (Genéréux and Guillaume Tell) and two frigates (Justice and Diane). He did not intervene in the battle throughout, reportedly due to unfavourable winds.

The rising sun illuminated the eerie scene. The French fleet was completely destroyed, 1,700 French sailors were killed, 600 wounded and 3,000 fell into captivity. The English paid for their victory with the deaths of 213 men and the wounding of 677.

Thanks to this victory, the English achieved supremacy in the Mediterranean. The subsequent blockade of Egypt made it impossible to supply Napoleon's army and prevented his potential campaign into India. Napoleon had to abandon his troops and return to France, his army destroyed. 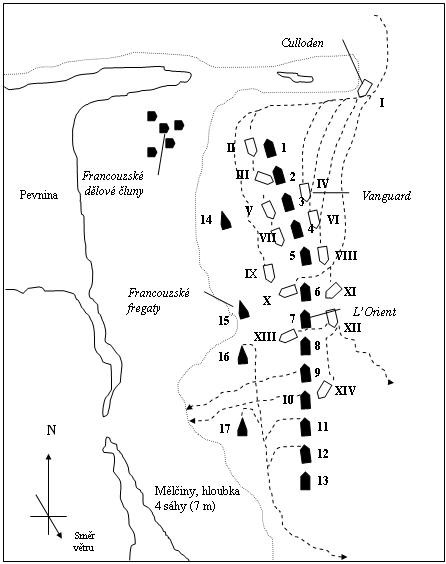