URL : https://www.valka.cz/Simonds-Guy-t125087#425119Version : 0
RoBoT MOD 10 years ago
URL : https://www.valka.cz/Simonds-Guy-t125087#425988Version : 0
RoBoT MOD 10 years ago
Guy Simonds was born on 23. April 1903 in English Bury St edmunds. Edmunds. His father was a british army officer who settled in Canada. In the years 1921 to 1925 he attended the Royal high military school in Kingston, which he attended on an excellent. During his studies he received a number of awards for academic achievements and exemplary behavior. After the elimination, he joined in 1926 to the Canadian permanent forces and served in the Royal canadian bicycle artillery in Petawawa and Winnipeg. In the years 1936-1938 he studied the captain Simonds Staff school in the English Camberley. Her commander have highly valued his intelligence, ability to in-depth understanding of military theory and the perception of the specific needs of modern warfare. After returning to Canada in the spring of 1938 became a professor at his alma mater. Also thanks to his study of the management of mechanized combat was a major Simonds considered one of the best canadian military strategists.

The headquarters of the corps in July 1944 it moved to France. At this time the allied offensive in Normandy to an abrupt halt. Simondsův choir stood at the head of four important operations that should this status change – ATLANTIC, SPRING, TOTALIZE and TRACTABLE. Simonds showed that is good in neutralizing the German battleships and overcoming antitank defense elements. Also initiated the establishment of the vehicle Kangaroo, which was an armored vehicle produced delafetací spg Priest (later made of tanks Ram). 27. September 1944, temporarily took over the command of the 1. canadian army. His tactical maturity demonstrated during the liberation of the mouth of the river Scheldt. However, general Crerar returned to the head 1. the canadian army and Simonds to the head II. the canadian corps and carried out the allied campaign in northwest Europe. Simonds as commander earned great reputation. For the best of the canadian commanders thought him a british field marshal Montgomery or the american general Bradley.

After the war he remained Simonds in England at the Imperial defence college. Jiř in 1949, but returned to Canada and was appointed commander of the Royal military college in Kingston, namely the school, which years ago graduated from. In the years 1951 to 1955 he held the position of chief of the general staff. In this function, to ensure the reorganization of the canadian army for the needs of NATO and the ongoing conflict in Korea. He was a supporter of conscription and of close relations with Great Britain, přočemž criticized the government's efforts for deeper military alignment with the US. Died 5. may 1974 in Toronto. 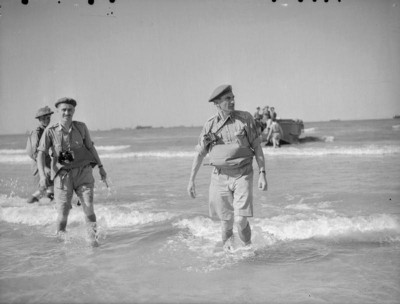