Special lightweight vehicle designed primarily for the implementation of the survey. It is produced since 1972 by Alvis in Coventry as successor to heavy Alvis Saladin (6×6).
In 1965 was founded the experimental tracked armoured vehicle TV-15 000 with the engine Rolls Royce B60 on the performance of 130 hp, which was later replaced by petrol Jaguar J60, which allowed the vehicle to achieve the desired speed. Of the vehicle resulting from this series bear the designation of CVT(T)=Combat Vehicle Reconnaissance ( Tracked)
A distinct novelty was aluminum armor, and hydropneumatic suspension. Used were broad bands. These three innovation guaranteed the small weight, small ground pressure of 0.36 kg/cm2, and excellent maneuverability in difficult terrain.
23.1.1969 supplied by Alvis, the british army of the first of 30 ordered prototypes. Marked it P1-P17 and named the Scorpion. Delivered was also 6 prototypes, P18-P30. In march 1970, were completed in the test and the army has ordered 275 Scorpionů with a cannon caliber 76 mm and 288 of the Scimitarů with a gun caliber of 30mm. A year later, he started running at full serial production.


FV 101 Scorpion was the first british surveillance vehicle on the crawler. In addition to the survey, the vehicle is intended to support the infantry, to protect the advancing wings, eskortováním convoys in dangerous territory. The vehicle has proved its worth several times during a mission to the united nations.
In 1979 the RAF for the protection of airports and landing areas orders 150 units of Samson, Scorpion, Spartan, Sultan. In November 1981, it is getting the air regiment from Catterick. By mid-1987 it was produced 3 500 cars on a common chassis-based samonosného of the fuselage. The vehicle uses 21 states.


The hull of the Scorpionu is of welded sheets of armor on the aluminum base (aluminum + tin + magnesium). This armor safely protects the crew against the effect of bullets caliber 7,62 mm and before střepinami of the works of the caliber of 105 mm having a radius of impact of 30 m, from the front resists rážím 14.5 mm from a distance of 200 m.
In the front on the left is the designated driver to the right of it is the engine compartment. Fighting compartment together with the towers in the rear part of the vehicle and is connected with the space of the driver.
Management is performed using the two levers, the shifting pedal, the driver observes the terrain through the širokoúhlového periscope which it is possible to replace the device for intensification of the residual light and the image II. generation of NV 39S. In the tower are two of the martial habitat, to the left of the commander - the features 7 periskopů and optical high-vis bracket aimer device No 71 in the angle range of 85°. For shooters are meant 2 gun and an optical sight No 54.
On the right side of the cannon is located noktovizorový targeting system L2A1 or L3A1 (otherwise the SS 100 and
SS 110). Before the power of a strong light it protects the elektooptický converter with iridiovou the plate, and before a twinkle in the shot of the electromagnetic shield, which is automatically triggered by pressing the trigger.
Sights are cloněny only at the time of the tracking device. Each of them has its own windshield wipers. Scorpiony are not equipped with termovizí. Shooting or pointing guns can be made only by the shooter, from the other positions can not control the gun.
The Tank was equipped with 3 radios VRC 321, VRC 322 and VRC 353. In the back of the tower are two radio VRC 353. All the equipment is supplied with electricity of a voltage of a 28.5 In. Strj has four accumulators.


Armament : the Main armament is a cannon L23A1 gun 76,2 mm length 23 calibres. It is actually a lighter version of the gun L5 of the REV Alvis Saladin. Max. the range is 5000 m with a max. the speed of firing 6 rounds./min, elevation angle from -10° to +35°, the length of recoil is 280 mm. The elevation of the cannon and the movement of the tower is said to be controlled manually. To fire used ammo: L29 HESH, L24 HE, 32 Smoke (dýmový),L33 Canister ("brush" on the destruction of the living forces to the distance of 100 m). The total is in the vehicle vezeno 40 ks. ammunition. Additional armament is yoked gun L43A1 r. 7,62 mm with a supply of 3 000 rounds of ammunition located to the left of the cannon. 4 launchers zadymovacích the shells are placed on the front corners of the tower.
On the wishes of the importers was part of the Scorpionů equipped with belgian cannon Cockerill Mk 3 caliber 90 mm.
Engine Scorpionu is a 6-cylinder gasoline engine Jaguar J6 on the performance of 195 kW at 5 000 rpm, (7.75 per:1). Part of the vehicle was again for reasons of export equipped with a diesel engine (Botswana, Chile, Spain).
The mechanical powertrain TN15 contains a gearbox (7 stupňu forward and backward).
For sailing around the vehicle, places the special webbed pontonky, which increase the hydrostatic buoyancy of the vehicle. The movement in the water guaranteeing belts - 6,5 km/h or a screw - 9,5 km/h.


In 1994 the british army knocked out the last of the Scorpionu FV 101 because of the non-conforming properties - the demands of the current war field does not fit the cannon L23A1. The other versions have to be downloaded around the year 2007.


URL : https://www.valka.cz/FV101-Scorpion-t6325#144415Version : 0
palič 17 years ago
Navigational capabilities of the vehicle a series of CVR(T) FV 10x are based on the same principle, which was used by the allied DD tanks – namely, to enlarge the "effective volume" of erecting the gumotextilní barriers around the vehicle and the sampling torque marine "propeller" of the drive's driving track
From the british vehicle series CVR(T) were preparations for the boat already in the past dismantled, but for example the belgian Scorpiony and Scimitary they are still equipped with...
The accompanying images are captured of the vehicle
- with gumotextilní "barrier" stored under the cover on the fender around the entire vehicle,
- high gumotextilní "barrier" at the exit of the water (for navigation is the ceiling of the tower just above the water level, note how high the back trace of water on the wall "barrier")
- details of the assembly of the raceway of ships "propellers" and the sheet metal shields for the driving track


URL : https://www.valka.cz/FV101-Scorpion-t6325#144618Version : 0
palič 17 years ago
The vehicle CVR(T) FV 101 Scorpion in the number of 17 pieces also used Tertio de Armada, therefore, the Spanish Naval infantry. The vehicles are partially adjusted (the placement of the diesel power unit is not installed shooting the lamp on the mask of a gun, the installation of a more efficient extraction of flue gas with fans on the tower etc), in addition to the national designation is used a distinctive marking INFANTERIA DE MARINA and the sign at the site of the installation of a turret of the headlamp..


URL : https://www.valka.cz/FV101-Scorpion-t6325#144639Version : 0
palič 17 years ago
The export variant of the CVR(T) Scorpion with a cannon caliber 90 mm Cockerill Mk.3 are used in addition to other countries also armed forces of Indonesia (4 pictures of vehicles in fancy camouflage, note the mounting the machine gun on the tower) and Venezuela (1 frame).. 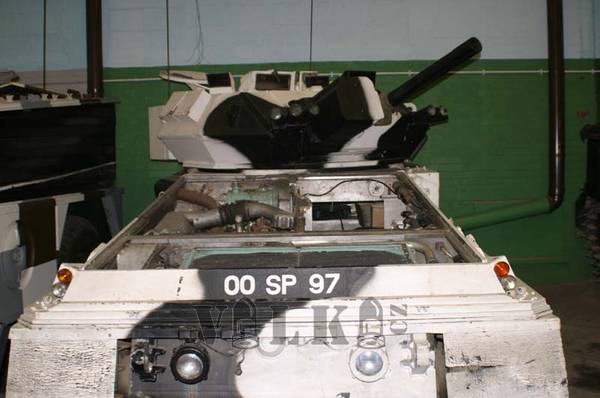 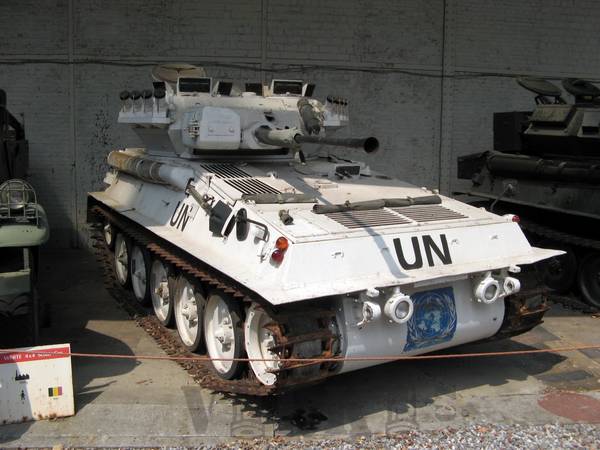