He was born 6. June 1901 on the island of Surabaya in a poor family of immigrants from Bali. Father had to work very hard to give a son to a Dutch school. At the time of the studies was staying at my father's friend Cokroaminota, who in 1912 founded the organization Sarekat Islam. Frequent guests in his house were the marxists, from which the young Sukarno many picked up, but marxist never happened.

In 1921 he enrolled at the high technical school in Bandung and in 1926, the studio has successfully completed and as one of the three Indonesians could boast the title of engineer. Sukarno refused a generous offer to work in the city administration of Bandung and instead he devoted himself entirely to political work. From 1915 he was a member of the youth organization of the Jong Java, imbued with a mixture of nationalism, islam and marxism. And so in a time when many wealthy Indonesians wore european hats, Sukarno on his head put on the black pico - sign of the indonesian nationalists, which they then wore throughout his life.

My classmate, an engineer Anwarim he opened a design office, in order to obtain money to publish your own magazine - Indonesia Muda (Young Indonesia). In it are tried about the connection of ideas of nationalism, marxism and islam in the idea, which would have brought Indonesia to freedom and unity. On this idea then in 1927 founded their own political party, PNI - National party of Indonesia. In December 1929 he was Sukarno arrested and sentenced to four years in prison for "criminal conspiracy against the government of the Dutch east Indies", but already in 1931 he was released on amnesty. His release followed a series of celebratory rallies his followers, whose ranks in just two years, considerably increased in size. Sukarno discovered in himself a figure of talent and that helped him go across the country to address his new fans.

After the mutiny on the cruiser De Zeven Provincien in 1933, was his party banned, and Sukarno sent into exile on the island of Flores. There, completely isolated from their supporters, devoting himself to literary activities, inter alia, he wrote several plays, he studied islam and he was inspired by the ideas kemalismu. When he was after five years for health reasons, released, began to teach at a muslim elementary school in Sumatra, and in doing so under a pseudonym published articles in a variety of nationalist journals throughout Indonesia. In them again emphasized the necessity of the unity of the three pillars of the indonesian national movement: nationalism, islam and socialism.

12. February 1942 japanese troops landed on the eastern shore of Sumatra - entered the country second world war. The Dutch may have tried to Sukarno with his family move out of range of the Japanese, but he still fell into their hands. The japanese commander in Sumatra realized Sukarnovu position and offered him cooperation. Sukarno knew that resistance would bring indonesian people great losses and decided on the eye of collaborating with the Japanese to accept.

The party split into two groups - Sukarno led's, which cooperated with the Japanese, the second group went into the underground. Initially thought most Indonesians the Japanese as liberators from the Dutch colonial yoke. However, this soon changed, on the islands began its despotic Kempetai - japanese secret police. Torture, imprisonment and executions of those who even hint lined up against the Japanese, were rampant. In the jungle, therefore, began to create partisan detachments, the invading japanese crew. When in march 1945 reached the national-osvobozenecký the resistance of the top, decided to the japanese command of the establishment indonésko-japanese committee and the 7. August approved the establishment of the Preparatory committee for independence of Indonesia. Three days after the japanese surrender, 17. August 1945, Sukarno decreed the independent the republic of Indonesia, and was then elected its first president.

Dutch this act did not recognise and it took another four years before independence consummated. In 1948, occupied by Dutch paratroopers even the presidential palace in Jakarta and Sukarno was arrested and jailed. But the pressure of international public opinion forced them to release him. A year later, were announced United states of indonesia and Sukarno once again stood in the forefront as the president of this federation. 17. December 1950 to become president of the uniform of the republic of Indonesia and was by him until 1967.

Sukarno gained great international authority and became speaker of the the non-aligned Movement, which was established at a conference of 1955 in Bandung. With the message of this congress then in 1956, used to drive all over almost the whole world, from the United states and Germany up to after the so-called people's democratic states of eastern Europe. Advocated friendship with communist China and vice versa for the enemy thought the British created the Malaysian federation, which he led until the mid 60's. years of military conflict.

The autocratic way of government, together with growing economic problems, however, undermined his position within the country. When with his consent to try and group of left-wing officers ' coup in 1965, and the action failed, he was removed from power and replaced by the general Suharto. Officially, he was deprived of the presidential office in march of 1967, when for a year he spent in house arrest in bogorském palace.
He died 21. June 1970 in a prison hospital in Jakarta.. 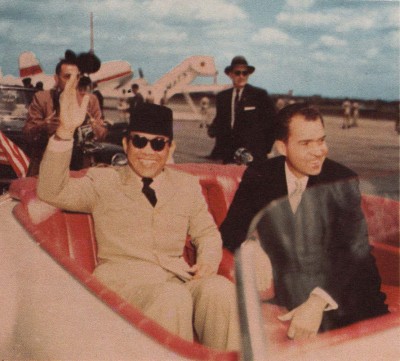 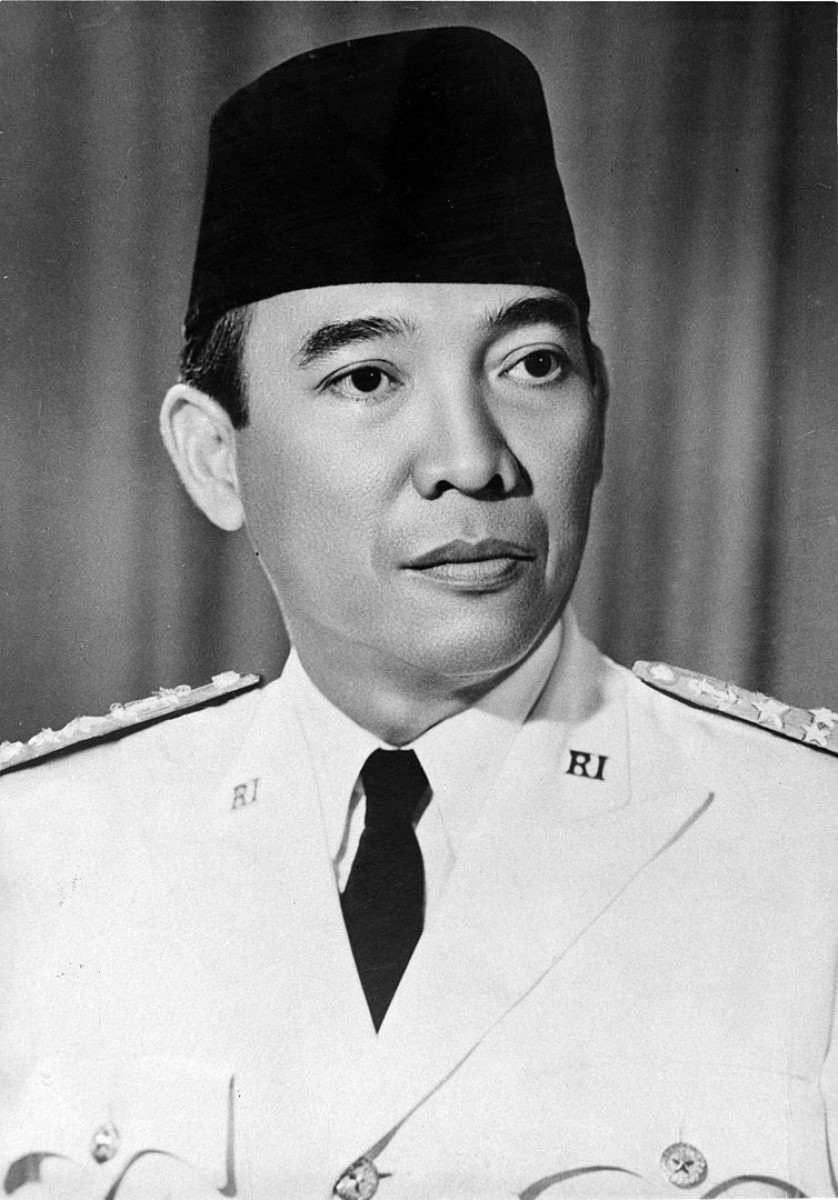 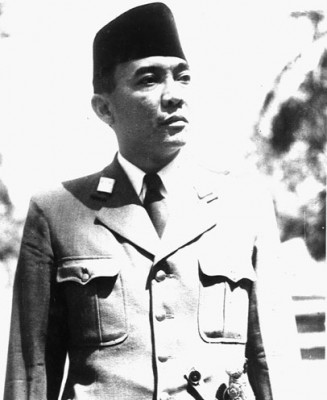 URL : https://www.valka.cz/Sukarno-Ahmed-t21854#89121Version : 0
Vladimír Šilhán 16 years ago
Diskuse
does anyone know if Sukarno was granted any military rank? I know he was not a member of the army, but in many period photographs he is wearing something that resembles a military uniform rather than a civilian suit. That is, whether he had a rank such as "leader" or generalissimo, etc. 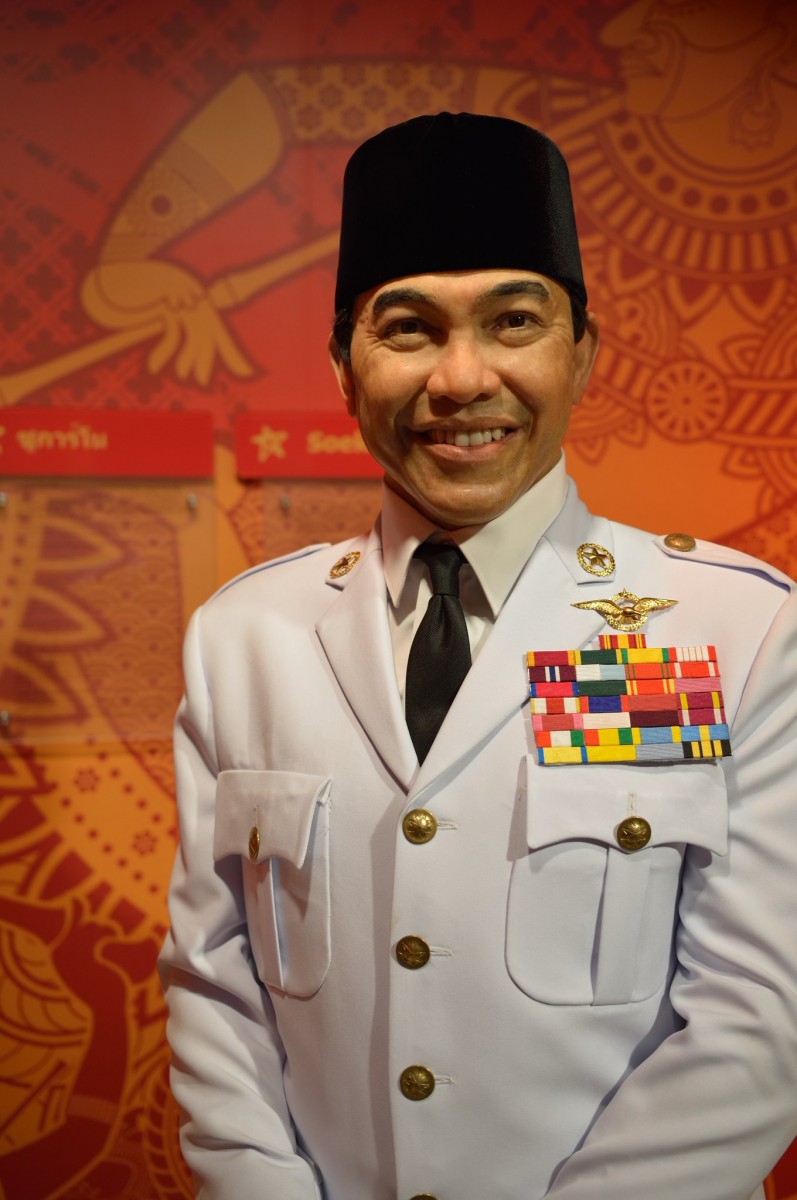 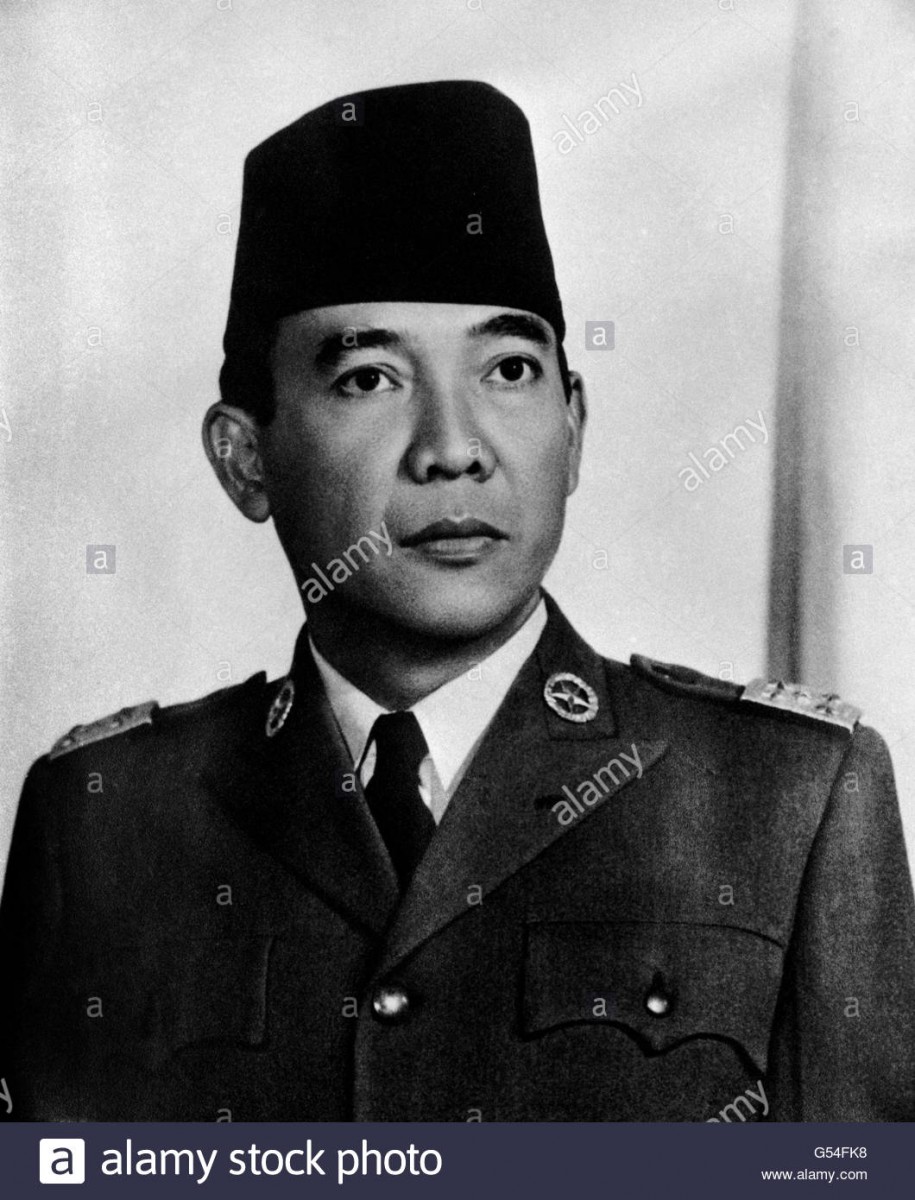 President Sukarno of Indonesia, who ordered on 19/12/1961 total mobilisation in a reported bid to 'free' West New Guina from the Dutch.